Engraving of the Duchess published by La Belle Assemblée in 1829

Born as the younger daughter and third child of the politician Edward Clive, 1st Earl of Powis, and the mineral collector Henrietta Clive, Countess of Powis, she was paternally granddaughter of Major-General Robert Clive, 1st Baron Clive, and maternally granddaughter of Henry Herbert, 1st Earl of Powis. She married Hugh Percy, Earl Percy, son of General Hugh Percy, 2nd Duke of Northumberland, on 29 April 1817. On 10 July the same year, her father-in-law died and her husband succeeded to the dukedom.

In 1825, the Duke and Duchess of Northumberland attended the coronation of King Charles X of France as representatives of King George IV of the United Kingdom.[1] Charlotte accompanied her husband to Dublin during his time as Lord Lieutenant of Ireland from 1829 to 1830. In 1831, being a friend of King William IV, she was appointed governess of his niece and heir presumptive, Princess Victoria of Kent, who ascended the British throne in 1837. The role was mostly ceremonial, and Victoria continued to rely mostly on Baroness Louise Lehzen. The Duchess was dismissed in 1837 by the Princess's mother, the Duchess of Kent, for attempting to become more influential in the girl's education[2][3][4] and refusing to submit to the Duchess of Kent's comptroller, Sir John Conroy.[5] She had earlier opposed the harshness of the Kensington System, designed by Conroy and the Duchess of Kent, and wrote to Princess Feodora of Leiningen (the Duchess of Kent's daughter and Princess Victoria's elder half-sister) to ask her to tell the King to intervene.[6] Feodora and the Duchess of Northumberland were also determined to protect Baroness Lehzen from the hostility of Conroy and his friend, Lady Flora Hastings.[7] 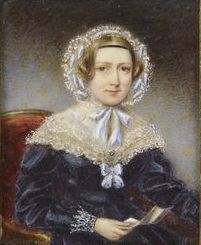 This 1839 portrait of the Duchess by Thomas Overton was bought by Queen Victoria in 1870.

The Duchess was born into a plant-loving family and was an avid plant enthusiast herself.[10][11] She was the first person in Great Britain to cultivate and bring to flower[12] Southern African plants belonging to the genus Clivia, named in her honour by the Kew botanist John Lindley in 1828.[13]