John Brown (8 December 1826 – 27 March 1883) was a Scottish personal attendant and favourite of Queen Victoria for many years after working as a gillie for Albert, Prince Consort.[1] He was appreciated by many (including the Queen) for his competence and companionship, and resented by others (most notably her son and heir apparent, the future Edward VII, the rest of the Queen's children, ministers, and the palace staff) for his influence and informal manner. The exact nature of his relationship with Victoria was the subject of great speculation by contemporaries.

Brown was born on 8 December 1826 at Crathienaird, Crathie and Braemar Aberdeenshire, to Margaret Leys and John Brown,[2][3] and went to work as an outdoor servant (in Scots ghillie or gillie) at Balmoral Castle, which Queen Victoria and Prince Albert leased in February 1848, and purchased outright in November 1851.

By 1851, Brown's role changed from being gillie and personal friend to Prince Albert[5] to a "permanent role" as the leader of the Queen's pony, "on Prince Albert's instigation".[6]

Prince Albert's untimely death in 1861 was a shock from which Queen Victoria never fully recovered. John Brown became a friend and supported the Queen. Victoria was known to give him many gifts as well as creating two medals for him, the Faithful Servant Medal and the Devoted Service Medal. She also commissioned a portrait of him in 1876, given to him on Albert's birthday, 26 August.[7]

Victoria's children and ministers were not as accepting of the high regard she had for Brown, and lies circulated that there was something improper in their relationship.[8] Victoria herself dismissed the chatter as "ill-natured gossip in the higher classes".[9] 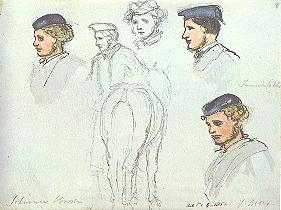 A young John Brown as sketched by Queen Victoria

The diaries of Lewis Harcourt contain a report that one of the Queen's chaplains, Rev. Norman Macleod, made a deathbed confession repenting his action in presiding over Queen Victoria's marriage to John Brown.[10] Debate continues over this report. Harcourt did not receive the confession directly (he was nine when Macleod died) but rather, it passed (if it did) from Macleod's sister to the wife of Henry Ponsonby, the Queen's private secretary, and thence to Harcourt's father Sir William Harcourt, then Home Secretary. Harcourt served as Home Secretary in the final three years of Brown's life.

A letter from Victoria to Viscount Cranbrook, written shortly after Brown's death but rediscovered in 2004, shows how she described the loss:[11]

"Perhaps never in history was there so strong and true an attachment, so warm and loving a friendship between the sovereign and servant ... Strength of character as well as power of frame – the most fearless uprightness, kindness, sense of justice, honesty, independence and unselfishness combined with a tender, warm heart ... made him one of the most remarkable men. The Queen feels that life for the second time is become most trying and sad to bear deprived of all she so needs ... the blow has fallen too heavily not to be very heavily felt..."[12] Queen Victoria on "Fyvie" with John Brown at Balmoral, by George Washington Wilson, 1863; medium: carte de visite, size: 9.20 × 6.10 cm; from the collection of the National Galleries of Scotland

The phrase "for the second time" relates to the death of Brown after the death of her husband Prince Albert. The historian who discovered the letter believed that it suggested that Victoria, in her mind, equated Brown's death with Albert's, and that she therefore viewed him as more than a servant, but also as a good friend and confidant.[11] There is, however, no evidence that Brown and Victoria were lovers.

John Brown died, aged 56, at Windsor Castle on 27 March 1883, and is buried in Crathie Kirkyard, in the next plot to his parents and a number of his siblings. The inscription on his gravestone further shows the attachment between him and the Queen:

"This stone is erected in affectionate and grateful remembrance of John Brown the devoted and faithful personal attendant and beloved friend of Queen Victoria in whose service he had been for 34 years.

That Friend on whose fidelity you count/that Friend given to you by circumstances/over which you have no control/was God’s own gift.

Well done good and faithful servant/Thou hast been faithful over a few things,/I will make thee ruler over many things/Enter thou into the joy of the Lord."[13][14]

Those who believe that the Queen saw Brown as little more than a servant point to the fact that after his death she became similarly attached to an Indian servant, Mohammed Abdul Karim, one of two who had come to work for her in late June 1887. She called him the Munshi, and he came to be resented even more than John Brown. Unlike Brown, whose loyalty was not questioned, there were unevidenced contemporary claims that Abdul Karim exploited his position for personal gain and prestige.[15]

Tony Rennell's book Last Days of Glory: The Death of Queen Victoria describes Victoria's detailed instructions about her burial to her doctor, Sir James Reid (Brown died in 1883: the Queen's wish was for him to attend to her). These included a list of the keepsakes and mementoes, photographs and trinkets to be placed in the coffin with her: along with Albert's dressing gown and a plaster cast of his hand, the Queen was buried with a lock of Brown's hair, his photograph, Brown's mother's wedding ring, given to her by Brown, along with several of his letters. The photograph, wrapped in white tissue paper, was placed in her left hand, with flowers arranged to hide it from view. She wore the ring on the third finger of her right hand.[16] Statue of John Brown in the grounds of Balmoral

The statues and private memorials that Victoria had created for Brown were destroyed at the order of her son, Edward VII, with whom Brown had often clashed and who resented Brown.

Queen Victoria commissioned a life-sized statue of Brown by Edgar Boehm shortly after his death. The inscription read: Friend more than Servant. Loyal. Truthful. Brave. Self less than Duty, even to the Grave. When Victoria's son succeeded to the throne he had the statue moved to a less conspicuous site.[17]: 23

Two days after being afflicted with erysipelas, which crippled him to the point of not being able to attend the queen for the first time in over eighteen years as her servant, John Brown died. "He was the best, truest heart that ever beat," Queen Victoria wrote to Brown's sister-in-law, Jessie McHardy Brown.[18] In a letter to the British poet Alfred Tennyson, to whom she commissioned lines for Brown's tombstone, Victoria eulogized her faithful servant:

He had no thought but for me, my welfare, my comfort, my safety, my happiness. Courageous, unselfish, totally disinterested, discreet to the highest degree, speaking the truth fearlessly and telling me what he thought and considered to be "just and right," without flattery and without saying what would be pleasing if he did not think it right. . . . The comfort of my daily life is gone—the void is terrible—the loss is irreparable![19]

Design and manufacture of both medals were commissioned by Queen Victoria.