This article does not cite any sources. Please help improve this article by adding citations to reliable sources. Unsourced material may be challenged and removed.Find sources: "Collar pin" – news · newspapers · books · scholar · JSTOR (October 2009) (Learn how and when to remove this template message) 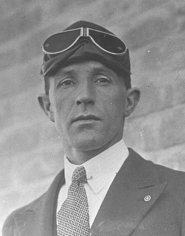 Norman Brearley, Australian aviation pioneer is shown in a photograph of the 1920s. The head and shoulders image show him wearing flying goggles, a day suit, tie and collar pin.

A collar pin (closely related to the collar bar and collar clip) is a piece of men's jewelry, which holds the two ends of a dress shirt collar together and passes underneath the knot of a necktie. Functioning in a similar way as a tabbed collar, it keeps the collar in place and lifts the knot to provide a more aesthetically pleasing arc to the necktie.

A collar pin is between three and five centimeters in length and is one of three kinds:

The latter two styles do not require specially made collars, but collar bars are generally not worn with buttoned-down ("polo") collars and would be redundant with tabbed collars. Collar stays are not needed when using a collar bar. As a general matter, collar pins work best with straight, minimally spread collars; least, if at all, with spread collars; and not at all with widely spread collars such as the cutaway.