Hey Dude is an American Western comedy series that aired on Nickelodeon from July 14, 1989 to August 30, 1991 consisting of 65 half-hour episodes produced over five seasons.

The series, aimed primarily towards a teenage audience, is set on the fictional "Bar None Dude Ranch" near the city of Tucson, Arizona. It portrays the lives of the ranch's owner, his son, a female ranch hand, and four teenage summer employees.

Ben Ernst, a divorced, good-natured, somewhat bumbling father from New Jersey, bought the Bar None Dude Ranch seeking escape from his high-pressure job as a New York City accountant. His son, Buddy, is displeased with the change of locale, primarily because he is unable to use his skateboard on the desert sand.

In Season 1 of the series, the teenage staff consisted of two boys and two girls: Ted, an enterprising troublemaker; Danny, an easy-going Hopi teenager and Ted's best friend; girl-next-door Melody; and Brad, a rich girl from Grosse Pointe, Michigan. Though Brad often wears dressy designer outfits at work, she is a competent horse rider. Her love-hate relationship with Ted is a plot thread during the first half of the series.

After David Lascher left the show during Season 3 in 1990, Ted was replaced by Ernst's nephew Jake, an eccentric slacker who likes to play the drums. Not long after, Kyle, a somewhat dim but handsome cowboy type, joined the ranch. When Ted returned to the show, he and Kyle became romantic rivals for Brad. The show's only other featured adult is Lucy, a tough, authoritative ranch hand. She is sometimes viewed as a mother figure to the teens and often ask her for advice.

Each episode begins with a cold open that usually ends with a pun. After that, the show's logo appears over the end of the cold open. Each character is then introduced as a horseshoe flips, followed again by the show's logo, after which the opening sequence fades out. Each episode ends with an instrumental version of the show's theme song while the credits roll over stills from the episode. 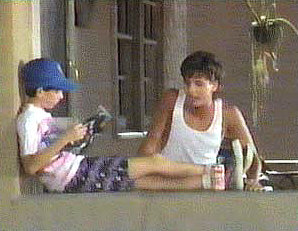 David Lascher and Joe Torres were nominated for a 1991 Young Artist Award in the Best Youth Variety or Game Show category for their roles on Hey Dude.[1]

Hey Dude was videotaped on location at the Tanque Verde Guest Ranch in Tucson, Arizona.[2] The show was produced by Cinetel Productions. Casting began in 1988 with local auditions held in Tucson.[2] Josh Tygiel, who was cast as protagonist Buddy Ernst, was one of 120 Tucson-area boys who auditioned for the series.[2] Joe Torres was cast as Danny Lightfoot after auditioning in Tucson for the role.[2]

While most of the show was technically shot on the property of the Tanque Verde Guest Ranch, the familiar "ranch" that was known to television viewers was actually built from scratch roughly a mile away from the main public areas. This was done so ranch guests would not be bothered by the production and to create buildings with a more "western" look, which was not offered by the relatively modern and luxurious Tanque Verde. The main lodge, boys and girls bunks, guest lodge (which doubled as cast dressing rooms) and the stable were all built specifically for the production.

The series ran for 65 30-minute episodes over two years from 1989 to 1991. Each season take place over the course of one summer in the lives of the ranch's staff, with cast members often recalling pranks and staff members from previous summers.

On April 11, 2011 it was announced that Shout! Factory had acquired the rights to the series. They subsequently released the entire series on DVD in Region 1.[4][5][6][7] The fourth season was released on DVD as a Shout Select title, available exclusively through Shout Factory's website and select Amazon.com sellers.[8] The fifth and final season was released on July 16, 2013, also as a Shout Select title.[9]

On March 10, 2015, Shout! released Hey Dude: The Complete Series on DVD as a Walmart exclusive in full screen format.[10] It is also available through Amazon.com.[11]