Postcode area within the United Kingdom
This article possibly contains original research. Please improve it by verifying the claims made and adding inline citations. Statements consisting only of original research should be removed. (May 2022) (Learn how and when to remove this template message)

The IG postcode area, also known as the Ilford postcode area,[2] is a group of eleven postcode districts in England, within six post towns. These cover parts of eastern Greater London and south-west Essex. Inward mail for the area is sorted, along with mail for the E and RM postcode areas, at the Romford Mail Centre.

The area uses "IG" rather than "IL", as the latter could be misread as "LL" or "L1". The "G" is derived from final letter of the adjacent postal town Barking, a feature shared with the SM postcode area, where the chosen letters also appear to combine the names of two neighbouring places.

In 2005, a local businessman named Wilson Chowdhry led a campaign for Ilford's IG1 postcode to be changed to E19. Although Ilford has been part of Greater London since 1965, it is not within the London post town. Chowdhry argued that the IG1 postcode confused customers, and that a London E postcode would help bring more business into Ilford. However, a Royal Mail spokesman said that the campaign had "virtually no hope" of succeeding, as postcodes are only changed for operational reasons.[4]

A similar plea had been raised in the 1970s by Greater London Council politician Serge Lourie, and similarly rejected. Ilford had been part of the original E division of the London postal district from 1857 until 1866.[5] 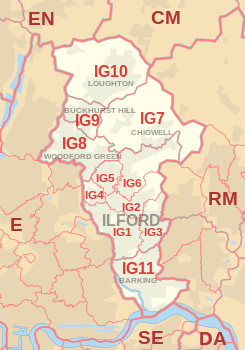