The PA postcode area, also known as the Paisley postcode area,[2] is a group of 67 postcode districts in western Scotland, within 35 post towns. These cover Renfrewshire (including Paisley, Renfrew, Johnstone, Bishopton, Erskine, Bridge of Weir and Lochwinnoch), Inverclyde (including Greenock, Port Glasgow, Gourock, Kilmacolm and Wemyss Bay) and most of Argyll and Bute (including Oban, Lochgilphead, Tarbert, Campbeltown, Appin, Taynuilt, Bridge of Orchy, Dalmally, Inveraray, Cairndow, Colintraive, Dunoon, Tighnabruaich, and the Isles of Mull, Iona, Coll, Tiree, Jura, Colonsay, Islay, Gigha and Bute), plus small parts of North Ayrshire (including Skelmorlie) and Highland.

Ballachulish and Kinlochleven were originally coded PA39 and PA40 respectively, before being transferred to the PH area in 1999 as PH49 and PH50.[3] The PA80 district was formed out of the PA34 district in 2011 following a campaign by residents of Morvern.[4][5] 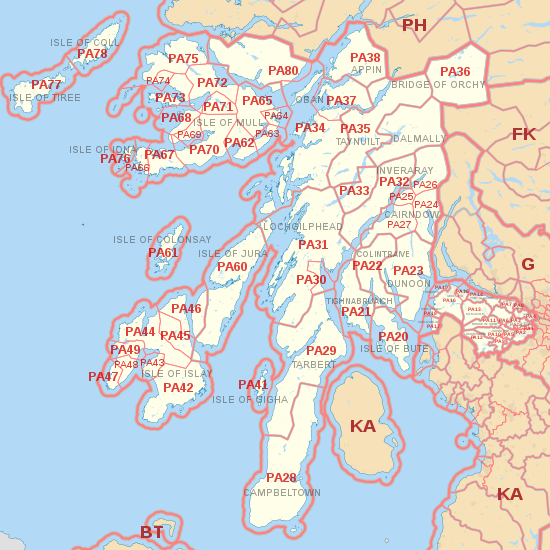