The EC (Eastern Central) postcode area, also known as the London EC postal area,[2] is a group of postcode districts in central London, England. It includes almost all of the City of London and parts of the London Boroughs of Islington, Camden, Hackney, Tower Hamlets and Westminster. The area covered is of very high density development. Deliveries for the EC postcode area are made from Mount Pleasant Mail Centre.

The current postcode districts are relatively recent divisions of EC1, EC2, EC3 and EC4, which were established in 1917. When the districts are used for purposes other than the sorting of mail, such as a geographic, spoken reference and on street signs, they continue to be commonly grouped into those four 'districts'.

The EC1 postcode district (51°31′23″N 0°05′31″W﻿ / ﻿51.523°N 0.092°W﻿ / 51.523; -0.092﻿ (EC1)) is roughly bounded by City Road to the northeast and east, Moorgate Street to the east, Chiswell Street and Newgate Street to the south, Rosebery Avenue to the northwest, and Gray's Inn Road to the west, where it borders WC postcode area. A long thin protrusion to the north east takes in all of Old Street. Taking in the districts of Clerkenwell, Finsbury and the northwestern corner of the City of London from St Paul's Cathedral.[3]

The EC3 postcode district (51°30′29″N 0°04′34″W﻿ / ﻿51.508°N 0.076°W﻿ / 51.508; -0.076﻿ (EC3)) is roughly bounded by Minories and the Tower of London to the east, the River Thames to the south, London Bridge and Threadneedle Street to the west and Houndsditch to the north. It includes the Monument, Aldgate, Cornhill, Fenchurch Street, Gracechurch Street, Leadenhall Street, Lombard Street, Mincing Lane, Pudding Lane and Tower Hill and roughly covers the southeastern corner of the City of London. A small part is in the London Borough of Tower Hamlets, including the Tower of London.[5] 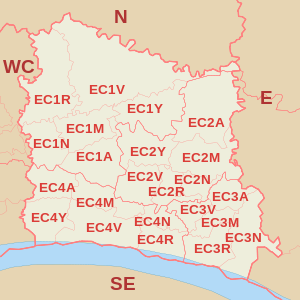