The SL postcode area, also known as the Slough postcode area,[2] is a group of ten postcode districts in South East England, within eight post towns. These cover east Berkshire (including Slough, Maidenhead, Windsor and Ascot) and south Buckinghamshire (including Iver, Gerrards Cross, Marlow and Bourne End), plus a very small part of south-west Hertfordshire.

Mail for this area is sorted in Greenford (Green Park Way).

In 2008, a group of residents in the Royal Borough of Windsor and Maidenhead campaigned to have Windsor and Maidenhead's SL postcodes replaced with WM postcodes, claiming the association with Slough affected the towns' statuses as "desirable places to live". Royal Mail later stated that the campaign would be unlikely to succeed.[3] 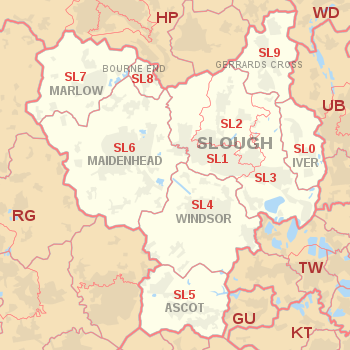