The N (Northern) postcode area, also known as the London N postcode area,[2] is the part of the London post town covering part of North London, England. It is a group of 25 postcode districts which covers around 17,429 live postcodes.

The area covers parts of the London Boroughs of Hackney, Islington, Camden, Barnet, Haringey and Enfield.

The postcode area originated in 1857 as the N district of London. In 1917 it was subdivided into 22 numbered districts.[3] The Northern head district was designated as N1 and the rest of the numbering followed the alphabetical order of the other districts' main names. Most districts include local areas known by their own specific names (see table below). The official post town for all N postcodes is LONDON; district names do not form an essential part of postal addresses.[2]

In 2010, a new N1C district was formed out of the far western part of the original N1 district, to accommodate redevelopment in Kings Cross Central.[4][5] The N area also includes two non-geographic postcode districts: N1P for PO boxes in N1 or N1C; and N81 for ballot mailings to Electoral Reform Services in N8.[6]

The approximate coverage of the postcode districts,[original research?] with the historic postal district names[7] shown in italics: 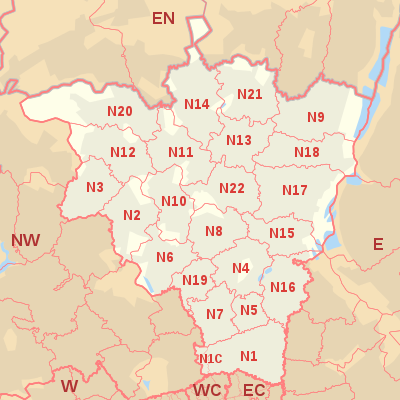