Masahiro "Masa" Chono (蝶野正洋, Chōno Masahiro, born September 17, 1963) is an American-born Japanese-American retired professional wrestler and actor best known for his 26 year stint with New Japan Pro-Wrestling (NJPW). As the leader of nWo Japan, Team 2000 and Black New Japan, he was the promotion's top heel for much of his career, beginning in 1994 when he adopted his Yakuza inspired gimmick.

Aside from his work in NJPW, Chono has also made appearances for World Championship Wrestling (WCW), as a member of the New World Order, as well as occasional appearances in All Japan Pro Wrestling (AJPW), Pro Wrestling Noah and Pro Wrestling Zero1. Chono holds the record for most wins of the G1 Climax at 5, which has earned him the nicknames "Mr. August" and "Mr. G1". Overall, he is a two-time world champion, with one reign as IWGP Heavyweight Champion and NWA Worlds Heavyweight Champion each. He is also a seven-time IWGP Tag Team Champion.

Chōno debuted in 1984 against Keiji Mutoh at a New Japan Pro-Wrestling (NJPW) event in Saitama, Japan.[6] In 1987, he defeated Shinya Hashimoto to win the Young Lions Cup. After winning the tournament, he went on an excursion that started in Europe, wrestling for Otto Wanz's Catch Wrestling Association.

After a while in Europe, Chono went on an excursion to North America, starting in the United States for Central States Wrestling in Kansas City, which by then broke away from the National Wrestling Alliance to form the World Wrestling Alliance.[6] He would also later wrestle in the Canadian Maritimes for Atlantic Grand Prix Wrestling and in Puerto Rico, where he, Hashimoto, and Mutoh formed The Three Musketeers.

Chono returned to NJPW part-time in July 1988. He came back to the United States in October 1988 and teamed with Mike Davis in Continental Championship Wrestling (CCW), by then renamed the Continental Wrestling Federation (CWF), and won that company's tag titles as the Japanese Connection.

In April 1989, he took part in the IWGP Heavyweight Championship tournament, held at New Japan's very first show at the Tokyo Dome; he lost to eventual winner of the tournament and new champion Big Van Vader in the quarterfinals. During this time, he would return to the United States and have a brief run in Australia.

Upon Chono's return to New Japan in October 1989, on February 10, 1990, he wrestled in the main-event of NJPW's second Tokyo Dome show, teaming with Shinya Hashimoto against Antonio Inoki and Seiji Sakaguchi, on April 27 he won the IWGP Tag Team Championship with Mutoh, and on December 26 he defeated his mentor, wrestling legend Lou Thesz, when Thesz came out of retirement for one last match.[6] The next year, Chono solidified his main-event status with an amazing performance in the first G1 Climax tournament, winning the tournament in a thirty-minute final over Mutoh.[6]

A short time after winning his third G1 Climax, Chono underwent a change in attitude. Originally a clean-cut fan favorite during his NWA World title reign, he turned heel, angered that Power Warrior received a shot at the IWGP Heavyweight Championship before him, as he won the tournament. He also changed his image and adopted a yakuza gimmick, complete with sunglasses, menacing mannerisms and black coats and tights. Chono's partnering with Hiroyoshi Tenzan and Hiro Saito as "Team Wolf" provided a foundation to NJPW's nWo Japan. Establishing himself as leader of its Japanese sister stable, Chono joined the American nWo in December 1996 as it was gaining momentum in World Championship Wrestling (WCW). He would also join its successor, Team 2000, which would eventually restructure again. In a match against WCW's Bill Goldberg, Chono supposedly "shot" the match (actually employing legitimate combat) and dislocated his shoulder.

Upon returning to Japan, Chono rejoined NJPW, where he achieved much success. He won the IWGP Tag Team Titles on six occasions and also won the very prestigious IWGP Heavyweight Title in 1998. In 2002, Chono won his fourth G1 Climax tournament and had a brief, memorable feud with WWE's Chyna. He also became a booker for NJPW around this time.[6] In 2003, Chono briefly joined Pro Wrestling NOAH for a handful of matches and was defeated by GHC Champion Kenta Kobashi on 2 May of that year. On October 13, he lost to Hulk Hogan.

In early 2004, Chono became the leader of the Black New Japan stable, which was the most dominating heel stable in NJPW until it was disbanded by Riki Choshu. As a reaction to this, Chono lead an "Anti-Choshu Army" with Hiroyoshi Tenzan and Black Strong Machine. Chono won the 2005 G1 Climax tournament, thus having achieved a record-setting five G1 victories. His success in the G1 has given him the nickname Mr. August.

On October 30, 2005, Masahiro Chono and Tenzan defeated the team of Shinsuke Nakamura and Hiroshi Tanahashi to win their fifth IWGP Tag Team Championship. The team went on to rename themselves Cho-Ten, a portmanteau of the members' names. They were stripped of the titles in late 2006 after they split up, and refused to defend them together. Masahiro Chono formed a stable with Shinsuke Nakamura in 2006 called Chono and Nakamura-gun, which began feuding with Tenzan's new group, GBH. Chono continued to wrestle full-time in 2007, but also began working as a promoter, with New Japan permitting him to set up cards in different areas of Japan. Following the 2007 G1 Climax, it appears that Chono may be breaking away from his BLACK faction and formed the Legend stable, having sworn in wrestlers such as Riki Choshu, Jyushin Thunder Liger, Shiro Koshinaka, and AKIRA.

Outside wrestling, Chono began appearing on Gaki no Tsukai's "No Laughing Batsu Game" as one of the attackers, usually giving Hōsei Tsukitei a slap to the face.

In January 2010 it was reported that Chono would be leaving New Japan and becoming a freelancer, after spending most of his career with the company.[7]

In March 2010, Chono portrayed Nobunaga Oda in two matches during a Samurai Festival after leaving New Japan. Chono wrestled AKIRA, who portrayed Mitsuhide Akechi, on both days, winning the first match and losing the second. On August 15, 2010, Chono returned to New Japan to serve as the special ring announcer for the G1 Climax final match between Hiroshi Tanahashi and Satoshi Kojima.[8] On November 5 and 6, Chono appeared in a series of shows in Taiwan for All Japan. On November 5, Chono and Mutoh defeated the Voodoo Murders (TARU and Rene Dupree). The following day, Chono teamed with Mutoh and Masakatsu Funaki to defeat the Voodoo Murders (Dupree, KENSO, and Joe Doering).[9] In December 2010, Chono began working for Antonio Inoki's Inoki Genome Federation as a booker.

On March 6, 2011, Chono entered Pro Wrestling ZERO1 for their 10th Anniversary Show, where he defeated Daichi Hashimoto in his debut match.[10] On April 17, 2011, Chono wrestled for Osaka Pro, where he teamed with Kuuga and Orochi in a losing effort against Shodai Tiger Mask, Billyken Kid, and Tsubasa.[11] On August 14, 2011, Chono returned to Osaka Pro, teaming with TAJIRI and Zeus in a victory over JOKER (Kuuga, Orochi, and Tadasuke).[12] On October 3, 2011, Chono returned to NJPW for a Team Wolf reunion match, teaming with Hiroyoshi Tenzan and Hiro Saito to defeat Osamu Nishimura, Koji Kanemoto, and Shinjiro Otani.[13]

In January 2013, Chono signed with All Japan Pro Wrestling (AJPW) as an advisor.

Since leaving AJPW, Chono has become a freelancer. His last match on record was on April 13, 2014, for Dotonbori Pro Wrestling, teaming with Daisuke Masaoka and Hayata in a loss to Super Delfin, HUB, and Gran Hamada.

In late-June 1995, Chono's father died. His death forced Chono to miss an IWGP Tag Team title defense and take a hiatus, which forced him and Hiroyoshi Tenzan to vacate the title on July 7, 1995.[citation needed]

Chono appears as a gang member in the 2017 video game Yakuza Kiwami 2, alongside Genichiro Tenryu, Keiji Mutoh, Riki Choshu and Tatsumi Fujinami.[14] Besides appearing in numerous TV shows, he was the voice actor in the Japanese dubbed version of Blade: Trinity for Jarko Grimwood,[citation needed] 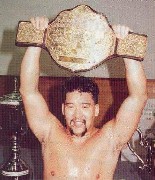 Chono as the NWA World Heavyweight Champion in 1992