Match is a fictional character in the DC Comics Universe. He is a clone of Superboy. Match appeared in the Superboy title, issues of Young Justice and the Sins of Youth and Joker's Last Laugh crossover events. Currently, he is a member of the Suicide Squad. 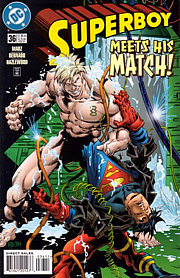 Cover to Superboy (vol. 4) #36 by Ramon Bernado. Match's original appearance, including his blond hairstyle, which later changed to resemble Bizarro.

Created using Superboy's DNA, Match was made to serve "the Agenda"[1] a secret organization specializing in creating clone armies. Agent Amanda Spence was able to kidnap Superboy and the Agenda used his DNA to create the clone Match. Match was given implanted memories, like Superboy, but they included a greater host of information that Superboy did not have. He also had improved durability as well as greater control over his powers. In fact, it is believed by some[2] that the host of data he was given helped him hone his powers.

In the resulting battle between the two clones, Superboy managed to come out on top and the reactor holding the Agenda's compound together exploded, destroying the base. Match was left alone and ailing.[3]

During Joker's Last Laugh, after being poisoned with Joker venom, Match returned to infiltrate and terrorize Young Justice disguised to look like Superboy. While Superboy was away, Match was at Young Justice headquarters with Empress, Secret, Arrowette, and Wonder Girl in the hopes of killing them in a comical manner. While the Jokerized Match was unable to keep his plans secret from the girls, they simply believed he was Superboy pretending to be a Jokerized Match to try to lighten the mood after Robin and Impulse both quit earlier that day. Match left however after accidentally making Wonder Girl confess her love for Superboy, causing Match to develop feelings for her as well.[5]

The criminal mercenary Deathstroke begun forming Titans East, a team created explicitly to take down the Teen Titans. Though he was a powerful physical asset to the team, Match's presence was more of a psychological ploy, due to Superboy's death during the Infinite Crisis event. Deathstroke counted on Match's resemblance to Superboy, enhanced by changing his costume to match Superboy's last costume, to unbalance Robin, Superboy's best friend and the Titans' leader, and Wonder Girl, Superboy's girlfriend and one of the Titans' most powerful members.

Match's first appearance in Teen Titans #43 shows that both his mind and body have begun to rot away, making him behave more like a normal Bizarro clone, even going so far as to speak in contradictions. He appears to still have feelings for Wonder Girl, as he claims "I hate Wonder Girl". Following that, in Teen Titans #44, Wonder Girl wakes up in what seems to be a replica of the Fortress of Solitude in Slade's Titans Tower in New York. She sees what appears to be Superboy on a throne, but it is, in fact, Match, who claims "You so ugly when you sleep, me hate to watch you", continuing to speak in opposite logic as his body and mind deteriorate.

As he attempts to force his feelings on Wonder Girl, Match is unexpectedly attacked by Robin and Batgirl (who was freed from Slade's influence). His body appears less invulnerable than before, as Robin's throwing R's managed to cut into the clone's back. Wonder Girl, still furious at Match's very existence began an all out assault against the clone, only to still end up defeated along with her other teammates by Match and the other Titans East. When Nightwing, Donna Troy, Flash (Bart Allen) and Beast Boy arrive with Cyborg, Raven and Duela Dent, the unified Titans battle against the Titans East one last time. Match is defeated when Wonder Girl reflects his heat-vision back at him with her bracelets after which Jericho possesses his unconscious body.

But due to Match's Kryptonian powers, he was proven too dangerous to turn over to conventional authorities. As such, Jericho continued to control Match's body, which proved difficult for him after a point. At one point Match managed to break free of Jericho's control and began destroying Titans Tower. Wonder Girl however manages to soothe him long enough for him to become submissive to Jericho's control again.

Later Jericho, still trapped in Match's body, seemingly escapes from S.T.A.R. Labs in visible distress and asking for his friends' help.[6] The Titans attempt to separate the two, only for Match to break free, with Jericho screaming in panic that he can not control him. When the two are finally separated, however, it is revealed that it was Match who was panicked, and that Jericho, whose mind had been corrupted by the time spent trapped inside Match, was in control of their shared body.[7]

Match is later tracked down and killed by Superboy-Prime, who then turns his body over to the rogue scientist Doctor Calligan. Calligan dissects Match's body and uses it to reverse engineer three clones of Superboy that resemble the hero when he first appeared, during his time with Young Justice, and during the brief period when he was brainwashed by Lex Luthor, respectively.[8] During the ensuing battle, Robin and Ravager destroy all three clones by using a Kryptonite blade.[9]

Following the events of Dark Nights: Death Metal, Match returned to mainstream continuity as a member of the Suicide Squad. Believing that he was the real Superboy, he eventually encountered Kon-El and fought with him. Afterwards, Match's squad mate Nocturna would show them Agenda's underground lab showing dozens of Superboy clones.

Originally, Match's physical appearance was practically identical to Superboy's, except for white hair and pale eyes (in comparison to Superboy's black hair and blue eyes) and a "brand" of the Agenda's logo on the left side of his chest. This logo was also on his original costume, two intertwined double helixes (most likely to represent DNA) that form a shape akin to three circles. Match's look is currently very similar to a Bizarro clone of Superboy. Like Superboy after his redesign, Match has jeans and black T-shirt. However, the shirt has several tears or holes and the "S" shield is reversed, like Bizarro's. His body exhibits extreme skin calcification, a trait he shares with Bizarro. Due to genetic damage which accumulated over time, his mental and speech patterns currently resemble those of a Bizarro.

Match has exhibited powers similar to Superboy, but supposedly had greater control. These powers include tactile telekinesis which can mimic Superman's powers of flight and super-strength, but can also be used to disassemble machinery. Occasionally, he has also displayed the ability to create blasts of energy from his eyes.[5] Like how Superboy eventually began to develop real Kryptonian powers from exposure to Earth's yellow sun, Match began to develop Kryptonian powers including heat vision, super-breath, x-ray vision, and super-hearing. He also developed Kryptonian invulnerability and strength.

It appears that Match's cloned body and mind are slowly rotting away over time, leaving the full extent of his current powers questionable. His body appears to be less shielded or invulnerable, as Robin and Batgirl managed to cause him pain by striking him with Robin's throwing R's.[10]

A child version of Match appears in Tiny Titans #25, along with Superboy. It is revealed that he has "magic words", which causes him to attack to get the object which has been mentioned. This includes "puppy" (causing him to chase Krypto) and "bubblegum" causing him to jump on Speedy and take a stick of the said gum from him.[11]

Match appears in the Young Justice episode "Agendas", voiced by Nolan North. Rather than being a clone of Superboy, Match is introduced as the first clone of Superman created by Cadmus Labs from a pure sample of Kryptonian DNA (unlike Superboy, who is made from DNA from both Superman and Lex Luthor). Match possesses the full range of Kryptonian powers and is almost identical to Superboy, with the exception of eyes with black sclera. He carved a backwards S-shield into his chest with his heat vision, resembling the number 2. He has been conditioned to respond violently to the sight of the Superman logo. Match gets his name from Luthor who wanted Superman to "meet his match" (as well as the experiment named "Project Match"). Due to the difficulties involved in replicating Kryptonian DNA, Match turned out to be mentally (and possibly physically) unstable and was placed in cryogenic storage. Match goes on a rampage after being freed by Superboy and is returned to cryogenic storage after being recaptured. In "Auld Acquaintance", the cryogenic pod used to hold Match was among the items stolen by Lex Luthor, Ra's al Ghul, Queen Bee, Ocean Master, and Brain after they had infiltrated Project Cadmus.

Match appears in the 22nd issue of the Young Justice tie-in comic. In 2015, Match re-appears as a much-more deformed individual where he had gotten paler, his left leg and the left side of his face had swollen, and his right arm had become oversized. He fights Batgirl until she got the better of him using a foam and smoke pellet. Match was later taken away by a LexCorp van.[12]