Disclosure of tax haven client data in 2013
This article may be expanded with text translated from the corresponding article in German. (April 2013) Click [show] for important translation instructions. View a machine-translated version of the German article. Machine translation like DeepL or Google Translate is a useful starting point for translations, but translators must revise errors as necessary and confirm that the translation is accurate, rather than simply copy-pasting machine-translated text into the English Wikipedia. Consider adding a topic to this template: there are already 8,558 articles in the main category, and specifying|topic= will aid in categorization. Do not translate text that appears unreliable or low-quality. If possible, verify the text with references provided in the foreign-language article. You must provide copyright attribution in the edit summary accompanying your translation by providing an interlanguage link to the source of your translation. A model attribution edit summary is Content in this edit is translated from the existing German Wikipedia article at [[:de:Offshore-Leaks]]; see its history for attribution. You should also add the template ((Translated|de|Offshore-Leaks)) to the talk page. For more guidance, see Wikipedia:Translation. 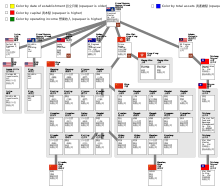 Group structure and statistics of “Gourmet Master Co. Ltd.”, as of 31 December 2017, with hyperlinks to the ICIJ Offshore Leaks Database.
Cf. usage instructions for this interactive SVG at the file's description page on Wikimedia Commons.

Offshore Leaks is a report disclosing details of 130,000 offshore accounts in April 2013. Some observers have called it the biggest hit against international tax fraud of all times (to date), although it has been pointed out that normal businesses may use the offshore legislation to ease formalities in international trade.[1][2]

The report originated from the Washington D.C.-based investigative journalism nonprofit, the International Consortium of Investigative Journalists (ICIJ), who collaborated with reporters around the world to produce the series of investigative reports published in connection with ICIJ's The Global Muckraker.[3] The investigation is based on a cache of 2.5 million secret records about the offshore assets of people from 170 countries and territories, obtained by ICIJ's director, Gerard Ryle.[2]

The ICIJ Offshore Leaks Database is headed with the cautionary paragraph: "There are legitimate uses for offshore companies and trusts. We do not intend to suggest or imply that any persons, companies or other entities included in the ICIJ Offshore Leaks Database have broken the law or otherwise acted improperly." More than 100 journalists from more than 60 countries and dozens of news organizations have taken part in the investigation, which has since expanded to include revelations about the offshore holdings of China's business and political elites.

Imee Marcos, daughter of the former Philippine president Ferdinand Edralin Marcos, is on the list. Philippine authorities are investigating if the money is part of the 5 billion dollars with which Marcos fled from the country in the 1980s.[2] Also on the list are the family of Azerbaijani President Ilham Aliyev, former Prime Minister of Georgia Bidzina Ivanishvili, Olga Shuvalov (the wife of former Russian First Vice Premier Igor Shuvalov), Deputy Director of the Board of Gazprom Valeriy Golubev, and Ukrainian oligarchs Rinat Akhmetov and Dmytro Firtash.[4]

Kazi Zafarullah, a relative of Bangladesh's Prime Minister Sheikh Hasina, and his wife are shareholders of two offshore companies in the British Virgin Islands.[5]

A German politician, Peer Steinbrück, has called for harsh penalties for the banks involved in the scandal, up to the revoking of banking licenses.[6] ICIJ reports that the series of stories has sparked "official investigations, sweeping policy changes and high-profile resignations" around the world, with the European Union's top tax official calling Offshore Leaks “the most significant trigger” behind Europe's new push to crack down on offshore hideaways and global tax dodging.[7] “We're in a completely different context today” because of the Offshore Leaks revelations, Belgium's secretary of state has said. “It’s a new world.”[7]

IBC consultant Ryan Mohanlal responded that each enterprise, holding, corporation or entity which is registered has its own reasons for doing so and that there are legitimate reasons to incorporate in this form.[citation needed]

In Brazil, ICIJ's criteria for selecting journalists has been criticized for lack of transparency. The journalists chosen by ICIJ are part of media conglomerates that could potentially have connections with offshore account owners. Claims that UOL (a joint venture between Grupo Abril and Folha de S. Paulo) and O Globo (from military dictatorship backers Grupo Globo) journalists might pick and disclose names according to political bias rather than public interest eventually led investigative reporter Amaury Ribeiro Jr. to leave the ICIJ.[8]

As of 15 June 2013 a searchable database which includes part of the data is available under the URL http://offshoreleaks.icij.org/. So far the full primary data set has not been made publicly available.

There is no known connection between the ICIJ "Offshore Leaks" and "WikiLeaks".

By July 2021, the Government of India identified undeclared assets worth of about ₹11,010 crore (US$1.4 billion) following the investigation.[9]