Spade money (traditional Chinese: 布幣; simplified Chinese: 布币; pinyin: bù bì) was an early form of coin and commodity money used during the Zhou dynasty of China (1045 to 256 BC). Spade money was shaped like a spade or weeding tool, but the thin blade and small sizes of spade money indicate that it had no utilitarian function.[1] The earlier versions of spade coins tended to have a fragile, hollow socket, reminiscent of a metal shovel.[1] Later versions of spade money had this socket was transformed into a thin, flat piece, and over time, inscriptions were added to the spade coins to mark their denominations.[1] Several versions of spade money circulated across the Chinese Central Plains during the Zhou dynasty period until they were abolished by the Qin dynasty in 221 BC in favour of the Ban Liang cash coins.[1]

In 2021 a paper was published about an old mint that was discovered at an archeological site in Henan Province, through radiocarbon-dating the spade money found there was attributed to have been created between 640 BCE and no later than 550 BCE making it possibly the world's oldest known mint.[3] Meaning that it is possible that the earliest known coinage was invented by the Chinese and not the Lydians as is commonly believed.[3][4] Though the spade coins that were found at the Guanzhuang site are not as old as the metal coins that were discovered in the ancient city of Ephesus.[4]

Hollow-handled spades (Chinese: 布幣; pinyin: bùbì) are a link between weeding tools used for barter and stylised objects used as money. Although flimsy, they retain the hollow socket where a handle would be attached for use as a genuine tool. This socket is rectangular in its cross-section and still retains the clay from the casting process. In the socket, the hole that fixes the tool to its handle is also reproduced.

The inscriptions on these coins usually consist of one character, usually either a number, a cyclical character, a place name, or the name of a clan. The crude writing is that of the artisans who made the coins, not the more careful script of the scholars who wrote the votive inscriptions on bronze. The style of writing is consistent with that of the middle Zhou period. Over two hundred inscriptions are known, many of which have not been fully deciphered. The characters can be found on the left or right of the central line and may be inverted or retrograde. The alloy of these coins is typically 80% copper, 15% lead, and 5% tin. They are found in hoards of hundreds rather than thousands, sometimes tied together in bundles. Although there is no mention in the literature of their purchasing power, it is clear that they were not small change.[6][self-published source]

Flat-handled spade money does not have the hollow handle of the early spades. Nearly all have distinct legs, suggesting that their pattern was influenced by the pointed shoulder hollow-handled spades with further styling for easy handling. They are generally smaller and sometimes have denominations specified in their inscriptions in addition to place names. In combination with the little evidence of establishment dates of some mint towns, flat-handled spade money could have been a later development. Archaeological evidence dates them to the Warring States period (475 to 221 BC). Arched foot spades have an alloy consisting of about 80% copper; for other types the copper content varies between 40% and 70%.[9] 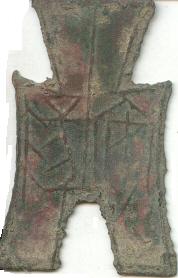 Square Foot Spade of An Yang

The mystique and rarity which surrounds the "three hole spade" money (三孔布) is such that many Chinese coin collectors have dubbed it to be "the king of ancient coins".[17] Three hole spades are often unique, with many variants of them being one-of-a-kind with some varieties being only known as fragments.[18] While catalogues of ancient Chinese coinages have existed for over nine centuries, the existence of three hole spades has only been known to modern people for around two centuries because of their rarity.[17] Most known examples of three hole spade money are in the hands of private collectors who reside outside of mainland China.[18]

The attribution of three hole spades remains unclear.[18] Three hole spades are believed to have circulated as a form of currency in what is now eastern Shanxi and Hebei sometime during the end of the Warring States period.[18] Scholars are divided over the attribution and they have attributed it to Zhao, Zhongshan, and Qin.[18] Based on archaeological finds and digs in the modern era as well as the placenames of the cities which have been identified from the obverse inscriptions on various three hole spades, the strongest evidence points towards the hypothesis that they were produced by Zhao.[18] While the fact that they use the Zhu and tael denominations are used as arguments that they might have been produced by Qin.[18]

The first modern documented three hole spade occurred around two centuries ago during the Manchu Qing dynasty period when it was acquired by artist and epigrapher Zhang Tingji (張廷濟, 1768–1848).[18] The seal script characters that appear on the obverse inscription of this three hole spade are Xia Qu Yang (下邲陽, xià qu yáng).[18] The city of Xiaquyang is believed to have been located in present-day Ningjin County, Hebei.[18] The reverse inscription of this three hole spade is believed to be 17 tael (十七兩, shí qī liǎng).[18] This specimen has a length of 7.35 centimeters, a width of 3.7 centimeters, and weighs 13.4 grams.[18]

Based on specimens that have appeared in coin catalogues dating back to the Qing Dynasty period, currently it is believed to be that there are more than 10 different city names that were used as obverse inscriptions for three hole spades and that there may be more than 30 varieties of the three hole spade in existence.[18] Modern Chinese numismatists and scholars are puzzled as to why an ancient state would manufacture so many different varieties of a coin in such small quantities.[18]

In the year 1974, a farmer in Fugou County, Henan, had unearthed a bronze three-legged tripod (鼎, dǐng).[19][20] Stashed inside this bronze tripod were eighteen specimens of spade money.[19][20] 1 of these spades was a hollow-handled spade (空首幣), while all the remaining 17 spade money were flat-handled spades (平首幣).[19][20] All of these unearthed spades are notably made of silver and are now on display at the Henan Museum.[19][20]

Two spade coins and a dozen moulds were discovered at the Guanzhuang Mint, these were attributed to have been produced between 640 BCE and no later than 550 BCE, which according to Hao Zhao, an archaeologist at Zhengzhou University, in an article phnlished in Antiquity makes it the world's oldest known mint.[21][1]

The walled and moated city of Guanzhuang itself (in present-day Henan Province) was established around 800 BCE, and its foundry, where bronze was cast and beaten into ritual vessels, weapons, and tools, opened around the year 770 BCE.[21][1] Excavations occurred between the years 2015 and 2019.[22] Hao Zhao claimed that it wasn’t for another 150 years that workers at the Guanzhuang foundry would also begin to mint spade coins outside the inner city's southern gate.[21][1] Zhao stated that while other research has dated coins from the Kingdom of Lydia (a historical country in present-day Turkey) to have been created as early as 630 BCE, he notes that the earliest mint known to have produced Lydian coins dates to sometime between 575 BCE and 550 BCE, which (if true) makes the Guanzhang Mint the world's oldest known mint.[21][1] Meanwhile the proposed date of 650–500 BCE (based on ceramic typology) for the minting remains from the foundries at the Xintian and Xinzheng sites remains conjectural and has never been confirmed by radiocarbon-dating, but the radiocarbon-dating for the Guanzhuang Mint was more conclusive strengthening the hypothesis that the Chinese invented money rather than the Lydians.[1]

The minting techniques that were employed at the Guanzhuang Mint are characterised by a number of things which indicate that the production of spade money wasn't a small-scale, sporadic experiment, but rather a well-planned and organised process such as batch production and standardisation, and quality control.[1]

Bill Maurer, a professor of anthropology at the University of California Irvine and director of the Institute for Money, Technology and Financial Inclusion, noted that the completeness of the find gives weight to the assertions made in Antiquity.[21] Mauer stated that usually coins tend to be found “bundled together and completely lacking any of the original context of their production or their use,” while in this case the entire mint as well as used casts were found.[21] Mauer further noted that an entire foundry, which is full of carbon residue associated with the production of the item itself, was discovered lending more weight to the accuracy of the radiocarbon-dating proving the authenticity of the assertions made by the Zhao and other researchers.[21]

Maurer further told National Geographic that the apparent level of standardisation of coin minting at the site "lends weight to the hypothesis that anthropologists and archaeologists have long held: that money emerges primarily as a political technology, not an economic technology." as they were found at a site of high political importance.[21][4]

George Selgin, director of the Center for Monetary and Financial Alternatives at the Cato Institute, says while he notes that it is an impressive find, "It doesn't change our basic understanding of when the first coins were produced. And it doesn’t necessarily mean that China did it first." saying that the find doesn't necessarily prove that the Chinese invented money before the Lydians did.[21]