CCIR System B (originally known as the "Gerber Standard"[1][2][3][4]) was the 625-line VHF analog broadcast television system which at its peak was the system used in most countries. It's usually associated with CCIR System G for UHF broadcasts.

It is mostly replaced across Western Europe, part of Asia and Africa by digital broadcasting.

The system was developed for VHF (also known as VHF-3) band (part of RF band lower than 300 MHz.) Some of the most important specs are listed below.[5] 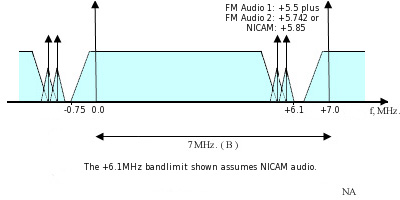 Channel spacing for CCIR television System B (VHF Bands)
The separation between the aural and visual carriers is 5.5 MHz.

The video bandwidth is 5.0 MHz. The video signal modulates the carrier by amplitude modulation. But a portion of the lower side band is suppressed. This technique is known as vestigial side band modulation (AC3). The polarity of modulation is negative, meaning that an increase in the instantaneous brightness of the video signal results in a decrease in RF power and vice versa. Specifically, the sync pulses (being "blacker than black") result in maximum power from the transmitter.

The separation between the primary audio FM subcarrier and the video carrier is 5.5 MHz.

The total RF bandwidth of System B (as originally designed with its single FM audio subcarrier) was 6.5 MHz, allowing System B to be transmitted in the 7.0 MHz wide channels specified for television in the VHF bands with an ample 500 kHz guard zone between channels.[8]

In specs, sometimes, other parameters such as vestigial sideband characteristics and gamma correction of the display device are also given.

System B has variously been used with both the PAL or SECAM colour systems. It could have been used with a 625-line variant of the NTSC color system, but apart from possible technical tests in the 1950s, this has never been done officially.

When used with PAL, the colour subcarrier is 4.43361875 MHz and the sidebands of the PAL signal have to be truncated on the high-frequency side at +570 kHz (matching the rolloff of the luminance signal at +5.0 MHz). On the low-frequency side, the full 1.3 MHz sideband is radiated. (This behaviour would cause massive U/V crosstalk in the NTSC system, but delay-line PAL hides such artefacts.)

Neither colour encoding system has any effect on the bandwidth of system B as a whole.

Enhancements have been made to the specification of System B's audio capabilities over the years. The introduction of Zweiton in the 1970s allowed for stereo sound or twin monophonic audio tracks (possibly in different languages for instance). This was implemented by adding a second FM audio subcarrier at +5.74 MHz. Alternatively, starting in the late 1980s and early 1990s it became possible to replace the second audio FM subcarrier with a digital signal carrying NICAM sound. Either of these extensions to audio capability have eaten into the guard band between channels. Zweiton uses an extra 150 kHz. The alternative NICAM system uses an extra 500 kHz, and needs to be spaced further from the primary audio subcarrier, thus System B with NICAM has only 150 kHz guard zones between channels.

System B was the first internationally accepted 625-line broadcasting standard in the world. A first 625-line system with a 8MHz channel bandwidth was proposed at the CCIR Conference in Stockholm in July 1948 (based on 1946-48 studies in the Soviet Union[9] by Mark Iosifovich Krivosheev[10][11][12][13][14][15][16] ).[3] At a CCIR Geneva meeting in July 1950 Dr. Gerber (a swiss engineer), proposed a modified 625-lines system with a 7MHz channel bandwidth (based on work by Telefunken and Walter Bruch), with the support of Belgium, Denmark, Italy, Netherlands, Sweden, Switzerland.[9] Known as the "Gerber-norm", it was eventually approved along with four other broadcast standards on the next formal CCIR meeting on May 1951 in Geneva.[9][17]

The European 41-68 MHz Band I television allocation was agreed at the 1947 ITU (International Telecommunication Union) conference in 1947, and the first European channel plan (i.e. the use of channels E2 - E4) was agreed in 1952 at the ITU conference in Stockholm. The extension to VHF Band III (i.e. Channels E5 - E12) was also agreed in the 1950s.

Since then, the System B specification has been used with slightly different broadcast frequencies in many other countries.

† Channel 1 was allocated, but never used.
§ Not used in the former East Germany

East Germany before the 1960s

Transmitters were operational on the above channels in 1959. During the 1960s, channels 1 to 3 were deleted and channels E3 to E12 adopted, bringing East Germany into line with the channel allocations used in the West.

Italian channel-spacings were erratic. System B is no longer in use in Italy, the switchover to DVB-T having been completed 4 July 2012.

Note: Band I is no longer used for television in Italy.

Note: Unusually for Europe, Band III is used for DVB-T in Italy. At digital switchover time, Italy took the opportunity to discontinue their erratic System B frequencies, and the digital channels (known as Ch5 through Ch12) are regularly-spaced every 7.0 MHz from 177.5 MHz (and identical to Germany's Band III DVB-T bandplan).

Australia were unique in the world by their use of Band II for television broadcasting.

‡ Channels 3, 4 and 5 were scheduled to be cleared during 1993–96 to make way for FM radio stations in Band II. This clearance action took much longer than was anticipated, and as a result, many stations on channel 3 still remain, along with a few on 4 and 5.

♦ New channel allocations from 1993.
‡ Channels 10 and 11 were shifted up in frequency by 1 MHz to make room for channel 9A. The frequencies of existing stations did not change; only new ones used the new allocations. Digital multiplexes on channels 10 and 11 are using the new channel boundaries.

Australia are nearly unique in the world for their use of 7 MHz channel-spacing (and therefore System B) on UHF.

When the UHF bands came into use in the early 1960s, two variants of System B began to be used on those frequencies.

In most countries, the channels on the UHF bands are 8 MHz wide, but in most system B countries transmissions on the UHF channels still use system B specifications, the only difference being that the guard band between the channels is 1.0 MHz wider than for System B. That system for the UHF bands is known as System G and all RF specifications given above (apart from the guard band width) also apply to system G. Exceptions to this would seem to be Australia, Brunei and Tanzania where the UHF channels are 7 MHz wide, and system B is used on UHF just as it is on VHF.

A few countries (Belgium, several of the Balkan states and Malta) use another variant of system B on UHF which is known as System H. System H is similar to system G but the lower (vestigial) side band is 500 kHz wider. This makes much better use of the 8.0 MHz channels of the UHF bands (though whether any system B/H televisions actually made use of the extra bandwidth is not known).