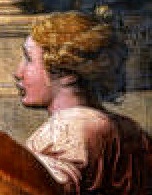 Damaris (Greek: Δάμαρις) is the name of a woman mentioned in a single verse in Acts of the Apostles (17:34) as one of those present when Paul of Tarsus preached in Athens in front of the Athenian Areopagus in c. AD 55.

"Howbeit certain men clave unto him, and believed: among the which was Dionysius the Areopagite, and a woman named Damaris, and others with them." (KJV)

As usually women were not present in Areopagus meetings, Damaris has traditionally been assumed to have been a hetaera (courtesan, high-status prostitute);[2] modern commentators have alternatively suggested she might also have been a follower of the Stoics (who welcomed women among their ranks)[3] or a foreigner visiting Athens.[4] The Georgian text of Acts makes Damaris the wife of Dionysius.[5]

She is a saint of the Greek Orthodox Church, remembered on 3 October together with Dionysius the Areopagite and two other disciples of Dionysius, who also became martyrs.[6] 3 October in the Julian calendar, which is used by the Old Calendarists, currently coincides with 16 October in the Gregorian calendar.

The etymology of the name is uncertain. Proposals include derivation from damar δάμαρ "wife, spouse", a contraction of the classical Greek name Damarete Δαμαρέτη (attested as the name of a daughter of Theron of Acragas and wife of Gelo), or derivation from damalis δάμαλις "heifer"; a Coptic derivation has also been considered.[7]