In statistics, a full factorial experiment is an experiment whose design consists of two or more factors, each with discrete possible values or "levels", and whose experimental units take on all possible combinations of these levels across all such factors. A full factorial design may also be called a fully crossed design. Such an experiment allows the investigator to study the effect of each factor on the response variable, as well as the effects of interactions between factors on the response variable.

For the vast majority of factorial experiments, each factor has only two levels. For example, with two factors each taking two levels, a factorial experiment would have four treatment combinations in total, and is usually called a 2×2 factorial design. In such a design, the interaction between the variables is often the most important. This applies even to scenarios where a main effect and an interaction is present.

Factorial designs were used in the 19th century by John Bennet Lawes and Joseph Henry Gilbert of the Rothamsted Experimental Station.[1]

Ronald Fisher argued in 1926 that "complex" designs (such as factorial designs) were more efficient than studying one factor at a time.[2] Fisher wrote,

"No aphorism is more frequently repeated in connection with field trials, than that we must ask Nature few questions, or, ideally, one question, at a time. The writer is convinced that this view is wholly mistaken."

Nature, he suggests, will best respond to "a logical and carefully thought out questionnaire". A factorial design allows the effect of several factors and even interactions between them to be determined with the same number of trials as are necessary to determine any one of the effects by itself with the same degree of accuracy.

Frank Yates made significant contributions, particularly in the analysis of designs, by the Yates analysis.

The term "factorial" may not have been used in print before 1935, when Fisher used it in his book The Design of Experiments.[3]

Many people examine the effect of only a single factor or variable. Compared to such one-factor-at-a-time (OFAT) experiments, factorial experiments offer several advantages[4][5]

Example of advantages of factorial experiments

In his book, Improving Almost Anything: Ideas and Essays, statistician George Box gives many examples of the benefits of factorial experiments. Here is one.[6] Engineers at the bearing manufacturer SKF wanted to know if changing to a less expensive "cage" design would affect bearing life. The engineers asked Christer Hellstrand, a statistician, for help in designing the experiment.[7] Box reports the following. "The results were assessed by an accelerated life test. … The runs were expensive because they needed to be made on an actual production line and the experimenters were planning to make four runs with the standard cage and four with the modified cage. Christer asked if there were other factors they would like to test. They said there were, but that making added runs would exceed their budget. Christer showed them how they could test two additional factors "for free" – without increasing the number of runs and without reducing the accuracy of their estimate of the cage effect. In this arrangement, called a 2×2×2 factorial design, each of the three factors would be run at two levels and all the eight possible combinations included. The various combinations can conveniently be shown as the vertices of a cube ... " "In each case, the standard condition is indicated by a minus sign and the modified condition by a plus sign. The factors changed were heat treatment, outer ring osculation, and cage design. The numbers show the relative lengths of lives of the bearings. If you look at [the cube plot], you can see that the choice of cage design did not make a lot of difference. … But, if you average the pairs of numbers for cage design, you get the [table below], which shows what the two other factors did. … It led to the extraordinary discovery that, in this particular application, the life of a bearing can be increased fivefold if the two factor(s) outer ring osculation and inner ring heat treatments are increased together."

"Remembering that bearings like this one have been made for decades, it is at first surprising that it could take so long to discover so important an improvement. A likely explanation is that, because most engineers have, until recently, employed only one factor at a time experimentation, interaction effects have been missed."

The simplest factorial experiment contains two levels for each of two factors. Suppose an engineer wishes to study the total power used by each of two different motors, A and B, running at each of two different speeds, 2000 or 3000 RPM. The factorial experiment would consist of four experimental units: motor A at 2000 RPM, motor B at 2000 RPM, motor A at 3000 RPM, and motor B at 3000 RPM. Each combination of a single level selected from every factor is present once.

This experiment is an example of a 22 (or 2×2) factorial experiment, so named because it considers two levels (the base) for each of two factors (the power or superscript), or #levels#factors, producing 22=4 factorial points. Designs can involve many independent variables. As a further example, the effects of three input variables can be evaluated in eight experimental conditions shown as the corners of a cube.

This can be conducted with or without replication, depending on its intended purpose and available resources. It will provide the effects of the three independent variables on the dependent variable and possible interactions.

To save space, the points in a two-level factorial experiment are often abbreviated with strings of plus and minus signs. The strings have as many symbols as factors, and their values dictate the level of each factor: conventionally,

for the first (or low) level, and

for the second (or high) level. The points in this experiment can thus be represented as

) factorial experiment, there are k factors, the ith factor at

levels. If we let

be the set of levels of the ith factor, then the set of treatment combinations (or "cells") is the Cartesian product

. A treatment combination is thus a k-tuple

, say, the experiment is said to be symmetric, and we use the same set

to denote the set of levels of each factor. In a 2-level experiment, for example, we may take

, as above; the treatment combination

A factorial experiment allows for estimation of experimental error in two ways. The experiment can be replicated, or the sparsity-of-effects principle can often be exploited. Replication is more common for small experiments and is a very reliable way of assessing experimental error. When the number of factors is large (typically more than about 5 factors, but this does vary by application), replication of the design can become operationally difficult. In these cases, it is common to only run a single replicate of the design, and to assume that factor interactions of more than a certain order (say, between three or more factors) are negligible. Under this assumption, estimates of such high order interactions are estimates of an exact zero, thus really an estimate of experimental error.

When there are many factors, many experimental runs will be necessary, even without replication. For example, experimenting with 10 factors at two levels each produces 210=1024 combinations. At some point this becomes infeasible due to high cost or insufficient resources. In this case, fractional factorial designs may be used.

Factorial experiments can be used when there are more than two levels of each factor. However, the number of experimental runs required for three-level (or more) factorial designs will be considerably greater than for their two-level counterparts. Factorial designs are therefore less attractive if a researcher wishes to consider more than two levels.

A fundamental concept in experimental design is the contrast. Let

be the expected response to treatment combination t, and let

be the set of treatment combinations. A contrast in

is a linear expression

is a contrast function, or a contrast vector if we fix an order of the treatment combinations. For example, in a one-factor experiment the expression

represents a contrast between level 1 of the factor and the combined impact of levels 2 and 3. The corresponding contrast function

, and the contrast vector is

are contrast functions, so is

for any real number

More generally, we say[9] that a contrast function

. For example, in the

example above, the contrast

represents the main effect of factor

. The corresponding contrast function is given by

; as a contrast vector, it is displayed in the column for factor

in the table above.

, and (b) it is orthogonal to the contrast functions for the main effects of factors

. Similarly, for any subset

having more than two elements, a contrast function

belongs the interaction between the factors listed in

if (a) its values depend only on the levels

and (b) it is orthogonal to all contrasts of lower order among those factors.

the set of those belonging to the interaction between factors

denote the set of constant functions on

. We have thus defined a set

. It is not hard to see that each

consisting of all real-valued functions on

. We have the following well-known, fundamental facts:[10]

These results underpin the usual analysis of variance or ANOVA (see below), in which a total sum of squares is partitioned into the sums of squares for each effect (main effect or interaction), as introduced by Fisher. If contrast functions are written as vectors, then the left-hand side of item 2 is

, the number of treatment combinations. The dimension of

is the degrees of freedom for the corresponding effect.

In a two-factor or

and the corresponding dimensions are

When the factors are continuous, two-level factorial designs assume that the effects are linear. If a quadratic effect is expected for a factor, a more complicated experiment should be used, such as a central composite design. Optimization of factors that could have quadratic effects is the primary goal of response surface methodology.

Montgomery [4] gives the following example of analysis of a factorial experiment:.

Onwards, the minus (−) and plus (+) signs will indicate whether the factor is run at a low or high level, respectively.

The non-parallel lines in the A:C interaction plot indicate that the effect of factor A depends on the level of factor C. A similar results holds for the A:D interaction. The graphs indicate that factor B has little effect on filtration rate. The analysis of variance (ANOVA) including all 4 factors and all possible interaction terms between them yields the coefficient estimates shown in the table below. 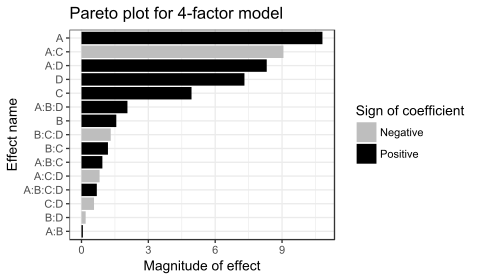 Pareto plot showing the relative magnitude of the factor coefficients.

Because there are 16 observations and 16 coefficients (intercept, main effects, and interactions), p-values cannot be calculated for this model. The coefficient values and the graphs suggest that the important factors are A, C, and D, and the interaction terms A:C and A:D.

Cube plot for the ANOVA using factors A, C, and D, and the interaction terms A:C and A:D. The plot aids in visualizing the result and shows that the best combination is A+, D+, and C−.

The best filtration rate is seen when A and D are at the high level, and C is at the low level. This result also satisfies the objective of reducing formaldehyde (factor C). Because B does not appear to be important, it can be dropped from the model. Performing the ANOVA using factors A, C, and D, and the interaction terms A:C and A:D, gives the result shown in the following table, in which all the terms are significant (p-value < 0.05).