There have been 7 lieutenant generals in the United States Space Force, one of whom was promoted to four-star general. All 7 achieved that rank while on active duty in the U.S. Space Force, and all were commissioned via identical paths to Air Force commissioned officers: 3 via the U.S. Air Force Academy (USAFA), and 4 via Air Force Reserve Officer Training Corps (AFROTC) at a civilian university.

Entries in the following list of lieutenant generals are indexed by the numerical order in which each officer was promoted to that rank while on active duty, or by an asterisk (*) if the officer did not serve in that rank while on active duty in the U.S. Space Force or was promoted to four-star rank while on active duty in the U.S. Space Force. Each entry lists the general's name, date of rank,[a] active-duty positions held while serving at three-star rank,[b] number of years of active-duty service at three-star rank (Yrs),[c] year commissioned and source of commission,[d] number of years in commission when promoted to three-star rank (YC),[e] and other biographical notes (years of birth and death are shown in parentheses in the Notes column).[f] Lieutenant generals of the U.S. Air Force who transferred to the Space Force in the equivalent grade or promoted to grade after transfer to the Space Force are included. Maj. Gen. B. Chance Saltzman is presented his three-star flag during his promotion ceremony at the Pentagon on 14 August 2020.

The rank of lieutenant general in the United States Space Force is identical to its equivalents in the Army, Marine Corps and Air Force in that it is strictly ex officio, tied to positions requiring the officeholder to hold said rank. As a result, upon vacating such a position, the officeholder is reduced to their highest permanent grade, but may retain their temporary grade outside of statutory limits for up to 60 days pending reassignment to a position of equal or higher importance.[2]

The first three-star general in the Space Force was B. Chance Saltzman, who was promoted on 14 August 2020 with date of rank on 7 August.[1]

Both initial general officer setups for the Space Force provided for six lieutenant generals in the new service.[3] This goal fully materialized in August 2021, with the promotion of Michael Guetlein to lieutenant general as commander of the Space Systems Command.[4] 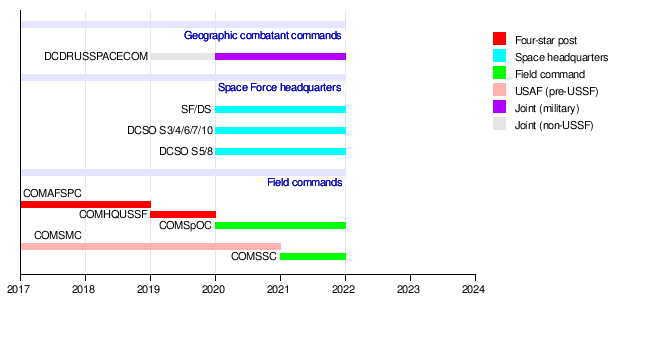