The following is a list of notable unsolved problems grouped into broad areas of physics.[1]

Some of the major unsolved problems in physics are theoretical, meaning that existing theories seem incapable of explaining a certain observed phenomenon or experimental result. The others are experimental, meaning that there is a difficulty in creating an experiment to test a proposed theory or investigate a phenomenon in greater detail.

There are still some questions beyond the Standard Model of physics, such as the strong CP problem, neutrino mass, matter–antimatter asymmetry, and the nature of dark matter and dark energy.[2][3] Another problem lies within the mathematical framework of the Standard Model itself—the Standard Model is inconsistent with that of general relativity, to the point that one or both theories break down under certain conditions (for example within known spacetime singularities like the Big Bang and the centres of black holes beyond the event horizon). Estimated distribution of dark matter and dark energy in the universe 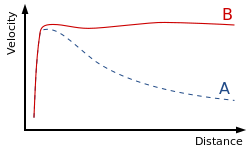 Rotation curve of a typical spiral galaxy: predicted (A) and observed (B). Can the discrepancy between the curves be attributed to dark matter?

The "island of stability" in the proton vs. neutron number plot for heavy nuclei

A sample of a cuprate superconductor (specifically BSCCO). The mechanism for superconductivity of these materials is unknown.

Magnetoresistance in a u = 8/5 fractional quantum Hall state.