Many mathematical problems have been stated but not yet solved. These problems come from many areas of mathematics, such as theoretical physics, computer science, algebra, analysis, combinatorics, algebraic, differential, discrete and Euclidean geometries, graph theory, group theory, model theory, number theory, set theory, Ramsey theory, dynamical systems, and partial differential equations. Some problems belong to more than one discipline and are studied using techniques from different areas. Prizes are often awarded for the solution to a long-standing problem, and some lists of unsolved problems, such as the Millennium Prize Problems, receive considerable attention.

This list is a composite of notable unsolved problems mentioned in previously published lists, including but not limited to lists considered authoritative. Although this list may never be comprehensive, the problems listed here vary widely in both difficulty and importance.

Lists of unsolved problems in mathematics

Various mathematicians and organizations have published and promoted lists of unsolved mathematical problems. In some cases, the lists have been associated with prizes for the discoverers of solutions. The Riemann zeta function, subject of the celebrated and influential unsolved problem known as the Riemann hypothesis

Of the original seven Millennium Prize Problems listed by the Clay Mathematics Institute in 2000, six remain unsolved to date:[6] In the Bloch sphere representation of a qubit, a SIC-POVM forms a regular tetrahedron. Zauner conjectured that analogous structures exist in complex Hilbert spaces of all finite dimensions.

The area of the blue region converges to the Euler–Mascheroni constant, which may or may not be a rational number. In three dimensions, the kissing number is 12, because 12 non-overlapping unit spheres can be put into contact with a central unit sphere. (Here, the centers of outer spheres form the vertices of a regular icosahedron.) Kissing numbers are only known exactly in dimensions 1, 2, 3, 4, 8 and 24. An instance of the Erdős–Faber–Lovász conjecture: a graph formed from four cliques of four vertices each, any two of which intersect in a single vertex, can be four-colored.

Paths and cycles in graphs is finite; in its Cayley graph, shown here, each of its 27 elements is represented by a vertex. The question of which other groups 6 is a perfect number because it is the sum of its proper positive divisors, 1, 2 and 3. It is not known how many perfect numbers there are, nor if any of them are odd. 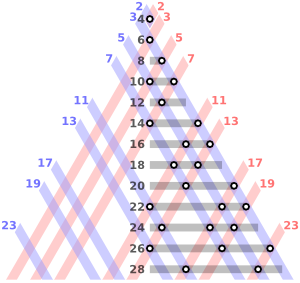 Goldbach's conjecture states that all even integers greater than 2 can be written as the sum of two primes. Here this is illustrated for the even integers from 4 to 28.

Note: These conjectures are about models of Zermelo-Frankel set theory with choice, and may not be able to be expressed in models of other set theories such as the various constructive set theories or non-wellfounded set theory. The unknotting problem asks whether there is an efficient algorithm to identify when the shape presented in a knot diagram is actually the unknot.

This section duplicates the scope of other articles. Please discuss this issue on the talk page and edit it to conform with Wikipedia's Manual of Style by replacing the section with a link and a summary of the repeated material or by spinning off the repeated text into an article in its own right. (August 2022) Ricci flow, here illustrated with a 2D manifold, was the key tool in Grigori Perelman's solution of the Poincaré conjecture.