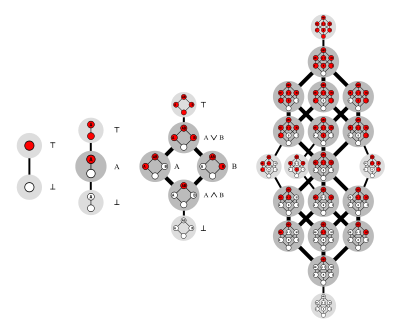 The free distributive lattices of monotonic Boolean functions on 0, 1, 2, and 3 arguments, with 2, 3, 6, and 20 elements respectively (move mouse over right diagram to see description)

Accurate asymptotic estimates of M(n) and an exact expression as a summation are known.[1] However Dedekind's problem of computing the values of M(n) remains difficult: no closed-form expression for M(n) is known, and exact values of M(n) have been found only for n ≤ 8.[2]

A Boolean function is a function that takes as input n Boolean variables (that is, values that can be either false or true, or equivalently binary values that can be either 0 or 1), and produces as output another Boolean variable. It is monotonic if, for every combination of inputs, switching one of the inputs from false to true can only cause the output to switch from false to true and not from true to false. The Dedekind number M(n) is the number of different monotonic Boolean functions on n variables.[3]

An antichain of sets (also known as a Sperner family) is a family of sets, none of which is contained in any other set. If V is a set of n Boolean variables, an antichain A of subsets of V defines a monotone Boolean function f, where the value of f is true for a given set of inputs if some subset of the true inputs to f belongs to A and false otherwise. Conversely every monotone Boolean function defines in this way an antichain, of the minimal subsets of Boolean variables that can force the function value to be true. Therefore, the Dedekind number M(n) equals the number of different antichains of subsets of an n-element set.[4]

The Dedekind numbers also count (one more than) the number of abstract simplicial complexes on n elements, families of sets with the property that any subset of a set in the family also belongs to the family. Any antichain determines a simplicial complex, the family of subsets of antichain members, and conversely the maximal simplices in a complex form an antichain.[7]

For n = 2, there are six monotonic Boolean functions and six antichains of subsets of the two-element set {x,y}:

The exact values of the Dedekind numbers are known for 0 ≤ n ≤ 8:

Kisielewicz (1988) rewrote the logical definition of antichains into the following arithmetic formula for the Dedekind numbers:

th bit of the number

, which can be written using the floor function as

However, this formula is not helpful for computing the values of M(n) for large n due to the large number of terms in the summation.[citation needed]

elements, and the right inequality was proven by Kleitman & Markowsky (1975).

for even n, and

for odd n, where