In combinatorial mathematics, the Catalan numbers are a sequence of natural numbers that occur in various counting problems, often involving recursively defined objects. They are named after the French-Belgian mathematician Eugène Charles Catalan (1814–1894).

An alternative expression for Cn is

which is equivalent to the expression given above because

Asymptotically, the Catalan numbers grow as

in the sense that the quotient of the nth Catalan number and the expression on the right tends towards 1 as n approaches infinity. This can be proved by using the asymptotic growth of the central binomial coefficients, by Stirling's approximation for

, or via generating functions.

The Catalan numbers have the integral representations Also, the interior of the correctly matching closing Y for the first X of a Dyck word contains the description of the left subtree, with the exterior describing the right subtree. This can be represented by listing the Catalan elements by column height:[4] Proof of the formula

There are several ways of explaining why the formula

solves the combinatorial problems listed above. The first proof below uses a generating function. The other proofs are examples of bijective proofs; they involve literally counting a collection of some kind of object to arrive at the correct formula.

For example, every Dyck word w of length ≥ 2 can be written in a unique way in the form

The generating function for the Catalan numbers is defined by

From the two possibilities, the second must be chosen because only the choice of the second gives

This is a special case of Newton's generalized binomial theorem; as with the general theorem, it can be proved by computing derivatives to produce its Taylor series.

and substituting this power series into the expression for c(x), the expansion simplifies to

(see 'proof of recurrence' above)

We count the number of paths which start and end on the diagonal of a n × n grid. All such paths have n right and n up steps. Since we can choose which of the 2n steps are up or right, there are in total

monotonic paths of this type. A bad path crosses the main diagonal and touches the next higher diagonal (red in the illustration).

Since there are still 2n steps, there are now n + 1 up steps and n − 1 right steps. So, instead of reaching (n,n), all bad paths after reflection end at (n − 1, n + 1). Because every monotonic path in the (n − 1) × (n + 1) grid meets the higher diagonal, and because the reflection process is reversible, the reflection is therefore a bijection between bad paths in the original grid and monotonic paths in the new grid.

The number of bad paths is therefore:

and the number of Catalan paths (i.e. good paths) is obtained by removing the number of bad paths from the total number of monotonic paths of the original grid,

In terms of Dyck words, we start with a (non-Dyck) sequence of n X's and n Y's and interchange all X's and Y's after the first Y that violates the Dyck condition. After this Y, note that there is exactly one more Y than there are Xs.

This bijective proof provides a natural explanation for the term n + 1 appearing in the denominator of the formula for Cn. A generalized version of this proof can be found in a paper of Rukavicka Josef (2011).[7]

Figure 2. A path with exceedance 5.

Figure 3. The green and red portions are being exchanged.

The exceedance has dropped from 3 to 2. In fact, the algorithm causes the exceedance to decrease by 1 for any path that we feed it, because the first vertical step starting on the diagonal (at the point marked with a black dot) is the unique vertical edge that passes from above the diagonal to below it - all the other vertical edges stay on the same side of the diagonal. 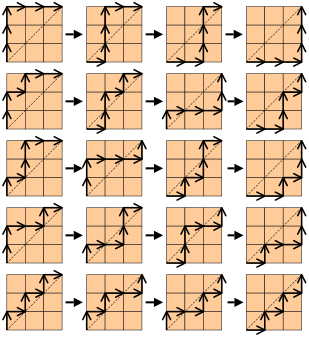 Figure 4. All monotonic paths in a 3×3 grid, illustrating the exceedance-decreasing algorithm.

It is also not difficult to see that this process is reversible: given any path P whose exceedance is less than n, there is exactly one path which yields P when the algorithm is applied to it. Indeed, the (black) edge X, which originally was the first horizontal step ending on the diagonal, has become the last horizontal step starting on the diagonal. Alternatively, reverse the original algorithm to look for the first edge that passes below the diagonal.

Figure 4 illustrates the situation for n = 3. Each of the 20 possible monotonic paths appears somewhere in the table. The first column shows all paths of exceedance three, which lie entirely above the diagonal. The columns to the right show the result of successive applications of the algorithm, with the exceedance decreasing one unit at a time. There are five rows, that is, C3 = 5, and the last column displays all paths no higher than the diagonal.

Using Dyck words, start with a sequence from

be the first X that brings an initial subsequence to equality, and configure the sequence as

. The new sequence is

This proof uses the triangulation definition of Catalan numbers to establish a relation between Cn and Cn+1.

Given a polygon P with n + 2 sides and a triangulation, mark one of its sides as the base, and also orient one of its 2n + 1 total edges. There are (4n + 2)Cn such marked triangulations for a given base.

Given a polygon Q with n + 3 sides and a (different) triangulation, again mark one of its sides as the base. Mark one of the sides other than the base side (and not an inner triangle edge). There are (n + 2)Cn + 1 such marked triangulations for a given base.

There is a simple bijection between these two marked triangulations: We can either collapse the triangle in Q whose side is marked (in two ways, and subtract the two that cannot collapse the base), or, in reverse, expand the oriented edge in P to a triangle and mark its new side.

Applying the recursion with

This proof is based on the Dyck words interpretation of the Catalan numbers, so Cn is the number of ways to correctly match n pairs of brackets. We denote a (possibly empty) correct string with c and its inverse (where "[" and "]" are exchanged) with c'. Since any c can be uniquely decomposed into c = [ c1 ] c2, summing over the possible spots to place the closing bracket immediately gives the recursive definition

Let b stand for a balanced string of length 2n—that is, containing an equal number of "[" and "]", so

Any incorrect balanced string starts with c ], and the remaining string has one more [ than ], so

Also, from the definitions, we have:

This proof is based on the Dyck words interpretation of the Catalan numbers and uses the cycle lemma of Dvoretzky and Motzkin.[8][9]

We call a sequence of X's and Y's dominating if, reading from left to right, the number of X's is always strictly greater than the number of Y's. The cycle lemma[10] states that any sequence of

dominating cyclic permutations. To see this, arrange the given sequence of

X's. Each of these X's was the start of a dominating cyclic permutation before anything was removed.

. This is dominating, but none of its cyclic permutations

, there is exactly one dominating cyclic permutation. Removing the leading X from it (a dominating sequence must begin with X) leaves a Dyck sequence. Since there are

in total, and each one belongs to an equivalence class of size 2n+1 (because n, m and 2n+1 are pairwise coprime), we have

Y's, each of which corresponds to exactly one Dyck sequence, hence

The n×n Hankel matrix whose (i, j) entry is the Catalan number Ci+j−2 has determinant 1, regardless of the value of n. For example, for n = 4 we have

Moreover, if the indexing is "shifted" so that the (i, j) entry is filled with the Catalan number Ci+j−1 then the determinant is still 1, regardless of the value of n. For example, for n = 4 we have

Taken together, these two conditions uniquely define the Catalan numbers.

Another feature unique to the Catalan–Hankel matrix is the determinant of the n×n submatrix starting at 2 has determinant n + 1. The Catalan sequence was described in the 18th century by Leonhard Euler, who was interested in the number of different ways of dividing a polygon into triangles. The sequence is named after Eugène Charles Catalan, who discovered the connection to parenthesized expressions during his exploration of the Towers of Hanoi puzzle. The reflection counting trick (second proof) for Dyck words was found by Désiré André in 1887.

In 1988, it came to light that the Catalan number sequence had been used in China by the Mongolian mathematician Mingantu by 1730.[12][13] That is when he started to write his book Ge Yuan Mi Lu Jie Fa [The Quick Method for Obtaining the Precise Ratio of Division of a Circle], which was completed by his student Chen Jixin in 1774 but published sixty years later. Peter J. Larcombe (1999) sketched some of the features of the work of Mingantu, including the stimulus of Pierre Jartoux, who brought three infinite series to China early in the 1700s.

For instance, Ming used the Catalan sequence to express series expansions of sin(2α) and sin(4α) in terms of sin(α).

The two-parameter sequence of non-negative integers

, this is just two times the ordinary Catalan numbers, and for

,[15] and it is an open problem to find a general combinatorial interpretation.

Sergey Fomin and Nathan Reading have given a generalized Catalan number associated to any finite crystallographic Coxeter group, namely the number of fully commutative elements of the group; in terms of the associated root system, it is the number of anti-chains (or order ideals) in the poset of positive roots. The classical Catalan number

corresponds to the root system of type

The Catalan k-fold convolution is:[17]

The Catalan numbers are a solution of a version of the Hausdorff moment problem.[18]