Scale of proportions by Le Corbusier 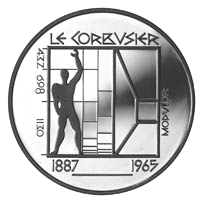 The Modulor is an anthropometric scale of proportions devised by the Swiss-born French architect Le Corbusier (1887–1965).

It was developed as a visual bridge between two incompatible scales, the Imperial and the metric systems. It is based on the height of a man with his arm raised. Modulor considered the standard human height as 1.75 m, excluding femenine measures. The dimensions were refined with overall height of raised arm was set at 2.26 m.

It was used as a system to set out a number of Le Corbusier's buildings and was later codified into two books.

Le Corbusier developed the Modulor in the long tradition of Vitruvius, Leonardo da Vinci's Vitruvian Man, the work of Leon Battista Alberti, and other attempts to discover mathematical proportions in the human body and then to use that knowledge to improve both the appearance and function of architecture. [1] The system is based on human measurements, the double unit, the Fibonacci numbers, and the golden ratio. Le Corbusier described it as a "range of harmonious measurements to suit the human scale, universally applicable to architecture and to mechanical things".

With the Modulor, Le Corbusier sought to introduce a scale of visual measures that would unite two virtually incompatible systems: the Anglo-Saxon foot and inch and the international metric system.[2] Whilst he was intrigued by ancient civilisations who used measuring systems linked to the human body: elbow (cubit), finger (digit), thumb (inch) etc., he was troubled by the metre as a measure that was a forty-millionth part of the meridian of the earth.[3]

In 1943, in response to the French National Organisation for Standardisation's (AFNOR) requirement for standardising all the objects involved in the construction process, Le Corbusier asked an apprentice to consider a scale based upon a man with his arm raised to 2.20 m in height.[4] The result, in August 1943 was the first graphical representation of the derivation of the scale. This was refined after a visit to the Dean of the Faculty of Sciences in Sorbonne on 7 February 1945 which resulted in the inclusion of a golden section into the representation.[5]

Whilst initially the Modulor Man's height was based on a French man's height of 1.75 metres (5 ft 9 in) it was changed to 1.83 m in 1946 because "in English detective novels, the good-looking men, such as policemen, are always six feet tall!".[6] The dimensions were refined to give round numbers and the overall height of the raised arm was set at 2.262 m.

Of the works leading to the creation of the Modulor, Robin Evans notes that the female body "was only belatedly considered and rejected as a source of proportional harmony".[1]

On 10 January 1946 during a visit to New York, Le Corbusier met with Henry J. Kaiser, an American industrialist whose Kaiser Shipyard had built Liberty ships during World War II. Kaiser's project was to build ten thousand new houses a day, but he had changed his mind and decided to build cars instead.[7] During the interview, Le Corbusier sympathised with Kaiser's problems of coordinating the adoption of equipment between the American and British armies because of the differences in units of length; and promoted his own harmonious scale.[8]

On the same trip he met with David E. Lilienthal of the Tennessee Valley Authority to promote the use of his harmonious scale on further civil engineering projects.[9]

He also applied the principle of the Modulor to the efficient design of distribution crates in post war France.[10]

The Modulor 2 was drawn by André Maissonier and Justino Serralta.[11]

Le Corbusier used his Modulor scale in the design of many buildings, including:

In his first book on the subject The Modulor, Le Corbusier has a chapter on the use of the modular in the Unité d'Habitation. The modular governs: the plan, section and elevations; the brise-soleil; the roof; the supporting columns and the plan and section of the apartments. It was also used for the dimensions of the commemorative stone laid on 14 October 1947.[12] A version of the Modulor Man was cast in concrete near the entrance.

In the Church of Sainte Marie de La Tourette Le Corbusier floors the majority of the church in pale concrete panels set to Modulor dimensions.[13] Also, the engineer Iannis Xenakis applied the Modulor system to the design of the exterior vertical ventilators or "ondulatoires".[14]

Carpenter Center for the Visual Arts

In the Carpenter Center the Modulor system was used for the brise-soleil distances, the floor to floor heights, the bay distances and the column thicknesses.[15] Le Corbusier conceived that the dimensioning of the entrance ramp would be "visible essay on the mathematics of the human body".[16]

In this image of the Modulor in Berlin, there are several messages:

The 2004 reprinted box set including both books was printed in a square format using the Modulor with the series twenty seven to one hundred and forty reduced in size to one tenth.[17]

Back side of the Swiss 10 CHF banknote, showing the Modulor