The University of Montana (UM) is a public research university in Missoula, Montana. UM is a flagship institution of the Montana University System[5] and its second largest campus. UM reported 10,962 undergraduate and graduate students in the fall of 2018. It is classified among "R1: Doctoral Universities – Very high research activity" as of 2022.[6]

The University of Montana ranks 17th in the nation and fifth among public universities in producing Rhodes Scholars;[7] it has 11 Truman Scholars, 14 Goldwater Scholars, and 40 Udall Scholars to its name.[8][9]

University of Montana
circa 1900

Montana was admitted to the Union on November 8, 1889, and the state legislature soon began to consider where the state's permanent capital and state university would be located. To be sure that the new state university would be located in Missoula, the city's leaders made an agreement with the standing capital of Helena that Missoula would stay out of the bidding for the new capital and would support Helena over its leading competitor, Anaconda. The cities' bids were supported by the rival "Copper Kings," William A. Clark and Marcus Daly, respectively.

Missoula won the legislative vote for the new university at the Third Montana Legislative Assembly in February 1893, and it was formally opened in 1895. While plans for a university campus were progressing, classes were temporarily held at nearby Willard School. The South Missoula Land Company, owned by A.B. Hammond, Richard Eddy and Marcus Daly, joined with the Higgins family in donating land for the new campus. In June 1898 the cornerstone for A.J. Gibson designed University Hall was laid and Missoula became "the University City."

From 1945 until 1965, the name was changed by the legislature to "Montana State University," while the school in Bozeman was known as "Montana State College."[10] 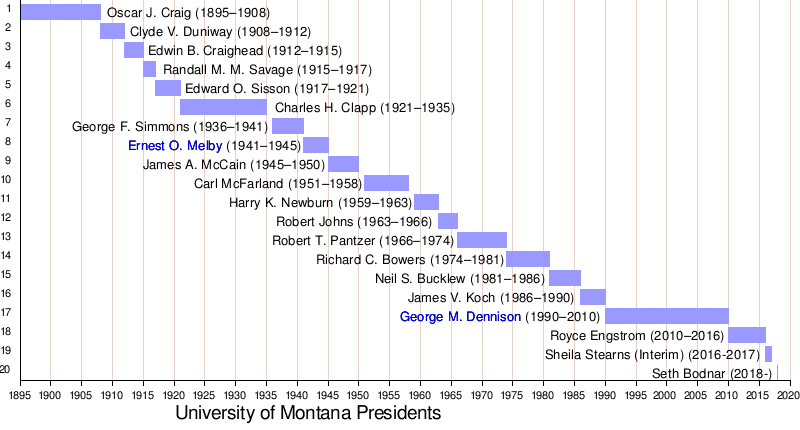 The Phyllis J. Washington College of Education and Human Sciences is divided into five academic departments and the Institute of Educational Research and Service. In 1914, the University of Montana School of Law became a member of The Association of American Law Schools and in 1923, the school received accreditation from the American Bar Association. The W.A. Franke College of Forestry and Conservation offers five undergraduate majors (Ecosystem Science & Restoration; Forestry; Parks, Tourism & Recreation Management; Resource Conservation; and Wildlife Biology) and five Master's of Science and three PhDs. Symbols of the university The original plan of the campus was designed by one of its first professors, Frederich Scheuch, who called for the central oval to be surrounded by immediate and future university buildings. Although Scheuch's plan called for all building entrances to face the center of the Oval, forming a radiating building pattern, buildings were later constructed with three-story in the Renaissance Revival style, with hipped roofs and Spanish green roof tiles.

The first set of buildings were set up around the oval in 1895. Since that time, various campus plans and architectural styles have been used. Today the campus consists of 220 acres (89 ha) and is bordered to the east by Mount Sentinel and the north by the Clark Fork River. The main campus comprises 64 buildings, including nine residence halls and various athletic venues, including Washington–Grizzly Stadium, a 26,500-seat football stadium and the Adams Center (formerly, Dahlberg Arena), a 7,500-seat multi-purpose arena where the university's basketball teams play.

A three-acre (1.2 ha) swath of grass running east to west, marking the traditional center of the university. Today it is divided into quadrants by two intersecting brick-laid paths, though originally the oval was solid grass and forbidden to be crossed by students. A double row of trees was planted around the oval on Arbor Day 1896, but many of the trees have since died and are in the process of being replanted. The original gravel driveway that once surrounded the Oval has also been replaced by sidewalk. The original master plan of the university called for all buildings to face the center of the oval, but this plan proved difficult and a new plan was created in 1935.

On the western extreme of the Oval is a life-sized grizzly bear statue created by ceramic artist and sculptor Rudy Autio in 1969.[21] The bronze statue is 7 feet (2.1 m) in height, weighs 5,000 pounds (2,300 kg), and took a year to create.[22] Many photographs of the university picture the bear with the Oval, University (Main) Hall, and Mount Sentinel's 'M' in the background.

There is debate of when "The 'M'" was first placed on Mount Sentinel. Around 1908, members of the Forestry Club forged a zigzag trail up the mountain and students carried up stones to shape the symbol of the University of Montana. Originally made of whitewashed rocks and only measuring 25 feet (7.6 m) by 25 feet, the very first "M" was poorly constructed and ultimately replaced by a wooden "M" in 1912, which cost $18. That "M," unlike today's "M," stood upright on the face of Mount Sentinel. A larger wooden version of the "M" was built in 1913 and upkeep of the structure was formally charged to each year's freshman class.

When the large wooden "M" was destroyed by a blizzard in 1915, an even larger version was constructed of whitewashed granite. Once again the freshman class was tasked with annual renovation of the symbol, beginning a new tradition. Each year from then on, University of Montana freshmen made the hike up to the "M" to apply a fresh coat of whitewash and remove any weeds and grass that had grown in and around the structure.

The annual tradition ended in 1968 when a 125-by-100-foot (38 by 30 m) concrete "M" was built at a cost of $4,328. Behind the decision to replace rock with concrete were maintenance issues; with the coming of the 1960s, UM students exhibited waning enthusiasm for the annual trek up the hill and for annual upkeep of the "M." Although the annual whitewashing went by the wayside, one tradition that lives on today is the lighting of the "M" during the University's annual Homecoming celebration each fall. Originally lit by a group of students on October 9, 1919 following the fall whitewashing, the event was so popular that students have continued to light the "M" each year during Homecoming week; special beacons light up the giant letter, welcoming former students back to the university.[23]

On the north side of campus, 29 evergreen trees stand in two columns forming Memorial Row along what used to be the path of Van Buren Avenue. The trees, running from the corner of the Oval to Eddy Avenue, were planted in 1919 following the end of the Great War to honor UM students, alumni, and faculty who died in the war, some to combat and many more to the influenza epidemic. The trees are Pinus ponderosa (Western Yellow Pines or Ponderosa Pine), the state tree of Montana. Originally, a white T-board stood in front of each tree, with the name of the person whom it honors; in 1925, these were replaced with 35 brass nameplates atop concrete markers. At the same time, the university added a memorial tablet on a boulder near the edge of the Oval closest to Memorial Row. It lists 21 of the 31 honorees from 1919. By 1925, the university had increased the number of names on the official list to 35, and sometime later, it grew to 37.[24]

Points of interest include:

The University of Montana is the main campus for the university, which includes four other campuses. The public university system is one of two in Montana; the other is Montana State University. Both systems are governed as the Montana University System by the Montana Board of Regents, which consists of seven members appointed by the state governor, and confirmed by the state Senate to serve overlapping terms of seven years, except for one student member who is appointed for one year at a time.. The Governor and Superintendent of Public Instruction, both statewide elected officials, are ex officio members of the Board, as is the Commissioner of Higher Education, who is appointed by the Board of Regents.[25]

The Board of Regents appoints the university president, who is directly responsible and accountable to the Commissioner of Higher Education.[26] Over the past 30 years, state support for higher education has dropped dramatically. In 1990, the State of Montana provided for 69% of the educational and general funds budget. It now supports 33% of the general fund or 13% of the university's operating budget. This decrease in funding has, in part, been made up by the university successfully competing for sponsored research money with a growth from $12 million in 1994 to $88 million in 2017 and salaries as low as 3/5 the national average.[27]

The University of Montana is also home to a variety of projects, research centers, and institutes.

The Montana Kaimin, founded in 1898, is the student-run college newspaper. It is independent of the university. It attracted national attention in 2009, when football coach Bobby Hauck refused to take questions from the paper in retaliation for a story about an alleged assault by two Grizzly football players.[28] The Montanan is the university's alumni magazine, published by the University Relations office. CutBank, founded in 1973 by the Creative Writing Program, is a literary magazine. Camas: The Nature of the West, is a literary journal run by graduate students of the Environmental Studies Program.

KBGA (89.9 FM) is the college radio station. KUFM-FM is the flagship and founding station of Montana Public Radio. Founded in 1965, its studios are located in the Broadcast Media Center, of the Performing Arts/Radio Television Center. KUFM-TV (Channel 11) is the local Montana PBS station.

The University of Montana's International Program began as the International Student club in 1924. It was founded by Alex Stepanzoff and four other Russians who were the first foreign exchange students at the university and is the oldest student organization at the university. The first study abroad programs were created with programs to France, Germany, and Spain in 1971. In 1981, the Mansfield Center was established and certification in teaching of English as a second language (TESL) began.[30] As of 2010, the university has partnerships established with over 90 universities in over 40 countries. The largest number of partnership are with universities in Japan (eight), China (seven), and Chile (seven).[31]

The athletic teams are nicknamed the Montana Grizzlies, often shortened to Griz or Lady Griz (Lady Griz is only used when referring to the women's basketball team; all other women's teams are known as the Griz). The university has competed in the NCAA's Big Sky Conference since the conference was formed in 1963. From 1924 to 1950, the University of Montana was a member of the Pacific Coast Conference (precursor to today's Pac-12). The University of Montana has an ongoing rivalry with Montana State University, most notably the cross-state football matchups, known as the "Brawl of the Wild."

The mascot of the university is Monte, a Grizzly Bear. In 1897, a live bear cub traveled with UM's football team, then known as the "Bears" (the "Grizzlies" name was adopted in 1923). Numerous live bear cubs who served as university mascots, first named Teddy, then Fessy and finally, in the 1960s, Cocoa. UM's costumed mascot during the 1980s, dubbed Otto, donned a variety of fun-loving outfits to entertain crowds at Grizzly football games. Monte (short for Montana) was born in the mountains of Missoula in the fall 1993. The 2002–03 and 2004–05 National Champion Mascot of the Year (Capital One/ESPN) has evolved into a "motorcycle-riding, break-dancing, back flipping, slam-dunking, movie-making, crowd-surfing, goal post smashing, prank-pulling superstar."[39]

Entertainment and the art