Washington is a city in Beaufort County, North Carolina, United States, located on the northern bank of the Pamlico River. The population was 9,744 at the 2010 census.[4] It is the county seat of Beaufort County.[5] It is commonly known as "Original Washington" or "Little Washington" to distinguish it from Washington, D.C.[6][7] The closest major city is Greenville, approximately 20 miles (32 km) to the west.

Established in 1776 on land donated by Col. James Bonner, Washington is the first city named after George Washington, the first president of the United States.[8]

The settlement at the current location of the city was founded in the 1770s by James Bonner on his land and was known as Forks of the Tar. In 1776, it was renamed Washington. During the American Revolutionary War, Washington served as a supply port when major neighboring ports were under British siege.[9]

Map of Washington during the American Civil War 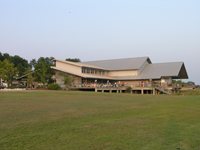 Washington has a range of historical buildings and landmarks, with some dating back to colonial and Victorian eras.[13] Historic sites include the Bank of Washington, West End Branch, Beaufort County Courthouse, Bowers-Tripp House, North Market Street Historic District, Rosedale, Washington Historic District, and Zion Episcopal Church are listed on the National Register of Historic Places.[14]

A Farmer's and Artisan's Market is held regularly on the town's green areas on the waterfront.

The Turnage Theatre, a restored historic vaudeville and movie theater, reopened in the downtown area in 2014 and hosts plays and other types of live entertainment.[15] Between 1993 and 2017 a downtown music and art festival called "Music in the Streets" was held every third Friday during summer to attract people to downtown shops and restaurants.[16]

A cannonball from the Union attack on Washington during the American Civil War is displayed in an attorney's office on Water Street, and many nearby towns also contain Civil War artifacts and museums. Civil War re-enacters meet in the outskirts of Washington every year.

Public education is administered by Beaufort County Schools. Schools located in Washington include:

The Washington Daily News was awarded the Pulitzer Prize for Meritorious Public Service in 1990 for a series of stories concerning local water contamination, making it the smallest daily newspaper in history to win the award.[citation needed]

In 2009, the newspaper The Beaufort Observer went from a bi-monthly print publication to an online publication.