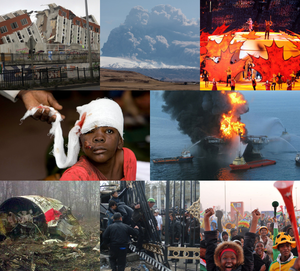 From top left, clockwise: The 2010 Chile earthquake was one of the strongest recorded in history; The Eruption of Eyjafjallajökull in Iceland disrupts air travel in Europe; A scene from the opening ceremony of the 2010 Winter Olympics in Vancouver, British Columbia, Canada; The Deepwater Horizon drilling rig explosion and subsequent oil spill becomes the worst marine oil spill in history; Spectators watch a football match with their famous vuvuzelas during the 2010 FIFA World Cup, which was held in South Africa; people entering the White House in Bishkek on 7 April during the Kyrgyz Revolution of 2010; the remains of Tu-154 after crash on April 10, 2010 that killed Polish president Lech Kaczyński; a child is treated for injuries following 2010 Haitian earthquake which killed an estimated 100,000 - 250,000 people.
Calendar year

Wikimedia Commons has media related to 2010.

2010 (MMX) was a common year starting on Friday of the Gregorian calendar, the 2010th year of the Common Era (CE) and Anno Domini (AD) designations, the 10th year of the 3rd millennium and the 21st century, and the 1st year of the 2010s decade.

There is a debate among experts and the general public on how to pronounce specific years of the 21st century in English. The year 2010 is pronounced either "twenty-ten" or "two thousand [and] ten".[2] 2010 was the first year to have a wide variation in pronunciation, as the years 2000 to 2009 were generally pronounced "two thousand (and) one, two, three, etc." as opposed to the less common "twenty-oh-_".