Shackle with a spring-loaded gate
This article needs additional citations for verification. Please help improve this article by adding citations to reliable sources. Unsourced material may be challenged and removed.Find sources: "Carabiner" – news · newspapers · books · scholar · JSTOR (February 2013) (Learn how and when to remove this template message) Clockwise from top left: Center is a standard carabiner rating.

Using a carabiner to connect to a rope

A carabiner or karabiner (/ˌkærəˈbiːnər/)[1] is a specialized type of shackle, a metal loop with a spring-loaded gate[2] used to quickly and reversibly connect components, most notably in safety-critical systems. The word is a shortened form of Karabinerhaken (or also short Karabiner), a German phrase for a "spring hook"[3] used by a carbine rifleman, or carabinier, to attach his carabin to a belt or bandolier.

Carabiners are widely used in rope-intensive activities such as climbing, fall arrest systems, arboriculture, caving, sailing, hot air ballooning, rope rescue, construction, industrial rope work, window cleaning, whitewater rescue, and acrobatics. They are predominantly made from both steel and aluminium. Those used in sports tend to be of a lighter weight than those used in commercial applications and rope rescue.

Often referred to as carabiner-style or as mini-biners, carabiner keyrings and other light-use clips of similar style and design have also become popular. Most are stamped with a "Not For Climbing" or similar warning due to a common lack of load-testing and safety standards in manufacturing.

While any metal attaching link with a spring gate is technically a carabiner, the strict usage among the climbing community specifically refers only to those devices manufactured and tested for load-bearing in safety-critical systems like rock and mountain climbing, typically rated to 20 kN or more.

Carabiners on hot air balloons are used to connect the envelope to the basket and are rated at 2.5, 3, or 4 tonnes.[4]

Load-bearing screw-gate carabiners are used to connect the diver's umbilical to the surface supplied diver's harness. They are usually rated for a safe working load of 5 kN or more (equivalent to a weight in excess of approximately 500 kg).[5]

Both solid and wire gate carabiners can be either "straight gate" or "bent gate". Bent-gate carabiners are easier to clip a rope into using only one hand, and so are often used for the rope-end carabiner of quickdraws and alpine draws used for lead climbing.

This section does not cite any sources. Please help improve this section by adding citations to reliable sources. Unsourced material may be challenged and removed.Find sources: "Carabiner" – news · newspapers · books · scholar · JSTOR (December 2017) (Learn how and when to remove this template message)

Locking carabiners have the same general shape as non-locking carabiners, but have an additional mechanism securing the gate to prevent unintentional opening during use. These mechanisms may be either threaded sleeves ("screw-lock"), spring-loaded sleeves ("twist-lock"), magnetic levers ("Magnetron"), other spring loaded unlocking levers or opposing double spring loaded gates ("twin-gate"). 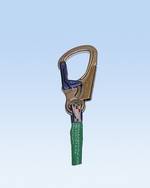 Carabiner with multiple combined auto lock and quick release, useful in via ferrata and arborist work, where two lanyards and carabiners are used