Team sport originating in Ireland; related to polo but played on bicycles

Cycle polo (or bicycle polo or bike polo, polo-vélo in French, Radpolo in German) is a team sport, similar to traditional polo, except that bicycles are used instead of horses. There are two versions of the sport: grass and Hardcourt Bike Polo. The hardcourt game saw a sharp spike in interest in the first decade of the 21st century[1] and new teams are sprouting up across the world in China, Canada, Ireland, Switzerland, France, India, Germany, Pakistan, Ukraine, Russia, Malaysia, Sri Lanka, Indonesia, Hungary, Australia, New Zealand, Sweden, England, Scotland, Argentina, Italy, Spain, USA, Poland, Croatia, Slovenia, Lithuania, Nepal, Brazil and Cuba.

There are two versions of the grass games: the four-player game and the five-player game.

Goals are four metres wide and made with two goal posts without any crossbar.

There are six members in a team, of which four are on field at any one time. The other two are used as substitutes. International matches are played for a duration of 30 minutes, divided into periods of 7.5 minutes known as chukkars. Extra time can be used to determine the winner in the event of the scores being tied at normal time.

A player following the ball on its exact line and taking it on his off side will be entitled to the right of way over all other players.

If a deliberate severe foul is committed at the vicinity of the goal, the team that is fouled is automatically given a goal. Less severe fouls are awarded 15-metre and 25-metre free hits. In the event of deliberate fouls or dangerous fouls, the umpire can issue a yellow card (warning) and in case of repeated or severe fouls a red card (ejection). The ejected player can be replaced by a substitute after the end of the current chukkar if the umpire allows it.[2]

Goals are 4 meters wide (5 meters in the national French rules) and made with 2 goal posts and a 2.75 meter (3 yards) high crossbar.

There are eight members in a team of which five are on the field at any one time, including a goalkeeper. The other three are used as substitutes. Matches are played for a duration of 60 minutes divided into 4 periods of 15 minutes each. Extra time can be used to determine the winner in case the scores are tied at normal time.

In order for a player to touch the ball or attack an opponent, the player must be holding the mallet in his right hand, the handlebar in his left hand, and must not be touching the ground with any part of his body. 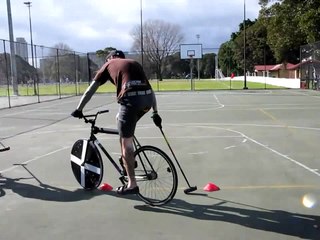 In recent years, an alternate form of the game known as "Hardcourt Bike Polo" has grown in popularity.[1] In this variation, teams composed of three players compete on tennis courts, street hockey rinks, or whatever other surfaces are available. The rules vary slightly by city.

Generally this is a faster game with three members on a team and no substitutions, and with all members on the court at all times. A street hockey ball is used and matches are played until one team scores five points or time has expired, without playing chukkars. During tournament play, a time limit, such as 10 minutes, may be used to maximise the number of tournament rounds possible during the day.

There are three core rules of play:

In the case of a 'foot down' or 'dab' (touching the ground with one's foot) the player must "tap out" by riding to mid-court and hitting a designated area with their mallet. There is usually a tap-out located on either side of the court.

When a team scores a goal, the opposing team must retreat to their half and wait for the other team (player or ball, whichever comes first) to cross the halfway line before engaging in play again.

The North American Hardcourt Bike Polo Association has created an official ruleset,[4] which has helped standardise rules across the globe.

The game was invented in County Wicklow, Ireland, in 1891 by retired champion cyclist Richard J. Mecredy, editor of The Irish Cyclist magazine.[5] In October of that year the first cycle polo match was played at the Scalp (County Wicklow) between Rathclaren Rovers and the Ohne Hast Cycling Club.[6] Towards the end of the 19th century the game reached Great Britain, France, and the United States where the American Star Bicycle was a popular mount.[7] An exhibition match by Hanegan & Hazelton vs. Brady & Murphy, members of "The Original Champion American Bicycle Polo Team", riding Cleveland cycles, was played at the Empire Theatre in London every night during the week of 8 May 1899, claimed in the programme to be the first such exhibition "on any stage".[8] The first international match was played between Ireland and England in 1901. Cycle polo was a demonstration sport at the 1908 London Olympics with Ireland winning, beating Germany.[6][9][10]

The sport reached its peak of popularity in Great Britain during the 1930s with the introduction of the regional leagues. Cycle polo also flourished in France during this period with the establishment of the French league. Internationals between France and Great Britain were held regularly. However the Second World War marked the beginning of the demise of cycle polo in Britain. The sport remained in France though, with league championships held regularly until today.

The 1980s saw the rise of two new powers in cycle polo, India and the United States. The Bicycle Polo Association of America was created in 1994. International cycle polo matches staged a comeback in the 1990s with the first world championship organized in 1996 in the USA. Today there is organized cycle polo being played in Brazil, Argentina, Australia, Canada, France, Germany, Great Britain, India, Ireland, Malaysia, New Zealand, Pakistan, South Africa, Sri Lanka, Sweden, Switzerland and USA. Cycle polo was officially recognized by the Union Cycliste Internationale in 2001.

The Cycle Polo Association of India was officially created in 1966 it has its office in Jaipur, Rajasthan. The first men's nationals were played in 1970 in New Delhi, with the team from Rajasthan emerging victorious.

The Calcutta Cricket & Football Club hosted the first Merchant's Cup Cycle Polo tournament in 1973. In 2012, the CC&FC had organised a Cycle Polo Legend's Tournament where great players of yesteryear such as Vijai Singh, Lakshman Singh and Bikram Das participated.[12] Currently, the CC&FC plays host to the March Mug, the Swaroop Bhanjdeo Memorial Tournament and the CC&FC Trophy. Since 2015 onwards, CC&FC has been hosting the CC&FC All India Invitation Cycle Polo Cup which is organised jointly by the CC&FC along with the Cycle Polo Association of Bengal.

The UK based Pukka Chukkas won the 2012 Acumen Energy Bicycle Polo Cup held at Tiger Tops Karnali on the fringes of the Bardia National Park in Nepal, beating EFG Switzerland in a thrilling final in front of a crowd of over 5,000. The bicycles used in the tournament were donated to local schools and social clubs, and money was raised for the prevention and cure of elephant tuberculosis.

The European Championships is an annual Bicycle Polo competition for European club teams. It is held over three legs each year in France, Germany, Ireland or United Kingdom of Great Britain. The competition began in 2007 following the compromise between French and British/Irish traditional rules.