Tchoukball /ˈtʃuːkbɔːl/ is an indoor team sport developed in the 1970s by Swiss biologist Hermann Brandt. Brandt was concerned about the number of injuries in sport at the time and as part of an educational study he wanted to create a sport that reduced injuries, was not aggressive between players and enabled people of all shapes, sizes, genders, cultures, and backgrounds to play together.

The sport is usually played on an indoor court measuring 27 metres by 16 metres. At each end there is a rebounder (a device similar to a trampoline off which the ball bounces) which measures one square metre and a semicircular D-shaped forbidden zone measuring three metres in radius. Each team can score on both ends of the court, and comprises 12 players, of whom 7 may be on the court at any one time. In order to score a point, the ball must be thrown by an attacking player, hit the rebounder and bounce outside the 'D' without being caught by the defending team. Physical contact is prohibited, and defenders may not attempt to intercept the attacking team's passes. Players may take three steps with the ball, hold the ball for a maximum of three seconds, and teams may not pass the ball more than three times before shooting at the rebounder.

Tchoukball match in progress in Geneva.

Tchoukball was created in Switzerland by Hermann Brandt, who was concerned by the numerous serious injuries among athletes resulting from sports prone to aggression and physical contact. He believed that sports should be not only for champions, but also contribute to the creation of a better and more humane society.[1] He designed tchoukball to contain elements of handball (it is played with hands, and the balls used are similar), volleyball (as the defending team must prevent the ball from falling) and squash (since there is a rebound).

Depending on the category of players (Men/Women/M18/M15/M12), different sizes of balls are used ranging from a circumference of 54 cm to 60 cm and weighs between 325 grams to 475 grams.

Two teams of 7 players each (men or women) compete to score points with the team with the most points at the end winning the game. When a team gains a point, control of the ball is transferred to the other team. 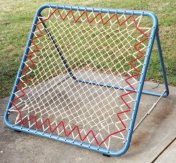 Each team comprises the following positions:

Each side of the court comprises a left shooter, right shooter and 1 or 2 defenders, while the centre usually stays near the middle of the court if this formation is used. The shooters are generally in charge of shooting although in some cases the defender can also take the shot. The defenders are in charge of coordinating the first line of defence while the centre pivot takes charge of the second line of defence. However other formations include not using a centre pivot, the team would bypass the centre and throw full length court passes directly to the shooters/inners. This gives an extra first line defender or a dedicated second line defender.

The FITB, founded in 1971, is based in Geneva, Switzerland. It now comprises 47 member associations and 22 (15+7) countries with a designated FITB Representative. It supports and advises national associations and individuals willing to spread tchoukball in new areas. For instance, tchoukball was recently integrated in the school program of some regions of Senegal. The FITB was a demonstration sport in the 2009 World Games, which took place in Kaohsiung, Taiwan.

Number of Members by Regions:

Non Member, without local federation, but have team

Tchoukball at the World Games