Falmouth is a home rule-class city[2] in, and the county seat of, Pendleton County, Kentucky,[3] in the United States. The population was 2,169 according to the 2010 census. It lies at the confluence of the South and Main forks of the Licking River and is home to Kincaid Regional Theatre.

According to the United States Census Bureau, the city has a total area of 1.3 square miles (3.4 km2), all land.

Possibly settled as early as 1780, Falmouth was laid out by John Waller (1758–1823) and formally established by the state assembly in 1793. Waller named the new settlement after his native Falmouth, Virginia.[5] It was incorporated as a city in 1856.[6]

Elzey Hughes House is listed on the National Register of Historic Places.

Kincaid Regional Theatre, also referred to as KRT, has called Falmouth home since 1983. Since the theatre's founding, KRT has achieved musical theatre excellence by employing local talent from the Cincinnati metropolitan area and beyond. With the help of many supporters, KRT continues to enhance the arts in the community with children and teens theatre workshops and through involvement with local schools. Originally operated at the former Falmouth High School. Other venues have included the Griffin Centre Amphitheatre. KRT now performs at Stonewood Gardens, also in Falmouth.

Falmouth plays host to one of Kentucky's largest fall events, the Kentucky Wool Festival. The Wool Festival is an annual event held adjacent to Kincaid Lake State Park during the first full weekend of October. The festival promotes wool products, crafts, food, among other products. The festival provides fundraising activities to local organizations and entertainment for all age groups. Heritage demonstrations and livestock exhibitions also highlight Pendleton County and Kentucky history. The Kentucky Wool Festival has inspired the local community to adopt the sheep as its unofficial mascot. 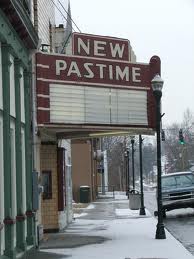 There were 849 households, out of which 31.1% had children under the age of 18 living with them, 41.7% were married couples living together, 15.3% had a female householder with no husband present, and 38.6% were non-families. 34.7% of all households were made up of individuals, and 18.5% had someone living alone who was 65 years of age or older. The average household size was 2.34 and the average family size was 3.03.

Falmouth has a lending library, the Pendleton County Public Library.[10]