Chief Justice of the United States from 1946 to 1953
This article includes a list of general references, but it lacks sufficient corresponding inline citations. Please help to improve this article by introducing more precise citations. (April 2016) (Learn how and when to remove this template message)

Born in Louisa, Kentucky, Vinson pursued a legal career and served in the U.S. Army during World War I. After the war, he served as the Commonwealth's Attorney for the Thirty-Second Judicial District of Kentucky before winning election to the U.S. House of Representatives in 1924. He lost re-election in 1928 but regained his seat in 1930 and served in Congress until 1937. During his time in Congress, he became an adviser and confidante of Missouri Senator Harry S. Truman. In 1937, President Franklin D. Roosevelt appointed Vinson to be a judge on the D.C. Circuit. Vinson resigned from the appellate court in 1943, when he became the Director of the Office of Economic Stabilization. After Truman acceded to the presidency following Roosevelt's death in 1945, Truman appointed Vinson to the position of Secretary of the Treasury. Vinson negotiated the payment of the Anglo-American loan and presided over the establishment of numerous post-war organizations, including the International Bank for Reconstruction and Development and the International Monetary Fund.

After the death of Chief Justice Harlan F. Stone in 1946, Truman appointed Vinson to the Supreme Court. Vinson dissented in the case of Youngstown Sheet & Tube Co. v. Sawyer, which ruled against the Truman administration's control of the nation's steel mills during a strike. He ordered a rehearing of the Briggs v. Elliott case, which was eventually combined into the case known as Brown v. Board of Education.

As of 2023, Vinson is the last Chief Justice to have been appointed by a Democratic president.

Vinson, known universally as Fred, was born in the newly built, eight-room, red brick house in front of the Lawrence County jail in Louisa, Kentucky, where his father served as the Lawrence County Jailer.[citation needed] As a child he would help his father in the jail and even made friends with prisoners who would remember his kindness when he later ran for public office.[citation needed] Vinson worked odd jobs while in school.[citation needed] He graduated from Kentucky Normal School in 1909 [1] and enrolled at Centre College, where he graduated at the top of his class with a Bachelor of Arts degree.[citation needed] While at Centre, he was a member of the Kentucky Alpha Delta chapter of Phi Delta Theta fraternity.[citation needed] He received a Bachelor of Laws from the now defunct College of Law.[2] He entered private practice in Louisa.[3] He first ran for and was elected to office as the City Attorney of Louisa.[3]

Vinson joined the Army during World War I.[3] Following the war, he was elected as the Commonwealth's Attorney for the Thirty-Second Judicial District of Kentucky.[3] Vinson married Julia Roberta Dixon on January 24, 1924 in Ashland, Kentucky.[citation needed] They had two sons.[citation needed]

In 1924, Vinson ran in a special election for his district's seat in Congress after William J. Fields resigned to become the Governor of Kentucky.[citation needed] Vinson was elected as a Democrat and then was reelected twice before losing in 1928.[citation needed] His loss was attributed to his refusal to dissociate his campaign from Alfred E. Smith's presidential campaign.[citation needed] However, Vinson came back to win re-election in 1930, and he served in Congress through 1937.[citation needed]

While he was in Congress he befriended Missouri Senator Harry S. Truman, a friendship that would last throughout his life.[citation needed] He soon became a close advisor, confidant, card player, and dear friend to Truman.[citation needed] After Truman decided against running for another term as president in the early 1950s, he tried to convince a skeptical Vinson to seek the Democratic Party nomination, but Vinson turned down the President's offer.[citation needed] After being equally unsuccessful in enlisting General Dwight D. Eisenhower, President Truman eventually landed on Governor of Illinois Adlai Stevenson as his preferred successor in the 1952 presidential election.[citation needed]

In 1930, former congressman Vinson moved his law practice from Louisa, Kentucky thirty miles north to Ashland. With aspirations to return to Washington, D.C. as congressman, Vinson formed a circle of Ashland friends who could aid him politically and professionally. This group included his next door neighbor Paul G. Blazer.[4] Vinson returned to Washington, D.C. as congressman in 1931. Vinson would become a frontline supporter of President Roosevelt and his cabinet's New Deal revolution.[5]

Secretary of the Treasury 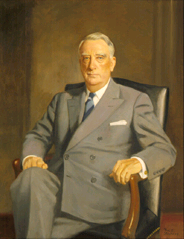 Official portrait as Secretary of the Treasury

Vinson resigned from the bench to become Director of the Office of Economic Stabilization, an executive agency charged with fighting inflation.[citation needed] He also spent time as Federal Loan Administrator (March 6 to April 3, 1945) and director of War Mobilization and Reconversion (April 4 to July 22, 1945).[citation needed] He was appointed United States Secretary of the Treasury by President Truman and served from July 23, 1945, to June 23, 1946.[citation needed]

His mission as Secretary of the Treasury was to stabilize the American economy during the last months of the war and to adapt the United States financial position to the drastically changed circumstances of the postwar world.[citation needed] Before the war ended, Vinson directed the last of the great war-bond drives.[citation needed]

At the end of the war, he negotiated payment of the British Loan of 1946, the largest loan made by the United States to another country ($3.75 billion), and the lend-lease settlements of economic and military aid given to the allies during the war.[citation needed] In order to encourage private investment in postwar America, he promoted a tax cut in the Revenue Act of 1945.[citation needed] He also supervised the inauguration of the International Bank for Reconstruction and Development and the International Monetary Fund, both created at the Bretton Woods Conference of 1944, acting as the first chairman of their respective boards.[citation needed] In 1946, Vinson resigned from the Treasury to be appointed Chief Justice of the United States by Truman.[citation needed]

Swearing in of Chief Justice Vinson on White house portico

Vinson was nominated by President Harry S. Truman on June 6, 1946, to become Chief Justice of the United States, following the death of Harlan F. Stone.[3] Vinson was recommended to Truman by former chief justice Charles Evans Hughes and former associate justice Owen Roberts. Both noted Vinson's experience in all three branches of the federal government, with Hughes telling Truman, "You have a Secretary of the Treasury who has been a Congressman, a Judge of the Court of Appeal, and an executive officer in President Roosevelt's and your cabinets".[6] He was confirmed by the United States Senate by a voice vote on June 20, 1946, received his commission on June 21,[3] and took the oath of office on June 24.[7] His appointment came at a time when the Supreme Court was deeply fractured, both intellectually and personally.[8] One faction was led by Justice Hugo Black, the other by Justice Felix Frankfurter.[8] Vinson was credited with patching this fracture,[according to whom?] at least on a personal level.[citation needed] He was the presiding officer of the Conference of Senior Circuit Judges (now the Judicial Conference of the United States) from 1946 to 1948, and presiding officer of the Judicial Conference of the United States from 1948 to 1953.[3] He served as Circuit Justice for the Fourth Circuit and the District of Columbia Circuit from June 26, 1946, to September 8, 1953.[3] His service ended with his death on September 8, 1953.[3] In his time on the Supreme Court, he wrote 77 opinions for the court and 13 dissents. His most dramatic dissent was when the court voided President Truman's seizure of the steel industry during a strike in a June 3, 1952, decision, Youngstown Sheet & Tube Co. v. Sawyer.[citation needed] His final public appearance at the court was when he read the decision not to review the conviction and death sentence of Julius and Ethel Rosenberg.[citation needed] After Justice William O. Douglas granted a stay of execution to the Rosenbergs at the last moment, Chief Justice Vinson sent special flights out to bring vacationing justices back to Washington in order to ensure the execution of the Rosenbergs.[citation needed] During his tenure as Chief Justice, one of his law clerks was future Associate Justice Byron White.[citation needed]

As Chief Justice, he swore in Harry S. Truman and Dwight D. Eisenhower as President.

When Secretary of State Dean Acheson came under fire from congressional Republicans for being "soft on communism" at the end of 1950 Vinson was briefly mentioned as the new Secretary of State and Dean Acheson as the new chief justice.[citation needed] This speculation died down when President Truman retained Acheson at the State Department.[citation needed]

Vinson died on September 8, 1953, of a heart attack at his Washington home. His body was interred in Pinehill Cemetery in Louisa, Kentucky.[9][10]

An extensive collection of Vinson's personal and judicial papers is archived at the University of Kentucky in Lexington, where they are available for research.[citation needed]

The Fred M. Vinson Birthplace, in Louisa, Kentucky, is listed on the National Register of Historic Places.[citation needed]