The Burger Court was the period in the history of the Supreme Court of the United States from 1969 to 1986, when Warren Burger served as Chief Justice of the United States. Burger succeeded Earl Warren as Chief Justice after the latter's retirement, and Burger served as Chief Justice until his retirement, at which point William Rehnquist was nominated and confirmed as Burger's replacement. The Burger Court is generally considered to be the last liberal court to date. It has been described as a "transitional" court, due to its transition from having the liberal rulings of the Warren Court to the conservative rulings of the Rehnquist Court.[1]

A symbol of the conservative "retrenchment" promised by President Richard Nixon in the 1968 election, Burger was often overshadowed by the liberal William Brennan and the more conservative William Rehnquist.[1] The Burger Court had a less generous interpretation of the protections offered by the Fourth Amendment and the Fifth Amendment than those of the Warren Court, but the Burger Court did not overrule any of the major precedents set by the Warren Court.[2]

In 1969, President Richard Nixon appointed Warren Burger as the replacement for the retiring Earl Warren. Warren had attempted to retire in 1968, but President Lyndon Johnson's nomination of Associate Justice Abe Fortas as Chief Justice was successfully filibustered by Senate Republicans. Fortas resigned from the court in 1969 following an ethics scandal, and Burger was easily confirmed the next month.

The Burger Court thus began on June 23, 1969, with Burger and seven veterans of the Warren Court: Hugo Black, William O. Douglas, John Marshall Harlan II, William Brennan, Potter Stewart, Byron White, and Thurgood Marshall. Nixon attempted to fill Fortas's vacant seat, but Nixon's nominations of Clement Haynsworth and G. Harrold Carswell were both voted down by the Senate. Fortas's replacement, Harry Blackmun, was finally confirmed in 1970; the 391-day vacancy was the longest since the 1860s.[3]

Black and Harlan both died in 1971, and Nixon replaced them with Lewis Powell and William Rehnquist. Nixon considered Mildred Lillie for nomination, but according to former White House Counsel John Dean, Chief Justice Warren E. Burger was deeply opposed to the idea of a woman on the court.[4] Burger threatened to resign over the nomination,[5] and Nixon chose to nominate Lewis Powell rather than Lillie. 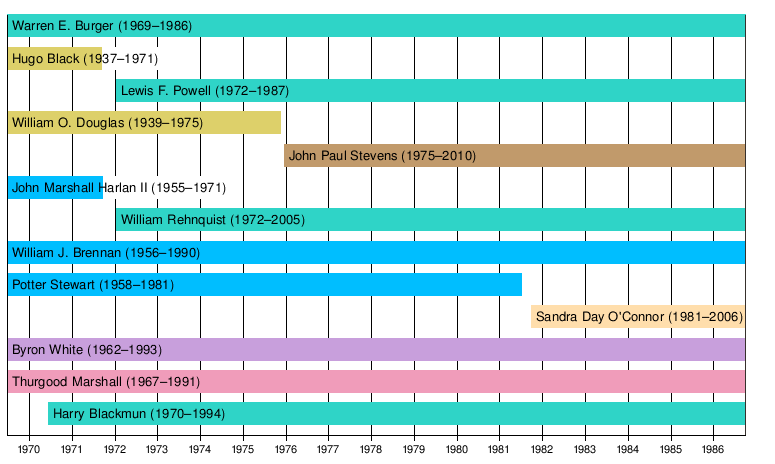 Although Presidents Nixon, Ford, and Reagan all criticized the rulings of the Warren Court and sought to appoint conservative justices, the legacy of the Warren Court remained strong throughout the 1970s.[7] The Burger Court upheld many of the precedents of the Warren Court, even in regards to due process and criminal law.[8] The latter era of the Warren Court was dominated by liberal justices, but the court shifted to the right early in 1969, following Nixon's appointments.[9] Brennan and Marshall generally took liberal positions, while Stevens (after he replaced the liberal Douglas in 1975), Stewart, and White often took centrist positions, and Rehnquist, Burger, and (to a lesser extent) Powell made up the conservative bloc of the court.[9] During his time on the court, Blackmun shifted from the right towards the center, allowing liberals to claim more victories as the 1970s continued.[9] However, the conservatives on the court were strengthened in 1981 when Stewart was replaced by the more conservative O'Connor, who was also the first female justice.[9] Nonetheless, Justice Brennan was often credited for winning the votes of the more centrist judges with his intellectual leadership.[7] The large number of moderates on the court and the resulting decisions gave the court a paradoxical reputation for being both conservative and liberal.[10] Although Burger was often overshadowed by the intellectual leadership of Brennan and Rehnquist, he earned a reputation as important judicial administrator who helped to create institutions such as the National Center for State Courts.[1] Burger also often questioned the need for a judicial remedy in cases; Burger was a strong believer that courts could not cure all injustices, and Burger was not reluctant to limit the standing of plaintiffs.[1]

Works centering on the Burger Court[edit]