Period of the US Supreme Court in 1795

The Rutledge Court refers to the Supreme Court of the United States from June to December 1795, when John Rutledge served as the second Chief Justice of the United States. Rutledge took office as a recess appointment of President George Washington to succeed John Jay. However, Rutledge was denied confirmation by the United States Senate, partly due to his attacks on the Jay Treaty.[1] Rutledge was succeeded in office by Oliver Ellsworth. This was the first time that the Senate rejected a Supreme Court nomination; it remains the only time a "recess appointed" justice was not subsequently confirmed by the Senate.

Rutledge's tenure as Chief Justice lasted for only 138 days. As a result, the court only decided two cases under his leadership. 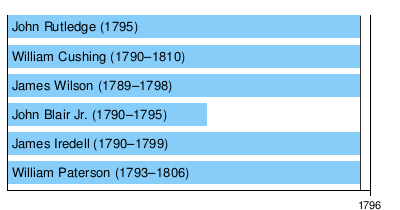