Gotham Central is a police procedural comic-book series that was published by DC Comics. It was written by Ed Brubaker and Greg Rucka, with pencils initially by Michael Lark. The story focused on the Gotham City Police Department and the difficulties of its officers living and working in Gotham City, home of Batman. 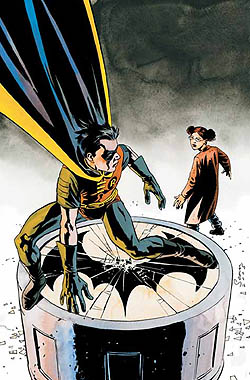 Robin appears with Stacy in artwork for the cover of Gotham Central #35, by Sean Phillips.

Greg Rucka and Ed Brubaker collaborated on the "Officer Down" Batman crossover. They wanted to do a series about the police in Gotham City and finally obtained approval from DC executives. The writers wanted Michael Lark for pencils and waited nearly a year to get him onboard due to scheduling, but used the opportunity to plan out the storylines. They plotted out the new series' elements and decided to script the first story arc together, then split the lengthy cast into two shifts: Rucka would write the GCPD's day shift storylines, Brubaker would take the night shift, and Lark would pencil them both.[1] Gotham Central's debut yielded Eisner Award nominations in 2003 for Best New Series, Best Writer (Rucka), Best Writer (Brubaker), and Best Penciller/Inker (Lark).[2]

Gotham Central repeatedly failed to break the top 100 comics in sales. Despite this, DC Comics were encouraged by the improved sales of the trade paperback collected editions. In an interview, Ed Brubaker stated that the book sold pretty well and was never in danger of cancellation, outselling almost all of Vertigo's books at the time. Ultimately Lark and Brubaker moved on to other projects, and, after three years of publication, the series ended amid the Infinite Crisis aftermath. It continued to have sales troubles through to the conclusion: issue #37 ranked 102nd place,[3] and issue #38 ranked 120th place[4] on the distributor's charts.[5]

End of the series

Despite the sales, writer Greg Rucka assured that DC would have continued publishing Gotham Central as long as he wanted to write it and that it was his decision to conclude the series. Rucka felt that the book was a co-creation between himself, Lark and Brubaker and when they left, with issue #25 and #37 respectively, it was time to move on. The year long break provided by the Infinite Crisis event provided an opportune place to close out the main storylines.[6] At one point, Rucka was in talks to replace Gotham Central with a new series called Streets of Gotham, which would focus on Renee Montoya as a private investigator. Those plans were scrapped in favor of making Montoya a major character in the weekly series 52, with Rucka as a co-writer. In 2009, DC released an unrelated series called Batman: Streets of Gotham that has been described as a mixture of Gotham Central and another canceled Batman series, Batman: Gotham Knights.

The Gotham Central cast was divided between the day and night shifts, with arcs alternating between both sets of characters. Main characters among the ranks of the detectives were Marcus Driver, Romy Chandler, Renee Montoya, Crispus Allen and Josephine "Josie Mac" MacDonald. Their superiors, Commissioner Michael Akins, Captain Margaret "Maggie" Sawyer and Lieutenant Ron Probson also appeared prominently. Jim Corrigan, a corrupt CSI, features near the end of the series.

The supporting cast was mainly pulled from the large roster of the Gotham City Police Department and some characters were subjects of their own story arcs. Long-time supporting characters of Batman, James Gordon and Harvey Bullock, also made recurring appearances. Batman himself, although not often seen, played a prominent role in the series.

Characters after the series' end

In August 2006, Brubaker said that he was told that many people at Warner Bros. loved the comic, and that if they had not had a moratorium on Batman television shows, they "could have set up Gotham Central at WB in a heartbeat".[7]

A television series titled Gotham was in development by Fox in 2013, following the career of Jim Gordon prior to the appearance of Batman.[8] The series premise bears similarities to Gotham Central. It premiered on September 22, 2014.[9] To coincide with Gotham's premiere, DC Comics issued a reprint of Gotham Central #1, at a special price of $1.[10][11]

An untitled police procedural TV series from Matt Reeves was in development, to be set in the same continuity as the film The Batman. Gotham Central was being considered as a title for the series.[12] The development of the show was revealed to not being moving forward and put on hold in March 2022.