Seollal (Korean: 설날; RR: Seollal; MR: Sŏllal) is a festival and national holiday commemorating the first day of the Chinese lunisolar calendar.[1] It is one of the most important traditional holidays in both North and South Korea.[2] The celebration usually lasts three days: the day before New Year, New Year itself, and the day after New Year. During this time, many Koreans visit family, perform ancestral rites, wear the hanbok (한복, 韓服) / Chosŏn-ot (조선옷, 朝鮮옷), eat Korean food, including Korean cuisine, and play folk games. Additionally, children often receive money in a form of red packets[a] from their elders after performing a formal bow, a tradition adopted from China.[3]

While Korean New Year is generally referred to as Seollal, it has been called by many other names.[5] They are listed in the table below.[6]

The prototype of Korean New Year is believed to be found in the 3rd century Chinese historical work, Records of the Three Kingdoms, Book of Wei, Volume 30.[2] Worshipping events with the celebration of singing and dancing was held in Buyeo during the 12th month (殷正月) of the Chinese calendar at that time.[2][7]

Korea's own record of new year celebration is found in Samguk yusa (Memorabilia of the Three Kingdoms), compiled in the 13th century. Under the rule of 21st King of Silla, new year was celebrated in 488 AD. Then celebration of Korean New Year have continued to Goryeo and Joseon. By the 13th century, Korean New Year was one of the nine major Korean festivals that included ancestral rites, according to the Korean historical work, the Goryeosa.[6]

After the liberation of Korea in 1945, the South Korean government designated the period from January 1 to January 3 of the Gregorian calendar as a public new year holiday.

In 1980s, the opinion that the old New Year should be designated as a holiday and respect its tradition was raised, and the government declared the first day of the Korean calendar as a folk day from 1985 to 1988.

In 1989, the Roh Tae-woo administration accepted public opinion that the old New Year's Day should be re-vitalized, designating the old New Year as both the official Korean New Year and a national holiday.[10][verification needed] 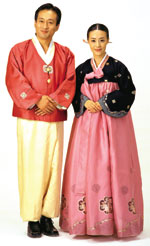 The Korean New Year is typically a family holiday.[3] The three-day holiday is used by many to return to their hometowns to visit their parents and other relatives, where they perform an ancestral ritual called charye. The three days are the day of, the day before, and the day after.[3] In 2016, 36 million South Koreans reportedly would be traveling to visit their families during the Korean New Year.[12] Koreans not only travel within the country, but around the world, as well. Many Koreans travel from overseas to visit their families for this annual holiday. Since it is one of the few times families may be able to get together and catch up on one another's lives, it is considered respectful and important to attend the holiday. Often, the family members first visit the elders, and this includes the grandparents and the parents. It is also considered respectful for people to visit their mothers- and fathers-in-law during the Korean New Year.[13]

Including travel expense, preparation for this holiday is very costly. Gifts are usually given to family members and new clothes are worn during the holiday. Traditional food is prepared for many family members coming to visit for the holiday. Fruits are especially expensive. Due to the increased demand, food prices are inflated during the month of Seollal. As a result, some people have chosen to forgo some traditions because they have become too expensive. These families prepare a modest ancestral rite only with necessary foods for Seollal. The government has started taking certain measures to help stabilize and support ordinary people's livelihood for the New Year holiday period, raising the supply of agricultural, fishery, and livestock products. The government has also used rice reserves and pork imports to lower inflation. The government is also putting money into small and medium-sized companies to help with cash flow.[citation needed]

Many preparations go into celebrating the Korean New Year. During the first morning, Koreans pay their respect towards their ancestors. Traditional foods are placed on a table as an offering to the ancestors, and a rite begins with deep bows from all family members. This is a sign of respect and a very important practice on the first day of the New Year in Korea. It is also where they pray for the well-being of all the family members.[3] Many Koreans dress up in colourful traditional Korean clothing called hanbok, usually worn for special occasions such as weddings, Korean New Year, child's first birthday, amongst others.[3] However, with modernization and evolving mores in the culture, more people tend to prefer westernized, modern clothing to the hanbok. After the rite, the members have a big feast.

Additionally, Koreans follow a zodiac similar to the Chinese zodiac. 12 animals represent the 12 years in sequential order with the rat/mouse representing the first year. Buddha is believed to have invited animals from all over the world to visit, to which only 12 visited. In return, he honoured them by naming the years in the order that they arrived.[14] Koreans believe that specific zodiac animals bring specific resources and qualities. For example, the year 2014 was the year of the horse, and it was considered a good year in the money and career aspect of life. It is said that a person born in a specific zodiacal year will carry that zodiac animal's characteristics. As a result, Koreans plan their year and activities around it to have a good, prosperous year. Parents may have even planned the birth year of their child, so the child may have a specific characteristic.[14]

Another custom observed is the lighting of a "moon house" built from burnable firewood and branches. This symbolizes the warding off of bad/evil spirits for the new year. Many also choose to add wishes they want to come true in the next year to the moon house.

Sebae (Korean: 세배; Hanja: 歲拜; lit. "worship elders") is a ritual of filial piety that is traditionally observed on Seollal. Dressed in traditional clothing, people wish their elders (grandparents, parents and aunts and uncles) a happy new year by performing a deep traditional bow (rites with more than one bow involved are usually for the deceased) and saying the words 'saehae bok mani badeuseyo' (새해 복 많이 받으세요, "Please receive a lot of good fortune for the New Year".) Elders typically reward this gesture by giving children new year's money, or "pocket money" called Sebaet Don (usually in the form of crisp paper money) in silk bags made with beautiful traditional designs, as well as offering words of wisdom (dŏkdam). Historically, parents gave out rice cakes (ddeok) and fruit to their children.

Tteokguk (soup with sliced rice cakes) is a traditional Korean food that is customarily eaten for the New Year. According to Korean age reckoning, the Korean New Year is similar to a birthday for Koreans, and eating tteokguk is part of the birthday celebration. Once a person has finished eating their tteokguk, they are one year older.

On New Year's day, people prepare a lot of food and spend much of the day with family. The rice cake in the tteokguk looks like a coin, and many people eat a lot of rice cakes in the hopes of becoming rich in the new year.

Jeon, sometimes called buchimgae, is a traditional Korean dish especially eaten on the Korean New Year's Day. A savory pancake, it is ripped apart with chopsticks, instead of being sliced with a knife, in the belief of making it taste better.

Other foods commonly prepared are mandu-guk, ddeok, galbi-jjim, and japchae.[15]

Many traditional games are associated with the Korean New Year. The traditional family board game yutnori remains a popular game, especially during Korean New Year. It is played using a set of specially designed sticks and is considered appropriate for all ages and genders. Men and boys traditionally would also fly rectangle kites called Yeon (연, see yeonnalligi), and also play jegichagi, a game in which a light object is wrapped in paper or cloth, and then kicked in a footbag-like manner. Korean women and girls would have traditionally played neolttwigi, a game of jumping on a seesaw (시소), and gongginori, a game played with five little gonggi (originally a little stone, but today many buy manufactured gongi in toy shops). Top (paengi (팽이) spinning is also a traditional game played by children. Recently, a few adults play Go-Stop instead of traditional hwatu.