Composed of one color Black-and-white monochrome: the Eiffel Tower during the 1889 Exposition Universelle

A Philips branded digital audio player with a monochrome display with green backlit, common on older such devices including mobile phones and handheld game systems

A monochrome[1] or monochromatic image, object or palette is composed of one color (or values of one color).[2] Images using only shades of grey are called grayscale (typically digital) or black-and-white (typically analog). In physics, monochromatic light refers to electromagnetic radiation that contains a narrow band of wavelengths, which is a distinct concept.

Of an image, the term monochrome is usually taken to mean the same as black and white or, more likely, grayscale, but may also be used to refer to other combinations containing only tones of a single color, such as green-and-white or green-and-red. It may also refer to sepia displaying tones from light tan to dark brown or cyanotype ("blueprint") images, and early photographic methods such as daguerreotypes, ambrotypes, and tintypes, each of which may be used to produce a monochromatic image.

In computing, monochrome has two meanings:

A monochrome computer display is able to display only a single color, often green, amber, red or white, and often also shades of that color.

In film photography, monochrome is typically the use of black-and-white film. Originally, all photography was done in monochrome. Although color photography was possible even in the late 19th century, easily used color films, such as Kodachrome, were not available until the mid-1930s.

In digital photography, monochrome is the capture of only shades of black by the sensor, or by post-processing a color image to present only the perceived brightness by combining the values of multiple channels (usually red, blue, and green). The weighting of individual channels may be selected to achieve a desired artistic effect; if only the red channel is selected by the weighting then the effect will be similar to that of using a red filter on panchromatic film. If the red channel is eliminated and the green and blue combined then the effect will be similar to that of orthochromatic film or the use of a cyan filter on panchromatic film. The selection of weighting thus allows a wide range of artistic expression in the final monochromatic image.

For production of an anaglyph image the original color stereogram source may first be reduced to monochrome in order to simplify the rendering of the image. This is sometimes required in cases where a color image would render in a confusing manner given the colors and patterns present in the source image and the selection filters used (typically red and its complement, cyan).[3] 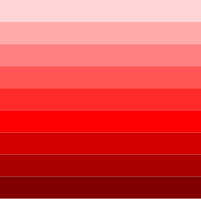 Example of a monochromatic color scheme Monochromatic color schemes provide opportunities in art and visual communications design as they allow for a greater range of contrasting tones that can be used to attract attention, create focus and support legibility.

The use of a monochromatic color provides a strong sense of visual cohesion and can help support communication objectives through the use of connotative color. The relative absence of hue contrast can be offset by variations in tone and the addition of texture.[4]

Monochromatic in science means consisting of a single wavelength of light or other radiation (lasers, for example, usually produce monochromatic light), or having or appearing to have only one color (in comparison to polychromatic). That means according to science the true monochromatic images can be strictly created only of shades of one color fading to black.[5]

However, monochromatic also has another meaning similar to “boring” or “colorless” which sometimes leads to creating a design composed from true monochromatic color shades (one hue fading to black), and the colors created from the one hue but faded to all wavelengths (to white). This is not monochromatic in the strictly scientific meaning of the word. In fact, monochrome in the art world can be as complicated or even more complicated than other polychromatic art.[6]

Look up monochrome in Wiktionary, the free dictionary.