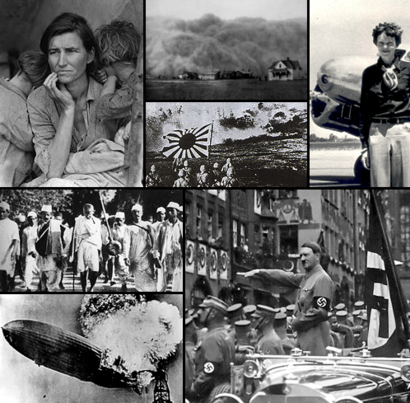 From left, clockwise: Dorothea Lange's photo of the homeless Florence Thompson shows the effects of the Great Depression; due to extreme drought conditions, farms across the south-central United States become dry and the Dust Bowl spreads; The Empire of Japan invades China, which eventually leads to the Second Sino-Japanese War. In 1937, Japanese soldiers massacre civilians in Nanking; aviator Amelia Earhart becomes an American flight icon; German dictator Adolf Hitler and the Nazi Party attempt to establish a New Order of German hegemony in Europe, which culminates in 1939 when Germany invades Poland, leading to the outbreak of World War II. The Nazis also persecute Jews in Germany, specifically with Kristallnacht in 1938; the Hindenburg explodes over a small New Jersey airfield, causing 36 deaths and effectively ending commercial airship travel; Mohandas Gandhi walks to the Arabian Sea in the Salt March of 1930.

The decade was defined by a global economic and political crisis that culminated in the Second World War. It saw the collapse of the international financial system, beginning with the Wall Street Crash of 1929, the largest stock market crash in American history. The subsequent economic downfall, called the Great Depression, had traumatic social effects worldwide, leading to widespread poverty and unemployment, especially in the economic superpower of the United States and in Germany, which was already struggling with the payment of reparations for the First World War. The Dust Bowl in the United States (which led to the nickname the "Dirty Thirties") exacerbated the scarcity of wealth. U.S. President Franklin D. Roosevelt, elected in 1933, introduced a program of broad-scale social reforms and stimulus plans called the New Deal in response to the crisis.

In the wake of the Depression, the decade also saw the rapid retreat of liberal democracy as authoritarian regimes emerged in countries across Europe and South America, including Italy, Spain, and in particular Nazi Germany. With the rise of Adolf Hitler, Germany undertook a series of annexations and aggressions against neighboring territories in Central Europe, and imposed a series of laws which discriminated against Jews and other ethnic minorities. Weaker states such as Ethiopia, China, and Poland were invaded by expansionist world powers, with the last of these attacks leading to the outbreak of World War II on September 1, 1939, despite calls from the League of Nations for worldwide peace. World War II helped end the Great Depression when governments spent money for the war effort. The 1930s also saw many important developments in science and a proliferation of new technologies, especially in the fields of intercontinental aviation, radio, and film.

At the outbreak of World War II, both Nazi Germany and the Soviet Union invaded Poland; by October 1939, they had divided the occupied territory between them in accordance with the secret part of the Molotov–Ribbentrop Pact. German dictator Adolf Hitler (right) and Italian dictator Benito Mussolini (left) pursue agendas of territorial expansion for their countries in the 1930s, eventually leading to the outbreak of World War II in 1939 Mohandas Gandhi on the Salt March in 1930 A dust storm approaches Stratford, Texas, in 1935, during the Dust Bowl Alexander I of Yugoslavia Many technological advances occurred in the 1930s, including:

The discovery of the dwarf planet Pluto

On October 30, 1938 Orson Welles' radio adaptation of The War of the Worlds is broadcast, causing panic in various parts of the United States

The most characteristic North American fashion trend from the 1930s to 1945 was attention at the shoulder, with butterfly sleeves and banjo sleeves, and exaggerated shoulder pads for both men and women by the 1940s. The period also saw the first widespread use of man-made fibers, especially rayon for dresses and viscose for linings and lingerie, and synthetic nylon stockings. The zipper became widely used. These essentially U.S. developments were echoed, in varying degrees, in Britain and Europe. Suntans (called at the time "sunburns") became fashionable in the early 1930s, along with travel to the resorts along the Mediterranean, in the Bahamas, and on the east coast of Florida where one can acquire a tan, leading to new categories of clothes: white dinner jackets for men and beach pajamas, halter tops, and bare midriffs for women.[13]

Revolutionary designer and couturier Madeleine Vionnet gained popularity for her bias-cut technique, which clung, draped, and embraced the curves of the natural female body. Fashion trendsetters in the period included The Prince of Wales (King Edward VIII from January 1936 until his abdication that December) and his companion Wallis Simpson (the Duke and Duchess of Windsor from their marriage in June 1937), socialites like Nicolas de Gunzburg, Daisy Fellowes and Mona von Bismarck, and Hollywood movie stars such as Fred Astaire, Carole Lombard, and Joan Crawford. Social realism became an important art movement during the Great Depression in the United States in the 1930s. Social realism generally portrayed imagery with socio-political meaning. Other related American artistic movements of the 1930s were American scene painting and Regionalism which were generally depictions of rural America, and historical images drawn from American history. Precisionism with its depictions of industrial America was also a popular art movement during the 1930s in the USA. During the Great Depression the art of photography played an important role in the Social Realist movement. The work of Dorothea Lange, Walker Evans, Margaret Bourke-White, Lewis Hine, Edward Steichen, Gordon Parks, Arthur Rothstein, Marion Post Wolcott, Doris Ulmann, Berenice Abbott, Aaron Siskind, Russell Lee, Ben Shahn (as a photographer) among several others were particularly influential.

The Works Progress Administration part of the Roosevelt Administration's New Deal sponsored the Federal Art Project, the Public Works of Art Project, and the Section of Painting and Sculpture which employed many American artists and helped them to make a living during the Great Depression.

Mexican muralism was a Mexican art movement that took place primarily in the 1930s. The movement stands out historically because of its political undertones, the majority of which of a Marxist nature, or related to a social and political situation of post-revolutionary Mexico. Also in Latin America Symbolism and Magic Realism were important movements.

In Europe during the 1930s and the Great Depression, Surrealism, late Cubism, the Bauhaus, De Stijl, Dada, German Expressionism, Symbolist and modernist painting in various guises characterized the art scene in Paris and elsewhere. Prominent criminals of the Great Depression: