Act of spanking another person for sexual arousal or gratification 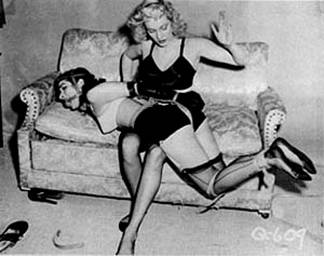 Early sex manuals such as the Indian Kama Sutra (circa 400 BC), Indian Koka Shastra (ca. 1150 AD) and Arabic The Perfumed Garden (ca. 1400 AD) have among their recommendations the use of spanking to enhance sexual arousal.[3]

Interest in sexual gratification received from giving, receiving and witnessing spanking began to increase during the 19th century (particularly within France and the United Kingdom). Interest was not only confined to spanking literature, but the development of photography during 19th century resulted in the beginning of the creation of spanking photography. In the context of literature, this growing demand caused the publication of numerous limited edition spanking novels (although, while the term novel is/was used many of these works from this time and subsequently can be instead classified as novellas). Of the many French works from the "Golden Age" few at the time were translated into other languages within which spanking literature was popular, namely English and German, but beginning during the mid-1960s a number of these French works were translated into English and published, along with these works being republished in French and older British works also being republished. The occurrence of this was facilitated by the availability of mass-produced paperbacks and changes in censorship laws.

For safety, during a spanking, particularly with spanking implements, care should be taken to avoid striking the tailbone and hipbones. A spank skirt or spanking skirt is a skirt that has an additional opening in back designed to expose the buttocks. While the name spank skirt suggests the intention that the wearer be spanked "bare bottom" without removing or repositioning the skirt, this item may be worn for reasons other than spanking (for instance, exposure).[citation needed] Considered fetish wear, these kind of skirts are typically tight-fitting and made of fetishistic materials (such as leather, PVC or latex). Regardless of the gender of the wearer, spank skirts are usually considered female attire. The male gender role equivalent might be motorcycle chaps (a.k.a. "assless chaps").

A scientific survey of 152 people who claimed to practice sadomasochism - of which spanking is a subset - categorised the origin of such interest to be either extrinsic (i.e. the interest originating from a source external to the person) or intrinsic (i.e. emerged naturally). 22% of those surveyed reported origins that were categorised by researchers as extrinsic, such as parental discipline or being introduced to sadomasochism in adulthood by another. In contrast, 78% reported intrinsically having such an interest. Most commonly an intrinsic interest was reported to have emerged in either childhood or adolescence (though at such age the interest was not necessarily sexualised); a small sub-group reported that only in adulthood did they accept or acknowledge what they now recognise to be an intrinsic interest. The majority of those that reported an intrinsic interest were unable to explain the origin of such interest.[6]

From the same scientific survey as above, a third of testimonies reported enjoying receiving pain as to why they practiced sadomasochism; researchers noted that practitioners commonly stressed the difference between "bad" and "good" pain. Interpersonal power (either through giving or exchanging power) was also a commonly reported reason as to why people practice sadomasochism, and researchers noted that this taking place with a trusted partner was a recurring specified need.[6]