Kotor (Montenegrin Cyrillic: Котор, pronounced [kɔ̌tɔr]; Italian: Cattaro) is a coastal town in Montenegro. It is located in a secluded part of the Bay of Kotor. The city has a population of 13,510 and is the administrative center of Kotor Municipality.

The old Mediterranean port of Kotor is surrounded by fortifications built during the Venetian period. It is located on the Bay of Kotor (Boka Kotorska), one of the most indented parts of the Adriatic Sea. Some have called it the southernmost fjord in Europe, but it is a ria, a submerged river canyon. Together with the nearly overhanging limestone cliffs of Orjen and Lovćen, Kotor and its surrounding area form an impressive landscape.

Since the early 2000s Kotor has seen an increase in tourists,[1] many of them coming by cruise ship. Visitors are attracted by the natural environment of the Gulf of Kotor and by the old town of Kotor. Kotor is part of the World Heritage Site dubbed the Natural and Culturo-Historical Region of Kotor.

Entrance of old town Kotor with post-World War II sign "What belongs to others we don't want, ours we don't give."

Once populated by the Illyrians, the exact time of foundation of the first settlement is not known. According to some sources, the oldest settled area dates two millennia back.

The town, first mentioned in 168 BC, was settled during Ancient Roman times, when it was known as Acruvium, Ascrivium, or Ascruvium (Ancient Greek: Ἀσκρήβιον) and was part of the Roman province of Dalmatia.[3]

In 1002, the city suffered damage under the occupation of the First Bulgarian Empire,[citation needed] and in the following year it was ceded to Duklja by the Bulgarian Tsar Samuil.[citation needed] Duklja, or Dioclea, was a vassal duchy of Byzantium at the time. The local population resisted the pact and, taking advantage of its alliance with Dubrovnik, maintained its high autonomy. During this time, the small romanised Illyrian population of Kotor was slowly assimilated by a significant Slav population coming from neighboring areas. Duklja, the biggest Serb duchy at the time, gradually became more powerful under Vojislavljević dynasty and eventually independent from Byzantium in 1042. The city remained autonomous up until Duklja was once again subdued by Byzantium in 1143.[citation needed]

The city was conquered in 1185 by Stefan Nemanja, the ruler of the Grand Principality of Serbia and founder of the Nemanjić dynasty. At that time Kotor was already an episcopal see subordinated to the archbishopric of Bari, and in 13th century, Dominican and Franciscan monasteries were established to check the spread of Bogomilism.[citation needed] Under the rule of the Nemanjić Kotor became a partially autonomous city, enjoying many privileges and maintaining its republican institutions. This is backed by a statute from 1301, which demonstrates that Kotor had the status of a city under Serbian rule. In the 14th century the commerce of Cattaro, as named in Latin scripts (in Serbian Котор, град краљев/Kotor, city of the King), rivaled that of Republic of Ragusa, and caused the Republic of Venice to be envious. Kotor remained the most important trading port of subsequent Serb states – Kingdom of Serbia and Serbian Empire, up to its downfall in 1371.[citation needed]

Four centuries of Venetian domination have given the city the typical Venetian architecture, that contributes to make Kotor a UNESCO world heritage site.[4]

In the 14th and 15th centuries, there was an influx of settlers from the oblasts of Trebinje (the region around forts Klobuk Ledenica and Rudina) and the Hum lands (Gacko and Dabar) to Kotor.[5] The Italian name of the city is Càttaro. Under Venetian rule, Kotor was besieged by the Ottoman Empire in 1538 and 1657, endured the plague in 1572, and was nearly destroyed by earthquakes in 1563 and 1667. 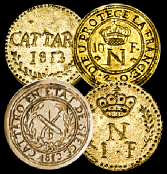 Napoleonic coins were minted in 1813 in Kotor

After the Treaty of Campo Formio in 1797, it passed to the Habsburg monarchy. However, in 1805, it was assigned to the French Empire's client state, the Napoleonic Kingdom of Italy, by the Treaty of Pressburg, although in fact held by a Russian squadron under Dmitry Senyavin. After the Russians retreated, Kotor was united in 1806 with this Kingdom of Italy and then in 1810 with the French Empire's Illyrian Provinces. Kotor was captured by the British in an attack on the Bay led by Commodore John Harper in the brig sloop HMS Saracen (18 guns). To seal off Kotor, residents along the shore literally pulled the ship in windless conditions with ropes. The Saracen's crew later hauled naval 18-pounder guns above Fort St. John, the fortress near Kotor, and were reinforced by Captain William Hoste with his ship HMS Bacchante (38 guns). The French garrison had no alternative but to surrender, which it did on 5 January 1814.

It was restored to the Habsburg monarchy by the Congress of Vienna. Until 1918, the town, then known as Cattaro, was head of the district of the same name, one of the 13 Bezirkshauptmannschaften in the Kingdom of Dalmatia.[6]

During World War I, Cattaro was one of three main bases of the Austro-Hungarian Navy, the home port of the Austrian Fifth Fleet, consisting of pre-dreadnought battleships and light cruisers, and a base for Austrian and German submarines.[citation needed]

The area was the site of some of the fiercest battles between local Montenegrins and Austria-Hungary. After 1918, the city became a part of Yugoslavia and officially became known as Kotor.

Between 1941 and 1943 the Kingdom of Italy annexed the area of Kotor which became one of three provinces of the Italian Governorate of Dalmatia – the Province of Cattaro[7] had an area (subdivided in 15 "Comuni") of 547 km2 and a population of 39,800 inhabitants. Most of the city's inhabitants were Orthodox (with some Roman Catholics). After the war the remaining members of Dalmatian Italians of Kotor (300 inhabitants) left Yugoslavia towards Italy (Istrian-Dalmatian exodus).[8]

View of Kotor from Castle Of San Giovanni.

Kotor has one of the best preserved medieval old towns in the Adriatic and is a double Unesco World Heritage Site: it is part of Natural and Culturo-Historical Region of Kotor and Venetian Works of Defence between the 16th and 17th centuries: Stato da Terra – western Stato da Mar.[4]

It is home to numerous sights, such as the Cathedral of Saint Tryphon in the old town (built in 1166), and the ancient walls which stretch for 4.5 km (3 mi) directly above the city. Sveti Đorđe and Gospa od Škrpijela islets off the coast of Perast are also among the tourism destinations in the vicinity of Kotor. Kotor hosts several summer events, such as the Summer Carnival or Bokeljska Noć. Together with Budva, and the small town of Tuzi, near Podgorica, the city hosted the Federation of European Carnival Cities (FECC) World Carnival City Congress in May 2009.

Kotor Festival of Theatre for Children is one of the most important festivals of its kind in Southeast Europe.[9] Thirty years of this manifestation have marked performances by artists from over 30 countries, from 5 different continents. It was founded in 1993, not far from the place where the first play for children in the Balkans was performed in 1829. The 2017/18 festival was awarded the EFFE Label by the EFA (European Festivals Association).[10] Kotor Festival is highly regarded in the local community and has a large volunteer base.

Kotor has a large population of cats that have become a symbol of the city.[11] The city has several cat stores and a cat museum, as well as the Cats' Square (Trg od mačaka).[12] Water and food is left throughout the city for the cats to feed on, and cardboard boxes are often arranged to be a place for the cats to sleep in.[13] Tourists may notice cats in poor health, which may be due to malnutrition, lack of shelter, fighting, or illness (often a common viral respiratory condition for which medicine is unavailable).[14] The charity Kotor Kitties [15] exists to try and help the cats of Kotor through spaying and neutering. Kotor is described evocatively at the beginning of Marguerite Yourcenar's story 'Marko's Smile.'

Kotor is the administrative centre of Kotor municipality, which includes the towns of Risan and Perast, as well as many small hamlets around the Bay of Kotor, and has a population of 22,601.[16]

The town of Kotor itself has 961 inhabitants, but the administrative limits of the town encompass only the area of the Old Town. The urban area of Kotor also includes Dobrota (8,819) and Škaljari (3,807), bringing the population of Kotor's urban area close to 13,000 inhabitants. The total number rises to around 15,000 if the neighbouring hamlets of Muo, Prčanj and Stoliv are included. The entire population of Kotor Municipality was 22,947, as of the 2003 census.

Ethnic composition of the municipality in 2011:[16]

Until the 19th century the main language of Kotor was Italian.[17] During the 19th century, the use of Italian began to decline in favour of Serbian. In 1890, the 18.7% of the population was Italian. The majority of the Italian minority left the city for Italy after the Treaty of Rapallo (1920). The remaining Italians were assimilated or left Kotor after 1945. Today, only 31 people in Kotor identify as ethnic Italians.[18][19] According to documents from 1900, Kotor had 7,617 Catholics, and 7,207 Orthodox Christians. Kotor is still the seat of the Catholic Bishopric of Kotor, which covers the entire gulf. In 2011, 78% citizens of Kotor were Orthodox Christians, while 12% were listed as Roman Catholic.

The local football team is FK Bokelj, who have spent several seasons in the country's top and second tiers. They play their home games at the Stadion pod Vrmcem.

Kotor is a national powerhouse of water polo, which is a popular sport in Montenegro. The team of Primorac Kotor won the LEN Champions League in 2009. Another club from Kotor, VA Cattaro, won the 2010 edition of the LEN Euro Cup.

Kotor is connected to the Adriatic Highway and the rest of the coast and inland Montenegro by Vrmac Tunnel. Inland is reachable by detouring from Adriatic highway at Budva or Sutomore (through Sozina tunnel). There is also a historic road connecting Kotor with Cetinje, which has views of Kotor bay.

Tivat Airport is 5 kilometres (3.1 mi) away, and there are regular flights to Belgrade, Moscow, Paris and London. Dozens of charter planes land daily on Tivat airport during the summer season.

Podgorica Airport is 65 kilometres (40 mi) away, and it has regular flights to major European destinations throughout the year.

Wikivoyage has a travel guide for Kotor.

Wikisource has the text of the 1921 Collier's Encyclopedia article Cattaro.

Wikisource has the text of the 1911 Encyclopædia Britannica article "Cattaro".