Mercy Graves is a supervillain appearing in multimedia and American comic books published by DC Entertainment and DC Comics. Created for the DC Animated Universe (DCAU), she first appeared in 1996 on Superman: The Animated Series as the personal assistant and bodyguard of Superman’s archenemy Lex Luthor, returning in Justice League and Justice League Unlimited.[1] She has since crossed over into comic books published by DC Comics and has generally retained that role. The character was then played by Tao Okamoto in the 2016 DC Extended Universe (DCEU) film Batman v Superman: Dawn of Justice,[2] by Cassidy Freeman in Smallville (as Tess Mercer), by Rhona Mitra in the fourth season of the television series Supergirl, by Natalie Gumede in the second season of the DC Universe series Titans, and by Maya Erskine in DC League of Super-Pets. 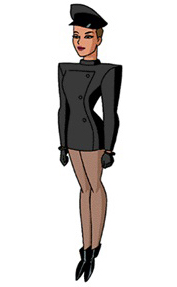 Mercy Graves was created for Superman: The Animated Series (voiced by Lisa Edelstein) as a tough young woman with a checkered past. Mercy serves as Lex Luthor's personal bodyguard and chauffeur. Originally the leader of a gang of female thieves, Mercy once daringly swiped Luthor's briefcase from under the billionaire's nose. She did not get far before Luthor's men hunted her down. However, rather than take revenge, Luthor, impressed by her mixture of ruthlessness and street savvy, offered her a job. He took her in, cleaned her up, and made her his right-hand woman. Trained in unarmed combat, she was entrusted with his personal security and also to carry out his dirty work.

Her demeanor reveals a sardonic wit and her habitual dress is a chauffeur's uniform with a very short skirt, a chauffeur's cap, nylons, and short, high heeled boots. Mercy is loyal and respectful to Luthor, and she claims to be "the only one in Luthor's entire company who can get away with calling him Lex".

In the episode "Brave New Metropolis" Lois Lane travels to an alternate reality of Metropolis. Mercy Graves is the commander of Lex Luthor's law-enforcement group. She and her soldiers raid the hideout of the revolutionaries led by Jimmy Olsen where they arrest the revolutionaries, confiscate the stolen Kryptonite, send the adults to prison, and send any children of the revolutionaries to the LexCorp Orphanage. When she hears Jimmy call out to Lois, Mercy had her brought before Lex Luthor after the DNA tests prove that she is Lois Lane. Lex Luthor decided that in order to keep Superman at bay, it would be best to dispose of Lois. He sent Mercy to kill her in the city. On their way, they came across Angela Chen, who managed to distract the commander. Lois stole Mercy's gun and before she could react, Angela had bitten her leg. Lois made her getaway. Lois and the alternate Superman met where he learned what Lex Luthor has been doing behind his back. In the LexCorp building, Mercy was present when Lois and Superman confronted Luthor. Mercy fought Lois, but ultimately lost when Lois planted a jaw-breaking left hook. Rebels stormed into the room and poured onto the hated Mercy while Superman pursued Lex Luthor.

In the episode "Ghost in the Machine", Mercy teams up with Superman to find a missing Lex Luthor. Superman tries to convince Mercy that Luthor does not actually care for her, but Mercy tries to prove him wrong. After a battle with Brainiac, Mercy is pinned under a pile of fallen machinery while the room was effected by a strong vacuum. Although Luthor could have saved her, he flees instead causing Superman to save her.

During the "World's Finest" crossover arc, Mercy develops an intense rivalry with Harley Quinn, the Joker's henchwoman and on again/off again girlfriend as Joker himself forms a tenuous alliance with her boss to kill Superman. During the arc's climactic episode, Harley and Joker gag her and Lex and tie them to a killer android that attacks Batman and Superman. She and Lex are saved by the two, and is later seen watching television and laughing to herself as Harley is publicly arrested.

Mercy Graves later reappears in the Justice League episode "Tabula Rasa". The nature of her relationship with Luthor becomes more clear. Mercy has agreed to take over LexCorp while Luthor is in prison and is hesitant to return it to him because she feels their former relationship was not an equal one. She also states that while she was the CEO of LexCorp, she brought the stock up 38% and removed certain departments in the science division finding them useless or in order to save money. Lex Luthor exacerbates the situation by verbally and physically abusing her. It is repeatedly implied that their relationship was not solely platonic. Mercy grudgingly assists Luthor's escape from the Justice League, but his deceitful manipulation of another devoted servant causes Mercy to see their years together in a different light. After his capture, Mercy hangs up on Lex Luthor during his single phone call when he requests help in obtaining a lawyer and doctors to treat his Kryptonite-caused cancer.

Mercy Graves reappears in the Justice League Unlimited episode "Clash". She was seen at Lex Luthor's side again.

Mercy Graves first appeared in the main DC Universe continuity in Detective Comics #735 (August 1999), during the No Man's Land storyline in the Batman titles. This version of Mercy has blonde hair and does not wear a chauffeur's uniform. She is sometimes seen wearing a suit and tie. She is later joined by another female bodyguard in Luthor's employ, Hope. It is suggested that the two may be Amazons, as they have exchanged blows with Superman. This possibility is referenced in the President Luthor: Secret Files and Origins comic when the sorceress Circe appears at the White House demanding to meet with Lex. Hope and Mercy inform Circe that they can always recognize her, no matter what disguise or form she might take, suggesting some previous familiarity. After temporarily changing them into birds Circe tells Lex that he will need to hire new Amazon bodyguards.

Although Hope's time as a LexCorp employee has passed, Mercy can be seen with the fugitive Lex Luthor after he is driven from the Presidency. Despite her loyalty to Luthor, she has still shown some humanity even while in his employ; when Superman was searching for Lois Lane after she was abducted and impersonated by the Parasite, Mercy saw him during his search, and, in that moment, saw him not as an alien, but as a man who had lost everything. A Mercy-Harley Quinn fight is featured in Action Comics #765 (May 2000).

In the series 52, Mercy is seen alongside Luthor at the unveiling of his "Be Your Own Hero" program, and is injured when she fires several gunshots at Steel, which he deflects and sends back at her, hitting her in the right hand. She is later shown in Luthor's employ in 52 Week 40.

Mercy has appeared in the Infinity, Inc. series, apparently wanting to atone for her past deeds. In #8, she takes on the moniker "Vanilla" and wears a costume equipped with a special mask that will keep her identity hidden from the likes of Superman and Lex Luthor. In #10, she almost beats a man to death. She leaves the team soon after, accepting the fact that she is not "hero" material.

Mercy's Amazon heritage is confirmed in Justice League: Cry for Justice, when the supervillain Prometheus nearly kills Supergirl with god-forged bullets he claimed he bought from Mercy.[3]

In The New 52 (a reboot of DC universe launched in 2011), Mercy Graves is reintroduced as an Asian American. She works as Lex Luthor's personal assistant and manages LexCorp during his absence.[4]