Texarkana is a city in Bowie County, Texas, United States, in the Ark-La-Tex region. Located approximately 180 miles (290 km) from Dallas, Texarkana is a twin city with neighboring Texarkana, Arkansas. The Texas city's population was 36,193 at the 2020 census.[4]

The city and its Arkansas counterpart form the core of the Texarkana Metropolitan Statistical Area, encompassing all of Bowie County, Texas, and Miller County, Arkansas. The two cities had a combined population of 65,580 in the 2020 decennial census, and the metropolitan area had a population of 149,482.[5]

Railroads were quick to see the possibilities of connecting markets in this vast area. In the late 1850s, the builders of the Cairo and Fulton Railroad were pushing their line steadily south across Arkansas. By 1874, they crossed the Red River and reached the Texas state line. Between February 16 and March 19, 1874, trains ran between the Texas border and the Red River, whence passengers and freight were ferried north to Fulton, Arkansas to continue by rail. The Red River Bridge opened on March 20, 1874. Since then, trains have run directly from Texarkana to St. Louis, Missouri.

Keen rivalry existed between the 1870s railroad builders. The Texas and Pacific Railroad reached across Texas to the Arkansas state line. The border was the logical place for the different railways to connect. On December 8, 1873, the Texas and Pacific sold the first town lots for the future city. The first buyer was J. W. Davis,[6] who purchased the land where today's Hotel McCartney now stands, opposite Union Station.

The name Texarkana is known to be a portmanteau of Texas, Arkansas, and nearby Louisiana. However, accounts of the name's origin differ, and it had been in use some time before the town was founded. The most popular tradition is that when the St. Louis, Iron Mountain and Southern Railway was building its line through the area, Col. Gus Knobel, a railroad surveyor, coined the name. He is said to have painted it on a plank and nailed it to a tree, saying "This is the name of a town which is to be built here."[7] Another story tells of a Red River steamboat named The Texarkana, c. 1860. A third account relates that a storekeeper named Swindle in Red Land, Louisiana, concocted a drink called "Texarkana Bitters".[8]

Racial discrimination continued after the abolition of slavery in both states. Violent attacks on blacks and lynchings took place, especially in the late 19th and early 20th centuries. Blacks were largely disenfranchised throughout the South from the turn of the century until after passage of federal voting rights legislation in 1965 and enforcement. On May 22, 1922, Hullen Owens, an African-American man, was lynched by a large white mob made up of thousands of people.[9]

In the late winter and spring of 1946, from February 22 to May 3, residents of the two cities were terrorized by violent attacks against four young couples. Five of the eight individuals were killed, in what were called the Texarkana Moonlight Murders. Law enforcement believed the attacks to be the work of a serial killer, but no one was ever prosecuted for these crimes. The attacks took place in both Texarkana, Arkansas, and the twin city area in Texas. 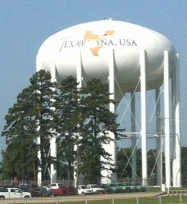 On May 22, 2008, a microburst producing winds up to 100 mph occurred over Stateline Avenue and surrounding communities. An analysis of radar data leading up to the damage showed that two severe thunderstorms came together on the south side of the city. One severe storm was moving northeastward from southern Bowie County, while the other was moving northwestward through Miller County. Both storms collided in an area just south of downtown Texarkana.[citation needed]

According to the city's 2009 Comprehensive Annual Financial Report,[18] the top employers in the city are:

Texarkana is the headquarters of the theologically conservative American Baptist Association, whose Missionary Baptist churches are most numerous in Texas, Arkansas, Louisiana, Oklahoma, and Mississippi.

Though the city was historically Democratic, Texarkana is currently represented by Republicans in both houses of the Texas State Legislature. The state senator is Bryan Hughes from District 1. State Representative Gary VanDeaver represents Texas House District 1.

The Texas Sixth Court of Appeals is located downtown in the Bi-State Justice Building.[22]

At the federal level, the two U.S. senators from Texas are Republicans John Cornyn and Ted Cruz; Texarkana is part of Texas's 4th congressional district, which is currently represented by Republican Pat Fallon.

The Federal Courthouse (which also holds the downtown post office[23]) is located directly on the Arkansas-Texas state line and is the only federal office building to straddle a state line. During his campaign for the presidency, John F. Kennedy spoke on the steps of the courthouse September 13, 1960, and so did President Jimmy Carter, on October 22, 1980.[24]

The Federal Correctional Institution, Texarkana, is a Federal Bureau of Prisons facility in unincorporated Bowie County just outside the southwest border of the city.[25][26] Texarkana Union Station is located in downtown Texarkana along the state line, with Amtrak's Texas Eagle providing daily service east to Chicago and west to San Antonio, continuing on to Los Angeles three days a week, with intermediate points.

Interstate 30 passes through Texarkana on the north. Loop 151 on the west of the city forms part of the Texarkana Loop, a three-quarter loop around the west, south, and east of the twin cities with I-30 completing the loop on the north. Interstate 369 shares the western portion of Loop 151. Interstate 49 is a newly constructed interstate corridor on the Arkansas side of the city which connects Texarkana to Shreveport, Louisiana.

Across the Texarkana TX Arts & Historic District downtown, a colorful array of murals are for viewing. The murals have helped promote local talent and encouraged engagement from the community. Several murals have been used for social media and professional photos.