Private university in Philadelphia, Pennsylvania, US

The university is named for U.S. Founding Father and president Thomas Jefferson.

At the 1876 Centennial Exposition, local textile manufacturers noticed that Philadelphia's textile industry was falling behind its rivals' capacity, technology, and ability. In 1880, they formed the Philadelphia Association of Manufacturers of Textile Fabrics, with Theodore C. Search as its president, to fight for higher tariffs on imported textiles and to educate local textile leaders. Search joined the board of directors of the Philadelphia Museum and School of Industrial Art (now the Philadelphia Museum of Art and the University of the Arts), thinking it the perfect partner for his plans for a school, and began fundraising in 1882.

In early 1884, Search himself taught the first classes of the Philadelphia Textile School to five students at 1336 Spring Garden Street. The school was officially opened on November 5, 1884. The school moved to 1303-1307 Buttonwood Street in 1891, then moved again in 1893.

Enrollment had been growing steadily and the school was turning away "bright young fellows" for lack of space. The School acquired the former Philadelphia Institute of the Deaf and Dumb on the corner of Broad and Spruce Streets, which allowed rapid expansion of academic offerings and capacity of students.

In 1942, the school was granted the right to award baccalaureate degrees and changed its name to the Philadelphia Textile Institute (PTI). In 1949, having decided to break its ties with the museum, PTI moved to its present site in the East Falls section of Philadelphia.

In 1961, the school changed its name again, to Philadelphia College of Textiles & Science, but was still known as Philadelphia Textile for short. The university's student population doubled between 1954 and 1964, and doubled again by 1978, with programs in the arts, sciences, and business administration being introduced. The college purchased an adjoining property in 1972, doubling the size of its campus. In 1976, it offered its first graduate degree, the Master of Business Administration. The purchase of additional properties in East Falls in 1980 and 1988 nearly doubled the campus again, adding classrooms, research laboratories, student residences, and athletic facilities. In 1992, the 54,000-square-foot (5,000 m2) Paul J. Gutman Library opened.

During the 1990s, the college began to offer undergraduate majors in a wider range of fields, resulting in the college being granted university status by the Commonwealth of Pennsylvania in 1999. The Board of Trustees voted to change the college's name to Philadelphia University, on July 13, 1999. The school preferred the longer abbreviation of "PhilaU", rather than the simple two-letter abbreviation of "PU", due to the latter's oft-mocked connection with other "PU"-abbreviated schools as an onomatopoetic term for body odor. 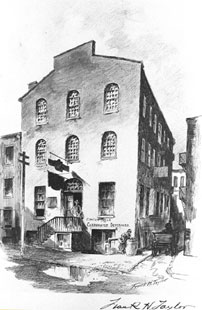 The Tivoli Theater in Philadelphia, first home of the Jefferson Medical College Thomas Eakins' painting The Gross Clinic, housed at Jefferson University from 1876 to 2006

The first class was graduated in 1826, receiving their degrees only after the disposition of a lawsuit seeking to close the school.[12] The first classes were held in the Tivoli Theater on Prune Street in Philadelphia, which had the first medical clinic attached to a medical school.[14] Owing to the teaching philosophy of Dr. McClellan, classes focused on clinical practice.[14] In 1828, the Medical Department moved to the Ely Building, which allowed for a large lecture space and the "Pit," a 700-seat amphitheater to allow students to view surgeries.[14] This building had an attached hospital, the second such medical school/hospital arrangement in the nation, servicing 441 inpatients and 4,659 outpatients in its first year of operation.[14] The future founder of gynecology J. Marion Sims studied there from 1834 to 1835, when he graduated. The relationship with Jefferson College survived until 1838, when the Medical Department received a separate charter, allowing it to operate separately as the Jefferson Medical College.[13][15] At this time, all instructors, including McClellan, were vacated from the school and the trustees hired all new individuals to teach. This has been considered the time at which the school came to be considered a "legitimate" medical school.[10][16]

In 1841, Jefferson Medical College hired what would be dubbed "The Faculty of '41", an influential collection of professors including Charles Delucena Meigs and Mütter Museum founder Thomas Dent Mütter. This collection of professors would institute numerous changes to Jefferson—including providing patient beds over a shop at 10th and Sansom Streets in 1844—and the staff would remain unchanged for 15 years.[17] The graduating class of 1849 included a son of college founder Joel Barlow Sutherland, Charles Sutherland, who went on to serve as Surgeon General of the United States Army.[18] The renowned surgeon and Jefferson Medical College anatomy professor, William S. Forbes, was arrested for his role in the grave robbery but was acquitted[21] Forbes helped write the 1867 Pennsylvania Law named the "Anatomy Act" which called for hospitals, prisons and mental health wards to provide the bodies of those that had no family or funds for burial to medical schools for anatomical research.[19]

Due in part to the Lebanon Cemetery grave robbery scandal, the Pennsylvania Anatomy Act of 1883 was passed which provided for legal means by which medical colleges could obtain cadavers without having to buy them from grave robbers.[21]

A 125-bed hospital, one of the first in the nation affiliated with a medical school, opened in 1877, and a school for nurses began in 1891. The Medical College became Thomas Jefferson University on July 1, 1969. As an academic health care center, Jefferson is currently involved in education, medical research, and patient care. Jefferson Medical College is the 9th oldest American medical school that is in existence today.[22]

In January 2007, the university sold Thomas Eakins' painting The Gross Clinic, which depicts a surgery that took place at the school, for $68 million, to the Pennsylvania Academy of the Fine Arts, in association with the Philadelphia Museum of Art.[23] A reproduction hangs in its place at Jefferson University.

There are two campuses and a research center. The Mansion on the East Falls campus The College and Curtis Buildings on the downtown campus

In addition to its major properties, Jefferson runs the Philadelphia University Research Center, which is housed in a restored textile mill (originally opened in 1864) in the Manayunk section of Philadelphia, just south of the main campus. The research center contains both the Engineering and Design Institute and the Laboratory for Engineered Human Protection.[35]

The merged school chose to retain PhilaU's nickname and the athletic program follows the overall institution in using the branding of "Jefferson" when describing the university as a whole.

The university is known for its men's basketball program, particularly coach Herb Magee, who became the most successful men's basketball coach in NCAA history on February 23, 2010, and was inducted into the Class of 2011 of the Naismith Memorial Basketball Hall of Fame. Magee served 54 years as coach at Philadelphia University, highlighted by an NCAA Division II Basketball Championship in 1970. Magee was awarded the honorary degree of Doctor of Humane Letters by President Stephen Spinelli Jr. at Philadelphia University's 125th Commencement in 2009.[36]

The university women's basketball program is under athletic director and women's basketball coach Tom Shirley. Shirley, who has been the university's director of athletics since 1992, has won 607 games, which places him sixth on the NCAA DII career wins list and 30th on the NCAA all-divisions career coaching wins list. On January 19, 2011, Shirley took his 600th win as the Rams defeated Chestnut Hill College 76–60.

In the 2006–2007 season, Philadelphia University started a rowing program under head coach Chris O'Brien. In its inaugural season it won the Dad Vail Regatta in the Women's Novice Heavy Eight. The 2008–2009 season was also notable for the success of the men's and women's tennis teams, with both winning the CACC championships.[citation needed]

Jefferson Women's Soccer is the first program to win three straight CACC titles in women's soccer since at least the 2000 season, according to available records. Jefferson 's win in 2021 comes after consecutive wins in 2019 and 2020. This marked the Rams' sixth CACC Championship in program history. In 2021, Jefferson also earned its fourth NCAA Tournament appearance (2014, 2015, 2019), and the Rams made back-to-back trips for the second time. There was no NCAA Tournament contested in the 2020-21 academic year due to the COVID-19 pandemic.