The United States Army War College (USAWC) is a U.S. Army educational institution in Carlisle, Pennsylvania, on the 500-acre (2 km2) campus of the historic Carlisle Barracks.[2] It provides graduate-level instruction to senior military officers and civilians to prepare them for senior leadership assignments and responsibilities.[3] Each year, a number of Army colonels and lieutenant colonels are considered by a board for admission.[4][3] Approximately 800 students attend at any one time, half in a two-year-long distance learning program, and the other half in an on-campus, full-time resident program lasting ten months.[3] Upon completion, the college grants its graduates a master's degree in Strategic Studies.[3]

Army applicants must have already completed the U.S. Army Command and General Staff College and the required Joint Professional Military Education for officers in the rank of major. While the Army handpicks most of the students who participate in the residential program, the student body always includes officers from the other military branches, civilians from agencies such as the Department of Defense, State Department, and National Security Agency, and officers from foreign countries who attend the program as International Fellows.

The Army War College is a split-functional institution. While a great deal of emphasis is placed on research, students are also instructed in leadership, strategy, and joint-service/international operations. It is one of the senior service colleges including the Naval War College and the Air War College. Additionally, the U.S. Department of Defense operates the National War College.

According to U.S. Army Regulation 10–87, the Army War College "educates and develops leaders for service at the strategic level while advancing knowledge in the global application of landpower."[5] 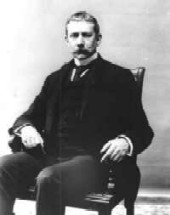 Established from the principles learned in the Spanish–American War, the college was founded by Secretary of War Elihu Root and U.S. President Theodore Roosevelt, and formally established by General Order 155 on 27 November 1901. Washington Barracks—now called Fort Lesley J. McNair—in Washington, D.C. was chosen as the site. Roosevelt attended the Masonic laying of the cornerstone of Roosevelt Hall on 21 February 1903.

The first president of the Army War College was Major General Samuel B. M. Young[6] in July 1902 and the first students attended the college in 1904.

During the presidency of Montgomery M. Macomb in 1916, President Woodrow Wilson accused students and staff of planning for taking part in an offensive war, even though the United States had not entered World War I. Wilson was unconvinced by Macomb's explanation that the college was concerned only with the intellectual growth and professional development of its students, and insisted that the school curtail its activities in order to ensure that the U.S. maintained its neutrality.[7][8]

The college remained at Washington Barracks until the 1940s, when it was closed due to World War II. It reopened in 1950 at Fort Leavenworth, and moved one year later to its present location.

The Basic Strategic Art Program is one of the academic programs taught at the U.S. Army War College. When the program was founded in 2003, its purpose was to provide those officers who had been newly designated into Functional Area 59 (Strategist, formerly Strategic Plans & Policy) an introduction to strategy and to the unique skills, knowledge, and attributes needed as a foundation for their progressive development as army strategists. FA 59 officers have deployed to combat since the onset of the Global War on Terror in 2001. Since then, graduates of this program served in key positions in Iraq, Afghanistan, all combatant commands, and at the Pentagon.

The Peacekeeping and Stability Operations Institute (PKSOI) is located at the War College. The institute's mission is to serve as the U.S. Military's Center of Excellence for Stability and Peace Operations at the strategic and operational levels in order to improve military, civilian agency, international, and multinational capabilities and execution.