A group of Ute people. Utes and other Native Americans were enslaved by Spanish colonialists beginning in the 16th century. They were called Genízaros. After bands of Native Americans, like the Utes and Comanche, obtained horses from the Spanish, they rode horseback into villages of other indigenous people, captured children and adults, and sold them into slavery.

The history of slavery in Colorado began centuries before Colorado achieved statehood when Spanish colonists of Santa Fe de Nuevo México (1598–1848) enslaved Native Americans, called Genízaros. Southern Colorado was part of the Spanish territory until 1848. Comanche and Utes raided villages of other indigenous people and enslaved them.

Colorado was partially delayed from becoming a state due to its requirement for suffrage for African Americans. African American pioneers came to the territory prior to the American Civil War, including James Beckwourth who was an explorer and mountain man beginning in 1822. Charlotte and Dick Green were brought to what is now Colorado by Charles and William Bent and worked at Bent's Fort beginning in 1833. Clara Brown came to the territory in search of her daughter and became a successful businesswoman, investor, and philanthropist. Barney Ford and Edward J. Sanderlin were successful business woman, William Jefferson Hardin was a legislator and mayor of Leadville.

There were some instances of slaves in early 19th century, such as the Green family of Bent's Fort. Former enslaved men and women settled in Colorado, establishing themselves as business people, legislators, and other professions.

In 1877, the state passed a law that made slavery and servitude illegal, except for convicted individuals. In 2018, an Amendment was passed to make slavery, or forced labor, of convicted people illegal.

Louisiana Purchase (1803), that included part of Colorado, and Nuevo México (1598–1848), that also included part of present-day Colorado (as well as Utah, New Mexico, Arizona, and California)

Native Americans—Arapaho, Cheyenne, Utes, and other indigenous people—occupied what is now Colorado for centuries.[1]

Utes and other Native Americans were captured and enslaved by the Spanish colonists of Santa Fe de Nuevo México (1598–1848).[2] The Spanish initiated a "flourishing" slave trade of Native Americans, called Genízaros, who were sold to Hispanics in what is now the American Southwest. In the late 1700s, historians estimate that one-third of the 29,000 people living in New Mexico territory were slaves. Even after the region was acquired by the United States, there were Native American slaves who were held in bondage.[3][a]

Apache, Jumanos, and Kiowa settlements were raided by Utes and Comanche natives on horseback. Children and adults were captured and sold in villages.[3]

Map prior to the founding of Colorado Territory (1861–1876). The outline for Colorado includes parts of the Nebraska Territory, Utah Territory, Kansas Territory, and New Mexico Territory.[b]

Before Colorado Territory was formed, previous territories were formed from the Louisiana Purchase (1803) and subsequent treaties that encompass land of the present-day state of Colorado.[4]

James Beckwourth, circa 1856, was a mountain man and explorer beginning in 1822.

James Beckwourth, born into slavery in 1805 in Virginia, escaped slavery. He came west, including to the Colorado area beginning in 1822. He was part of an expedition to lead mines, was an explorer of the Rocky Mountains, and was a fur trapper and mountain man. He was also a co-founder of El Pueblo.[5][6]

Bent's Fort, established along the Santa Fe Trail in 1833 was visited by Native Americans, Spanish, Europeans, and French. Enslaved people sometimes accompanied the visitors.[7] William Bent had three African American enslaved people, Charlotte and Dick Green and Andrew Green. The men handled maintenance and chores at the fort. Charlotte was the cook and provided entertainment, such as dances and parties. For instance, she held a party for General Stephen Kearny. Living as a free man and a well-respected mountain man, Beckwourth worked for Bent.[8][9] The Greens were brought to the fort by William and Charles Bent from St. Louis. Charles Bent brought Dick Green with him to Santa Fe when he became governor of the New Mexico Territory. When Bent was assassinated, Green volunteered to assist the troops in tracking down the culprits. For his heroism, William Bent set the Greens free.[9]

In 1848, the United States acquired land that would become Colorado after winning the Mexican–American War. At that time, there were few Anglo settlers in Colorado.[1] The first permanent settlement of people of European heritage was established in the San Luis Valley in 1851.[1]

After Utes raided El Pueblo (now known as Pueblo, Colorado in the Massacre of 1854, young Juan Isidro Sandoval was captured by the Utes and sold as a slave. He was enslaved for eight years and then freed in exchange for a Hawken rifle and $300 dollars (equivalent to $8,143 in 2021) in silver.[10]

Colorado Territory (1861–76) was established on February 28, 1861, in response to a large influx of fortune seekers and settlers during the Pike's Peak Gold Rush. Before the American Civil War, there was a clash between Democrats who were pro-slavery and anti-slavery Congressional Republicans, who were able to pass the Colorado Organic Act in mid-February 1861. On August 1, 1876, President Ulysses S. Grant admitted Colorado to the Union.[4]

In the mid-19th century blacks came to Colorado with other fortune seekers during the Pike's Peak Gold Rush and lived in and around Denver, Boulder, Cripple Creek, and Central City, Colorado. A number of black members of the 9th and 10th United States Cavalry, the Buffalo Soldiers, settled in Colorado after they completed their military career.[11]

Clara Brown was born into slavery and had four children with her husband. The family members were separated and after she was freed, Brown headed west in search of one of her daughters. She worked as a cook for a wagon train. She was the first African-American woman to settle in Colorado. She was a successful businesswoman, investor, and philanthropist. After searching for her family for years, and separated from her family for 47 years, she met up with her daughter Eliza, who moved to Denver to live with her.[12] Elijah Wentworth, whose nickname was "Lige", was born into slavery without any knowledge of his family or his early life in Virginia. He was also a cook for a wagon train that was headed for Denver. Wentworth was a singer of verses and a town crier, known for his presence at Union Station.[13] Denver at Cherry Creek and South Platte Rivers, 1859, representing an encampment of Cheyenne and Arapaho and the early settlement of European Americans. See History of Denver.

Barney Ford was an enslaved man from Virginia who ran away using the Underground Railroad, he lived in several places in the United States an in Central America before he settled in Denver. He was a civil rights activist and a successful businessman. He helped freed slaves attain an education.[14]

Samuel and Nancy Lancaster obtained the money to purchase their freedom, called a "liberty free". A pastor in Kansas provided $600 to pay for Nancy's freedom. Samuel worked in mining camps as a barber. He earned $1,200 (equivalent to $26,410 in 2021) to purchase his freedom. The couple lived in a cabin in Denver. Edward J. Sanderlin was born into slavery, became a successful businessman in Denver.[13] John Taylor, born a slave in Kentucky, served during the Civil War and afterwords to fight Native Americans. After he was discharged, he joined a band of Utes and settled in the San Juan Valley.[13]

Henry O. Wagoner, an Underground Railroad conductor before moving to Colorado, promoted civil rights. He paid legal fees for fugitive slaves. William Jefferson Hardin, born free in Kentucky, came to Colorado in 1863. He was the mayor of Leadville, fought for civil rights, and was the first African American elected to the Wyoming Territory Legislative Assembly.[13]

The Emancipation Proclamation was enacted on January 1, 1863, during the American Civil War, but it was not until June 19, 1865, that all enslaved people throughout the country, both Northern and Southern States were emancipated.[13] Although the end of the Civil War did not likely change the perceptions of blacks about themselves or among Southern white people, it gave free blacks the opportunity to settle outside of the south. The "Wild West" was likely not free of racial prejudice, but there did not seem to be the same fear of blacks that existed in the south. This may have been because a lot of the white people in Colorado were foreign-born and there was not a major influx of white Southerners who moved to Colorado after the Civil War.[15] The census of 1860 recorded 46 blacks and ten years later, there were 456 blacks. There was greater fear among whites of Asian Americans and Native Americans. In Colorado, where the number of blacks were relatively small. It was desirable to hire a black person than Asian, Native American, and Italian people. One historian said, "black life in the West varied from other parts of the U.S. in that relatively large Asian and Latino and indigenous populations served as something of a lightning rod deflecting bigotry that traditionally was received in full force by African Americans."[15] 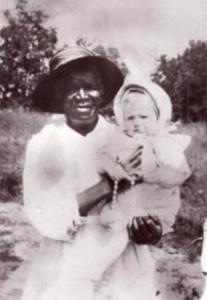 Servant of God Julia Greeley and a child, O.F.S.

Julia Greeley, born enslaved in Missouri, she lost an eye and was disfigured by a whipping. She came to Colorado after she was emancipated. She worked for Julia Dickerson and William Gilpin for at least three years, until their divorce, and she was domestic servant of various types thereafter. Although she did not have much money herself, she provided food and clothing for the poor, tended to children and spread the Catholic faith. An icon of Julia—with a child, mountains of Colorado, Sacred Heart, Franciscan coat of arms, and other relevant images—was commissioned by the Archdiocese.[16]

On November 15, 1865, the Zion Baptist Church was founded. Its members, who "played sterling roles" throughout the city and beyond, included former enslaved people, activists, teachers, doctors, preachers, politicians and more.[17]

Colorado Territory was seeking statehood during the American Civil War, one of the key issues was suffrage for African Americans. In 1867, President Andrew Johnson rejected the bill for statehood that gave blacks the right to vote.[13] In 1877, Colorado officially banned servitude and slavery, except as a punishment for convicted criminals.[18] In 2018, Colorado Amendment A was passed which abolished slavery entirely. It made it illegal to make convicted criminals subject to forced labor. The wording for the bill is based upon the Thirteenth Amendment to the United States Constitution. The state constitution now reads, "There shall never be in this state either slavery or involuntary servitude."[18] The law now prevents people who were former enslaved people from being arrested and forced into "involuntary servitude", also known as "convict leasing".[18]

Juneteenth, which began to be celebrated in Denver in the 1950s, commemorates emancipation of African Americans and focuses on education and achievement. By the 1980s, it was one of the country's largest Juneteenth celebrations. In 2012, Juneteenth Music Festival LLC was organized to reinvigorate the festival which had been in decline since the early 1990s. It supports "redevelopment and elimination of financial blight in Denver, Colorado’s Historic Five Points Neighborhood."[19]