Prefecture and commune in Île-de-France, France

listen)) is a commune in the Seine-et-Marne department in the Île-de-France region, north-central France. It is located in the southeastern suburbs of Paris about 41 kilometres (25+1⁄2 miles) from the centre of Paris. Melun is the prefecture of the Seine-et-Marne, and the seat of one of its arrondissements. Its inhabitants are called Melunais.

Meledunum began as a Gaulish town; Caesar noted Melun as "a town of the Senones, situated on an island in the Seine"; at the island there was a wooden bridge, which his men repaired.[2] Roman Meledunum was a mutatio where fresh horses were kept available for official couriers on the Roman road south-southeast of Paris, where it forded the Seine.[3] Around 500 A.D, Clovis I granted Melun to a Gallo-Roman magnate, Aurelianus, who had fought for Clovis several times and apparently influenced his conversion to Christianity.[4]

The Normans sacked it in 845. The castle of Melun became a royal residence of the Capetian kings. Hugh Capet (See also: House of Capet) gave Melun to Bouchard, his favorite. In the reign of Hugh's son, Robert II of France, Eudes, the count of Champagne, bought the city, but the king took it back for Bouchard in 999. The chatelain Gautier and his wife, who had sold the city, were hanged; Eudes escaped. Robert died there in July 1031.

Robert of Melun (c. 1100 – 27 February 1167) was an English scholastic Christian theologian who taught in France, and later became Bishop of Hereford in England. He studied under Peter Abelard in Paris before teaching there and at Melun, which gave him his surname.

In July 1415, Melun was besieged by King Henry V of England, who had recently signed the Treaty of Troyes with King Charles VI of France. The town was in the hands of the Dauphin, later Charles VII of France, who had been dispossessed by the treaty. The defenders were led by Arnaud Guillaume, seigneur de Barbazan, and fought off the besiegers for fourteen weeks before capitulating.[5] The town was liberated by Joan of Arc on 17 April 1430.

The early viscounts of Melun were listed by 17th and 18th century genealogists, notably Père Anselme. Based on closer reading of the original documents, Adolphe Duchalais constructed this list of viscounts in 1844:[6]

Watercolor postcard showing Melun in the 1920s and circa 1095. 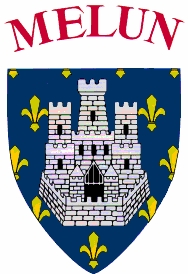 Melun Shield dating from the 15th century – "Melun (Seine-et-Marne): Azure on a semy-de-lys or a castle with three towers argent. Melun was one of the original strongholds of the royal domain. Motto: fida muris usque ad mures, recalling the siege of 1420 when inhabitants had to eat rats." http://www.heraldica.org/topics/france/frcitdep.htm

Melun is served by the Gare de Melun, which is an interchange station on Paris RER line D, on the Transilien R suburban rail line, and on several national rail lines.

The Collegiate Church of Notre-Dame, Melun was the original home of the Melun Diptych.

The nearby château of Vaux-le-Vicomte is considered a smaller predecessor of Palace of Versailles.

The officers' school of the French Gendarmerie is located in Melun.

Melun is the birthplace of:

There is one private high school/sixth form college:[12]

Wikimedia Commons has media related to Melun.
Wikisource has the text of the 1911 Encyclopædia Britannica article "Melun".
Prefectures of the departments of France
Communes in the Paris metropolitan area
Communes of the Seine-et-Marne department
Authority control
Categories
Categories: