In geometry, an octagon (from the Greek ὀκτάγωνον oktágōnon, "eight angles") is an eight-sided polygon or 8-gon.

A regular octagon has Schläfli symbol {8} [1] and can also be constructed as a quasiregular truncated square, t{4}, which alternates two types of edges. A truncated octagon, t{8} is a hexadecagon, {16}. A 3D analog of the octagon can be the rhombicuboctahedron with the triangular faces on it like the replaced edges, if one considers the octagon to be a truncated square.

Properties of the general octagon The sum of all the internal angles of any octagon is 1080°. As with all polygons, the external angles total 360°.

If squares are constructed all internally or all externally on the sides of an octagon, then the midpoints of the segments connecting the centers of opposite squares form a quadrilateral that is both equidiagonal and orthodiagonal (that is, whose diagonals are equal in length and at right angles to each other).[2]: Prop. 9

In terms of the circumradius R, the area is

In terms of the apothem r (see also inscribed figure), the area is

These last two coefficients bracket the value of pi, the area of the unit circle. 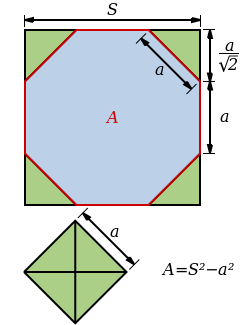 The area of a regular octagon can be computed as a truncated square.

The area can also be expressed as

where S is the span of the octagon, or the second-shortest diagonal; and a is the length of one of the sides, or bases. This is easily proven if one takes an octagon, draws a square around the outside (making sure that four of the eight sides overlap with the four sides of the square) and then takes the corner triangles (these are 45–45–90 triangles) and places them with right angles pointed inward, forming a square. The edges of this square are each the length of the base.

Given the length of a side a, the span S is

The span, then, is equal to the silver ratio times the side, a.

The area is then as above:

Expressed in terms of the span, the area is

Another simple formula for the area is

More often the span S is known, and the length of the sides, a, is to be determined, as when cutting a square piece of material into a regular octagon. From the above,

The two end lengths e on each side (the leg lengths of the triangles (green in the image) truncated from the square), as well as being

may be calculated as

The regular octagon, in terms of the side length a, has three different types of diagonals:

The formula for each of them follows from the basic principles of geometry. Here are the formulas for their length:[citation needed] building a regular octagon by folding a sheet of paper

A regular octagon at a given circumcircle may be constructed as follows: Octagon at a given circumcircle

A regular octagon can be constructed using a straightedge and a compass, as 8 = 23, a power of two: Each side of a regular octagon subtends half a right angle at the centre of the circle which connects its vertices. Its area can thus be computed as the sum of 8 isosceles triangles, leading to the result:

for an octagon of side a.

The coordinates for the vertices of a regular octagon centered at the origin and with side length 2 are:

Coxeter states that every zonogon (a 2m-gon whose opposite sides are parallel and of equal length) can be dissected into m(m-1)/2 parallelograms.[4] In particular this is true for regular polygons with evenly many sides, in which case the parallelograms are all rhombi. For the regular octagon, m=4, and it can be divided into 6 rhombs, with one example shown below. This decomposition can be seen as 6 of 24 faces in a Petrie polygon projection plane of the tesseract. The list (sequence A006245 in the OEIS) defines the number of solutions as 8, by the 8 orientations of this one dissection. These squares and rhombs are used in the Ammann–Beenker tilings. A skew octagon is a skew polygon with 8 vertices and edges but not existing on the same plane. The interior of such an octagon is not generally defined. A skew zig-zag octagon has vertices alternating between two parallel planes.

A regular skew octagon is vertex-transitive with equal edge lengths. In 3-dimensions it will be a zig-zag skew octagon and can be seen in the vertices and side edges of a square antiprism with the same D4d, [2+,8] symmetry, order 16.

The regular skew octagon is the Petrie polygon for these higher-dimensional regular and uniform polytopes, shown in these skew orthogonal projections of in A7, B4, and D5 Coxeter planes.

On the regular octagon, there are 11 distinct symmetries. John Conway labels full symmetry as r16.[5] The dihedral symmetries are divided depending on whether they pass through vertices (d for diagonal) or edges (p for perpendiculars) Cyclic symmetries in the middle column are labeled as g for their central gyration orders. Full symmetry of the regular form is r16 and no symmetry is labeled a1.

The most common high symmetry octagons are p8, an isogonal octagon constructed by four mirrors can alternate long and short edges, and d8, an isotoxal octagon constructed with equal edge lengths, but vertices alternating two different internal angles. These two forms are duals of each other and have half the symmetry order of the regular octagon. The octagonal floor plan, Dome of the Rock.

The octagonal shape is used as a design element in architecture. The Dome of the Rock has a characteristic octagonal plan. The Tower of the Winds in Athens is another example of an octagonal structure. The octagonal plan has also been in church architecture such as St. George's Cathedral, Addis Ababa, Basilica of San Vitale (in Ravenna, Italia), Castel del Monte (Apulia, Italia), Florence Baptistery, Zum Friedefürsten Church (Germany) and a number of octagonal churches in Norway. The central space in the Aachen Cathedral, the Carolingian Palatine Chapel, has a regular octagonal floorplan. Uses of octagons in churches also include lesser design elements, such as the octagonal apse of Nidaros Cathedral.

The octagon, as a truncated square, is first in a sequence of truncated hypercubes:

As an expanded square, it is also first in a sequence of expanded hypercubes: