Spacelab was a reusable laboratory developed by European Space Agency (ESA) and used on certain spaceflights flown by the Space Shuttle. The laboratory comprised multiple components, including a pressurized module, an unpressurized carrier, and other related hardware housed in the Shuttle's cargo bay. The components were arranged in various configurations to meet the needs of each spaceflight.

Artist's impression of the Spacelab 2 mission, showing some of the various experiments in the payload bay.

In August 1973, NASA and European Space Research Organisation (ESRO), now European Space Agency or ESA, signed a memorandum of understanding (MOU) to build a science laboratory for use on Space Shuttle flights.[2] Construction of Spacelab was started in 1974 by Entwicklungsring Nord (ERNO), a subsidiary of VFW-Fokker GmbH, after merger with Messerschmitt-Bölkow-Blohm (MBB), named MBB/ERNO, and merged into EADS SPACE Transportation in 2003). The first lab module, LM1, was donated to NASA in exchange for flight opportunities for European astronauts. A second module, LM2, was bought by NASA for its own use from ERNO.[3]

Construction on the Spacelab modules began in 1974 by what was then the company ERNO-VFW-Fokker.[4]

Spacelab is important to all of us for at least four good reasons. It expanded the Shuttle's ability to conduct science on-orbit manyfold. It provided a marvelous opportunity and example of a large international joint venture involving government, industry, and science with our European allies. The European effort provided the free world with a really versatile laboratory system several years before it would have been possible if the United States had had to fund it on its own. And finally, it provided Europe with the systems development and management experience they needed to move into the exclusive manned space flight arena. Spacelab was produced by European Space Research Organisation (ESRO), a consortium of ten European countries including:[7] STS-42 with Spacelab hardware in the orbiter bay overlooking Earth.

In addition to the laboratory module, the complete set also included five external pallets for experiments in vacuum built by British Aerospace (BAe) and a pressurized "Igloo" containing the subsystems needed for the pallet-only flight configuration operation. Eight flight configurations were qualified, though more could be assembled if needed.

The system had some unique features including an intended two-week turn-around time (for the original Space Shuttle launch turn-around time) and the roll-on-roll-off for loading in aircraft (Earth-transportation).[citation needed]

Spacelab consisted of a variety of interchangeable components, with the major one being a crewed laboratory that could be flown in Space Shuttle orbiter's bay and returned to Earth.[8] However, the habitable module did not have to be flown to conduct a Spacelab-type mission and there was a variety of pallets and other hardware supporting space research.[8] The habitable module expanded the volume for astronauts to work in a shirt-sleeve environment and had space for equipment racks and related support equipment.[8] When the habitable module was not used, some of the support equipment for the pallets could instead be housed in the smaller Igloo, a pressurized cylinder connected to the Space Shuttle orbiter crew area.[8]

Spacelab mission typically supported multiple experiments, and the Spacelab 1 mission had experiments in the fields of space plasma physics, solar physics, atmospheric physics, astronomy, and Earth observation.[9] The selection of appropriate modules was part of mission planning for Spacelab Shuttle missions, and for example, a mission might need less habitable space and more pallets, or vice versa.

Shuttle Columbia during STS-50 with Spacelab Module LM1 and tunnel in its cargo bay.

The habitable Spacelab laboratory module comprised a cylindrical environment in the rear of the Space Shuttle orbiter payload bay, connected to the orbiter crew compartment by a tunnel. The laboratory had an outer diameter of 4.12 m (13.5 ft), and each segment a length of 2.7 m (8 ft 10 in). The laboratory module consisted at minimum of a core segment, which could be used alone in a short module configuration. The long module configuration included an additional experiment segment.[10] It was also possible to operate Spacelab experiments from the orbiter's aft flight deck.[10]

Ten people inside the Spacelab Module in June 1995, celebrating the docking of the Space Shuttle and Mir

The pressurized tunnel had its connection point at the orbiter's mid-deck.[11] There were two different length tunnels depending on the location of the habitable module in the payload bay.[11] When the laboratory module was not used, but additional space was needed for support equipment, another structure called the Igloo could be used.[11]

Two laboratory modules were built, identified as LM1 and LM2. LM1 is on display at the Steven F. Udvar-Hazy Center at the Smithsonian Air and Space Museum behind the Space Shuttle Discovery. LM2 was on display in the Bremenhalle exhibition in the Bremen Airport of Bremen, Germany from 2000 to 2010. It resides in building 4c at the nearby Airbus Defence and Space plant since 2010 and can only be viewed during guided tours. 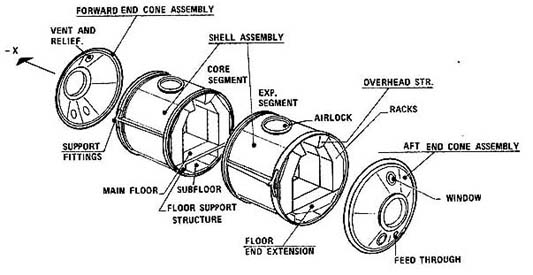 The Spacelab Pallet used to transport both Canadarm2 and Dextre to the International Space Station is currently at the Canada Aviation and Space Museum, on loan from NASA through the Canadian Space Agency (CSA).[12]

A Spacelab Pallet was transferred to the Swiss Museum of Transport for permanent display on 5 March 2010. The Pallet, nicknamed Elvis, was used during the eight-day STS-46 mission, 31 July – 8 August 1992, when ESA astronaut Claude Nicollier was on board Space Shuttle Atlantis to deploy ESA's European Retrievable Carrier (Eureca) scientific mission and the joint NASA/ASI (Italian Space Agency) Tethered Satellite System (TSS-1). The Pallet carried TSS-1 in the Shuttle's cargo bay.[13]

Another Spacelab Pallet is on display at the U.S. National Air and Space Museum in Washington, D.C.[14] There was a total of ten space-flown Spacelab pallets.[15]

A Spacelab Igloo is on display at the James S. McDonnell Space Hangar at the Steven F. Udvar-Hazy Center in the US.[18]

The IPS was a gimbaled pointing device, capable of aiming telescopes, cameras, or other instruments.[19] IPS was used on three different Space Shuttle missions between 1985 and 1995.[19] IPS was manufactured by Dornier, and two units were made.[19] The IPS was primarily constructed out of aluminum, steel, and multi-layer insulation.[20]

IPS would be mounted inside the payload bay of the Space Shuttle Orbiter, and could provide gimbaled 3-axis pointing.[20] It was designed for a pointing accuracy of less than 1 arcsecond (a unit of degree), and three pointing modes including Earth, Sun, and Stellar focused modes.[21] The IPS was mounted on a pallet exposed to outer space in the payload bay.[21]

The Spacelab 2 mission flew the Infrared Telescope (IRT), which was a 15.2 cm (6.0 in) aperture helium-cooled infrared telescope, observing light between wavelengths of 1.7 to 118 μm.[23] IRT collected infrared data on 60% of the galactic plane.[24]

The Extended Duration Orbiter (EDO) assembly was not Spacelab hardware, strictly speaking. However, it was used most often on Spacelab flights. Also, NASA later used it with the SpaceHab modules. Besides contributing to ESA missions, Germany and Japan each funded their own Space Shuttle and Spacelab missions. Although superficially similar to other flights, they were actually the first and only non-U.S. and non-European human space missions with complete German and Japanese control.[citation needed] Spacelab-4, Spacelab-5, and other planned Spacelab missions were cancelled due to the late development of the Shuttle and the Challenger disaster.

A golden-colored egg floating weightless on the Spacelab D1 mission, due to the continuous free-fall of being in orbit creating a microgravity environment on the spacecraft, 1985.

Spacelab was an extremely large program, and this was enhanced by different experiments and multiple payloads and configurations over two decades. For example, in a subset of just one part of the Spacelab 1 (STS-9) mission, no less than eight different imaging systems were flown into space. Including those experiments, there was a total of 73 separate experiments across different disciplines on the Spacelab 1 flight alone. Spacelab missions conducted experiments in materials, life, solar, astrophysics, atmospheric, and Earth science.[35]

Spacelab represents a major investment on the order of one billion dollars from our European friends. But its completion marks something equally important: The commitment of a dogged, dedicated, and talented team drawn from ESA Governments, universities, and industries who stuck with it for a decade and saw the project through. We are proud of your perseverance and congratulate you on your success.