A sweep is either of two categories of martial arts techniques. From standing, sweeps are throws or takedowns that primarily use the legs to attack an opponent's legs. On the ground, sweeps are techniques for reversing a grappling position.

When standing it is a technique used to take an opponent to the ground by knocking their legs out from under them, so is classed as a throw or takedown. The force of the sweep either runs perpendicular to the opponent's leg or rises as it strikes the leg, lifting the foot from the ground. A sweep can be used to take the opponent to the ground or it can simply disrupt the opponent's balance long enough to make an opening for a punch or kick. In Japanese it is known as ashi-barai. 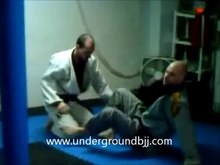 A sweep, when referred to in the context of ground fighting, is a technique used to transition from a neutral or inferior position to a dominant position, such as a practitioner moving from in an opponent's guard to full mount, hence the alternative term 'reversal' as the dominance of positions have been reversed.