Baguazhang or Pakua chang (Chinese: 八卦掌; pinyin: Bāguà Zhǎng) is one of the three main Chinese martial arts of the Wudang school, the other two being T'ai chi and Xing Yi Quan. It is more broadly grouped as an internal practice (or neijia quan). Bāguà zhǎng literally means "eight trigram palm", referring to the bagua "trigrams" of the I Ching (Yijing), one of the canons of Taoism.[1][2]

The creation of Baguazhang as a formalized martial art, is attributed to Dong Haichuan (董海川), who is said to have learned from Taoist and Buddhist masters in the mountains of rural China during the early 19th century.[3] Many Chinese authorities do not accept the Buddhist origin, instead maintaining that those teachers were purely Taoist in origin, the evidence lying in Baguazhang's frequent reference to core concepts central to Taoism, such as Yin and Yang theory, I Ching and Taoism's most distinctive paradigm, the Bagua diagram.[4] The attribution to Buddhist teachers came from the 2nd generation teachers, i.e. Dong Haichuan's students, some of whom were Buddhist. There is evidence to suggest a synthesis of several pre-existing martial arts taught and practised in the region in which Dong Haichuan lived, combined with Taoist circle walking. Through his work as a servant in the Imperial Palace he impressed the emperor with his graceful movements and fighting skill, and became an instructor and a bodyguard to the court.[5] Dong Haichuan taught for many years in Beijing, eventually earning patronage by the Imperial court.[6]

Famous disciples of Dong Haichuan to become teachers were Yin Fu (尹福), Cheng Tinghua (程廷華), Ma Gui (馬貴), Song Changrong (宋長榮), Liu Fengchun (劉鳳春), Ma Weiqi (馬維棋), Liu Baozhen (劉寶珍), Liang Zhenpu (梁振蒲) and Liu Dekuan (劉德寛). Although they were all students of the same teacher, their methods of training and expressions of palm techniques differed.[2] The Cheng and Liu styles are said to specialize in "pushing" the palms, Yin style is known for "threading" the palms, Song's followers practice "Plum Flower" (梅花 Mei Hua) palm technique and Ma style palms are known as "hammers." Some of Dong Haichuan's students, including Cheng Tinghua, participated in the Boxer Rebellion. In general, most bagua exponents today practice either the Yin (尹), Cheng (程), or Liang (梁) styles, although Fan (樊), Shi (史), Liu (劉), Fu (傅), and other styles also exist. (The Liu style is a special case, in that it is rarely practiced alone, but as a complement to other styles). In addition, there are sub-styles of the above methods as well, such as the Sun (孫), Gao (高), and Jiang (姜) styles, which are sub-styles of Cheng method. 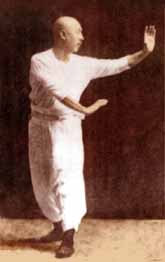 The practice of circle walking, or "turning the circle", as it is sometimes called, is Baguazhang's characteristic method of stance and movement training. All forms of Baguazhang utilize circle walking as an integral part of training. Practitioners walk around the edge of the circle in various low stances, facing the center, and periodically change direction as they execute forms.[7] For a beginner, the circle is six to twelve feet in diameter.[5] Students first learn flexibility and proper body alignment through the basic exercises, then move on to more complex forms and internal power mechanics. Although the internal aspects of Baguazhang are similar to those of Xingyiquan and Taijiquan, they are distinct in nature.

Many distinctive styles of weapons are contained within Baguazhang; some use concealment, like the "judge's pen" (Chinese: 判官筆; pinyin: Pànguān Bǐ) or a pair of knives (the most elaborate, which are unique to the style, are the crescent-shaped deer horn knives (Chinese: 鹿角刀; pinyin: Lùjiǎodāo). Baguazhang is also known for practicing with extremely large weapons, such as the bāguà jian (八卦劍), or bagua sword, and the bāguà dāo (八卦刀), or bagua broadsword. Other, more conventional weapons are also used, such as the staff (gun), spear (qiang), cane (guai), hook sword (gou) and the straight, double-edged sword (jian). Baguazhang practitioners are also known for being able to use anything as a weapon using the principles of their art.

Baguazhang contains an extremely wide variety of techniques as well as weapons, including various strikes (with palm, fist, elbow, fingers, etc.), kicks, joint locks, throws, and distinctively evasive circular footwork. As such, Baguazhang is considered neither a purely striking nor a purely grappling martial art. Baguazhang practitioners are known for their ability to "flow" in and out of the way of objects.[citation needed] This is the source of the theory of being able to fight multiple attackers.[8][9][10] Baguazhang's evasive nature is also shown by the practice of moving behind an attacker, so that the opponent cannot harm the practitioner.

Although the many branches of Baguazhang are often quite different from each other (some, like Cheng style, specialize in close-in wrestling and joint locks, while others, like some of the Yin styles, specialize in quick, long-range striking), all have circle walking, spiraling movement, and certain methods and techniques (piercing palms, crashing palms, etc.) in common.