Goloka (Sanskrit: गोलोक), or Goloka Vrindavan (गोलोक वृन्दावन, IAST: Goloka Vṛndāvana), is the eternal supreme abode of the Hindu god Krishna and his consort Radha.[1][2] In the Bhagavata Purana, Krishna is portrayed as the highest person who resides in Goloka.[3]

According to the Gaudiya Vaishnava philosopher Jiva Goswami, Goloka, also called Vrindavan, is the highest spiritual planet and can be further manifested into three abodes, called Mathura, Dwarka and Gokula, according to the difference in the pastimes and associates of Krishna.[4]

Goloka is mentioned in Gaudiya Vaishnavism, the Swaminarayan Sampraday, the Pranami Sampraday, Pushtimarg and the Nimbarka Sampradaya, and in scriptures such as the Pancharatra texts,[5] the Garga Samhita,[6] Brahma Samhita, Brahma Vaivarta Purana and Devi-Bhagavata Purana.

Goloka literally means "World of cows".[7] The Sanskrit word go refers to "cow" and loka is translated as "realm."

Lord Krishna is also known as Gaulokvihari (vihari means "a resident of") since he is a resident of Goloka and his consort Radha is called Radhika.[8] The Shri Swaminarayan Mandir in Mumbai has two murtis dedicated to this particular form of the gods. 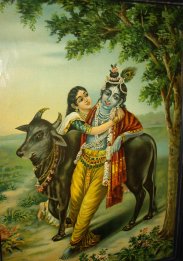 A description of Goloka can be found in the Brahma Samhita, verse 5.29:

"I worship Govinda, the primeval Lord, the first progenitor, who is tending the cows, yielding all desires, in abodes built with spiritual gems and surrounded by millions of purpose trees. He is always served with great reverence and affection by hundreds and thousands of devotees resembling goddesses of fortune."

Sanatana Goswami, an author of a number of important works in the bhakti tradition of Gaudiya Vaishnavism, states, "Sri Goloka is considered the ultimate destination of spiritual endeavour."[9]

Acharyas of Gaudiya Vaishnavaism explains it to be limitless. Both Vaikuntha and Goloka are considered to be Nitya Dhama (eternal realm of existence) which are not prone to annihilation even after the whole cosmic dissolution. Krishna in his two-armed form eternally reside in the realm of Goloka and in his four-armed form, as Vishnu he eternally resides in the realm of Vaikuntha loka.[citation needed]

Mention of Goloka is also found in other Puranas, such as Skanda Purana and Markandeya Purana. In Brihad-bhagavatamrita, Sanatana Goswami explains this verse is quoted from Skanda Purana and it is spoken by Krishna to Arjuna,

Golokam ca parityajya lokanam trana-karanat kalau gauranga-rupena lila-lavanya-vigrahah. "In the Kali-Yuga, I will leave Goloka and, to save the people of the world, I will become the handsome and playful Lord Gauranga."