Largest of the five "systems commands" of the United States Navy

The Naval Sea Systems Command (NAVSEA) is the largest of the United States Navy's five "systems commands," or materiel (not to be confused with "material") organizations. From a physical perspective, NAVSEA has four shipyards for shipbuilding, conversion, and repair, ten "warfare centers" (two undersea and eight surface), the NAVSEA headquarters, located at the Washington Navy Yard, in Washington D.C., and other locations in 15 states and 3 overseas continents.

NAVSEA's primary objective is to engineer, build, buy, and maintain the U.S. Navy's fleet of ships and its combat systems. NAVSEA's budget of almost $30 billion accounts for nearly one quarter of the Navy's entire budget, with more than 80,200 personnel and 150 acquisition programs under its oversight.[1] 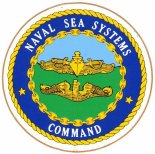 The origin of NAVSEA dates to 1794, when Commodore John Barry was charged to oversee the construction of a 44-gun frigate and ensure that all business "harmonized and conformed" to the public's interest.[2] Since then various organizations were established and succeeded them to oversee design, construction and repair of ships and ordnance.

The Naval Ship Systems Command was established in 1966 replacing BuShips.[3]

The following are the current and previous NAVSEA commanders to 1998:

NAVSEA's six affiliated Program Executive Offices (PEOs) are responsible for the development and acquisition of Navy and Marine Corps platforms and weapons systems. PEOs report to the NAVSEA commander for planning and execution of in-service support, and to the Assistant Secretary of the Navy (Research, Development and Acquisition) for acquisition-related matters.[15]

The NAVSEA affiliated PEOs are:

NAVSEA has numerous field activities geographically dispersed throughout the country that are providing the engineering, scientific, technical and logistical expertise, products and support to the Fleet, Department of Defense, and other customers.[16]